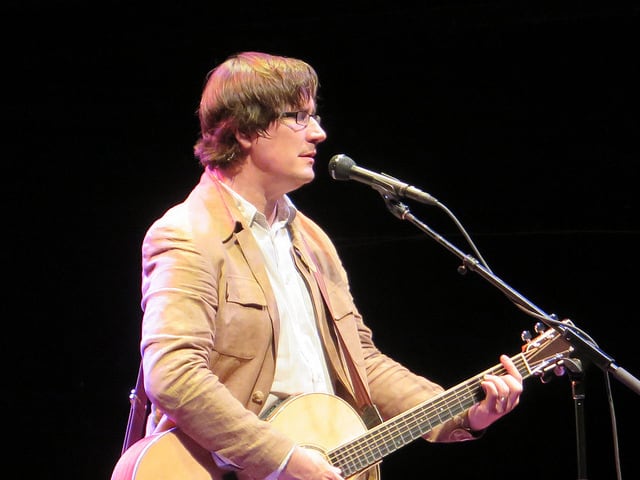 By now, a Mountain Goats concert fulfills the same needs as a new Mountain Goats record. John Darnielle not only puts out routinely great albums at what seems like a bi-annual clip, he hasn’t produced one stinker since he started in the ‘90s. Sure, some releases are better than others, but a new Mountain Goats album is comforting in its uniform excellence. Darnielle’s concert appearances are just as consistent, and since he tours almost ceaselessly, it’s easy to take his manic performance style for granted.

Blank Range kicked things off that night at the Wonder Ballroom, an up-and-coming band benefiting from the sold out crowd that came out to see the headliners. Hailing mainly from Illinois, the members of Blank Range convened in Nashville, combining elements of Wilco’s music with more avant leanings. The band even got to play Bonnaroo by winning a contest.

That night at the Wonder, Blank Range dipped into songs from its EP Phase II to warm up the crowd. Although many of the songs had a warm, bar band feel, there is something deeper at play in their music. Though some of the people in the balcony blithely chatted during the set, most of the folks down on the floor gave the fledgling band their attention and even gravitated to the merch table to grab some Blank Range T-shirts or LPs.

If you haven’t been paying attention to the Mountain Goats, then you would have no idea why Darnielle talked so much about professional wrestling that night at the Wonder. Darnielle has always been obsessive, and with new album Beat the Champ, he revealed that as a kid he was a wrestling aficionado. And we’re not talking about the WWF, but down and dirty pro stuff where people sliced each other up.

The 20-song set consisted of two full band sections and a middle moment where Darnielle played a handful of songs solo. While songs from Beat the Champ figured prominently in the set, the Mountain Goats always mix in deeper cuts and fan favorites during a show. Hell, Darnielle even kicked off the show with “Blood Capsules,” a leftover from the Beat the Champ sessions.

In all honesty, I think Beat the Champ is a weaker release, but if you read my intro, you will know that I still enjoy it. In the live setting, the new songs did have a chance to blossom, forcing me to reconsider my first reaction to the album (though “Fire Editorial” and “Stabbed to Death Outside San Juan” still aren’t very good). However, “Foreign Object” is a crowd pleasing anthem about sticking something in someone’s eye and “Heel Turn 2” is a melancholy slice of folk rock about changing alignments from good to evil.

While the set featured songs that only obsessives would know (such as the unreleased “Passaic, 1975” and “Black Pear Tree,” a song Darnielle recorded for an EP with Kaki King), the band closed the night out with some crowd favorites, namely three songs from The Sunset Tree (“Up the Wolves,” “Love Love Love” and “This Year”) before coming out for a second encore with “No Children.”

A Mountain Goats concert circa 2015 may not yield many surprises, but there is nothing wrong with consistency. Unless you aren’t a fan of professional wrestling. But that’s okay, Darnielle will be more than happy to tell you about it.

Relic suffers from a crisis of identity, just like the story it sidesteps instead of fully…