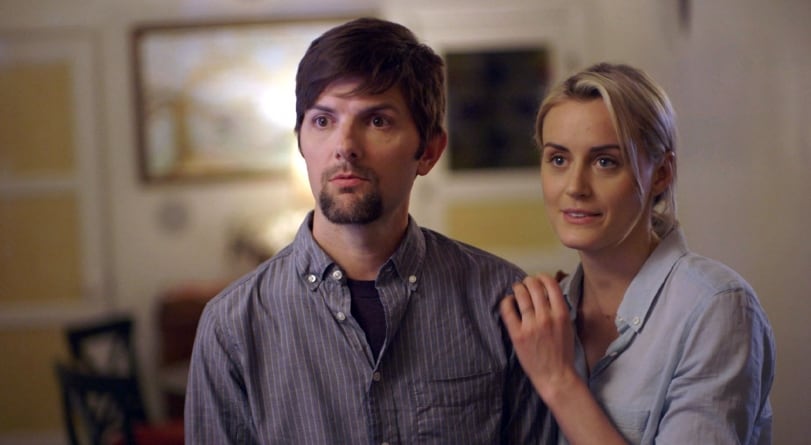 Over the course of the evening, secrets come out, but not necessarily in the ways you would expect.

Does anyone do obsequious better than Jason Schwartzman? It has been nearly 20 years since the actor broke through with Rushmore and since then he has made a career of playing foppish kings, self-absorbed layabouts and hopeless bachelors. There is an obnoxious streak to the actor, one that lends itself perfectly to his character in The Overnight, writer/director Patrick Brice’s new comedy about what happens when two couples having a dinner party shift from getting-to-know-you small talk to something much more intimate.

Cute couple Alex (Adam Scott) and Emily (Taylor Schilling) have just moved to Los Angeles, still adjusting to the new climate and culture. Friendless and lonely, the pair meets the gregarious Kurt (Schwartzman) at the playground when their young sons appear to hit it off. Kurt invites the family to his home for a dinner party with his French wife, Charlotte (Judith Godrèche). Excited by the opportunity of meeting new friends, Alex and Emily accept. However, once their children go to sleep, the party begins to take a turn for the weird.

At first, Scott and Schilling play it straight as Schwartzman and Godrèche reveal new and shocking layers to their characters. Charlotte is an actress, but the only work she has done is model in a breast pump video. They live in a palatial house in the hills, but Kurt is cagey about what he does for a living—instead he talks about a water filtration system he has invented that turns sewage into pure drinking water and shows off his paintings of anuses.

They both are extremely flirty and eventually Kurt suggests they all go skinny dipping. Meanwhile, Alex and Emily wonder if they should go home or stay and stop being a pair of squares. This is what California is all about, right?
The Overnight works because no matter how preposterous some of its moments may be (Charlotte takes Emily to a Thai massage parlor so she can watch her jerk off a customer), the characters and their fears do ring true. When Kurt and Charlotte get naked and jump into the pool, Alex and Emily hang back, hamstrung not only by social conventions but very real body image issues. When Kurt learns the truth, his sensitive handling of the situation proves that Brice is after something deeper than a simple sex comedy. Each of the four characters is grappling with a secret desire, one that is difficult to share with their spouse. Over the course of the evening, these secrets come out, but not necessarily in the ways you would expect.

The Overnight only cops out at the end when an unexpected twist is turned into a punchline and then a pat denouement even further drives home the point. It could have been a sensitive, yet hilarious view on the pros and cons of polyamory, but instead The Overnight keeps its Puritanical card in its sleeve for the final reel, one that will certainly trump any dissenting viewpoints with the way it negates all the soul-searching and sharing that preceded it.