The Holocaust has been a fecund pool for filmmakers, a quagmire of the horrific from which cinematic scenarios gallant and exploitative have emerged. For every noble work such as Shoah or Au Revoir Les Enfants, there are also films such as The Reader and Shining Through, high-minded dramas that use the milieu for effect rather than truly digging out an understanding amidst the madness. Holocaust films often fall on either side of that dividing line (unless you’re Quentin Tarantino who gleefully exploits it with two fists in his masterful Inglourious Basterds). The Night Porter, however, Liliana Cavani’s 1974 melodrama, firmly straddles this demarcation between the sacred and profane.

The Night Porter is a provocation, a fever dream of a movie about Holocaust survivor Lucia (Charlotte Rampling) who runs into the SS officer (Dirk Bogarde) with whom she had a relationship a decade later. It is 1957 in Vienna, a huddled city of cloudy melancholy. We meet Max (Bogarde), now a porter at a hotel. Still in touch with his SS comrades, Max is awaiting a “trial” in a kangaroo court, one designed to absolve him of any guilt from his wrongdoings a decade prior. Part of the trial involves identifying and “filing away” any witnesses. But then his former lover appears at the hotel with her American husband and Max cannot bring himself to kill her.

Max differs from the other former Nazis because he suffers from guilt. In a series of flashbacks, we watch as Max degrades Lucia, all shorn and wan from the atrocities of the concentration camp. Eventually, the relationship becomes transgressive, as Lucia obviously falls for her tormenter and vice versa. When they reunite in Vienna, they reignite the sadomasochistic games, eventually locking themselves into Max’s apartment, a stand-in for the concentration camp where they were both marked by the Holocaust. 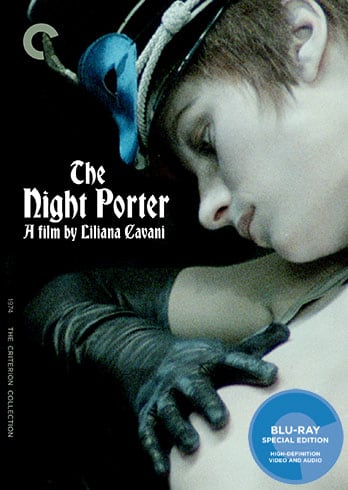 But there is more at play here than just kinky sex. In the first flashback, we see a nude Rampling in line with a group of other naked prisoners. She is not Jewish, however, but the daughter of a social activist. As she awaits her turn for examination, Max stalks the line, filming with a movie camera. When he gets to Lucia, he pauses and closes in, her body beautiful and angular despite the dreadful conditions. Cavani uses the camera to implicate not only Max as a voyeur, but her audience as well. Isn’t that what we do with cinema? We watch as things awful and magnificent unfold with the same prurient glee.

Max may have held the upper hand in the ‘40s, but in 1957 Lucia attempts to level the playing field. She leaves her husband, an orchestra conductor on tour in Europe, to begin the affair again. Max’s comrades know about Lucia and despite their pleas that he silence her, Max cannot give her up, putting his own life at risk when he barricades them both in his apartment. As they run out of food, the place becomes a mess and they begin to starve. Resembling their past iterations, the couple recreate the horrific moment in history that branded them. These are characters scarred by an experience, ones who ceased living a decade prior.

Cavani has no troubles playing to the lurid. In the most controversial flashback, Rampling is topless, dressed in pants and suspenders, singing for a cadre of SS men in a Nazi hat. Rampling is all lines and angles, her nearly androgynous body rippling as she plays Salome. Cavani shoots the scene suggestive of German expressionism, some of the Nazis masked, the scene cloudy. This passage stands in stark contrast to an earlier flashback where the Nazis watch one of their brethren, a classical trained dancer, performs in little more than a thong. In an interview, Cavani claimed that the SS was a homosexual cult, one that could potentially crumble under the power of female sexuality. Rampling’s dance proved too much for Max, trapping him, while his potentially gay comrades remained unmoved.

Both Bogarde and Rampling give sympathetic performances despite the shocking subject matter. When they leave the apartment to face their doom, it is hard not to feel sorry for the characters. Cavani, who cut her teeth making two documentaries about Nazis before writing The Night Porter, may use some exploitative elements to further her film, but she remains true to the subject, delving into the madness in search of fruitless answers rather than using the Holocaust to simply tell a story.