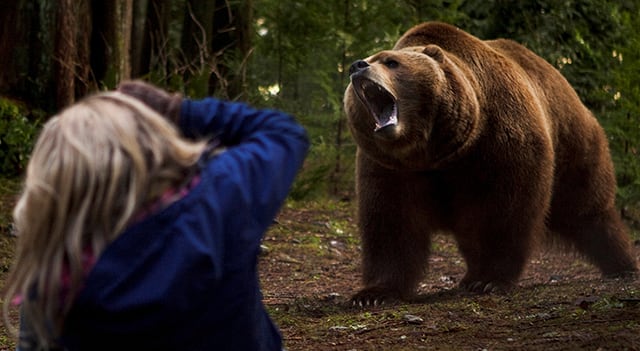 Into the Grizzly Maze Drew Hunt

Partially inspired by the exploits of Timothy Treadwell, the renegade environmentalist and grizzly bear fanatic who died at the hands of the same animals he sought to protect, Into the Grizzly Maze is an ultra-masculine man-versus-nature thriller that comes hot on the heels of the similarly themed Backcountry. In that film a city-slicker couple found themselves in a Deep Water-esque pickle with a predatory black bear while camping. Its director, Adam McDonald, turned the story into a somewhat effective relationship drama about male-female relations at their most exigent. Into the Grizzly Maze, on the other end, is all man. Brothers Rowan (James Marsden) and Beckett (Thomas Jane) flex egos and measure dicks while guiding two helpless women—one deaf, the other crippled—through an Alaskan forest thick with grizzlies. One uncommonly gargantuan bear, portrayed by animal performer Bart the Bear, proves especially troublesome, having already gobbled up some poachers and a local cop, and its up to the woods-savvy siblings to stop it from wreaking more havoc.

Bears and brothers match wits as a banal family melodrama unfolds. Rowan is a misunderstood bad boy with a criminal record; Beckett is a by-the-books sheriff’s deputy who doesn’t approve of Rowan’s reckless behavior. Their reconciliation being a foregone conclusion, the story is devoid of legitimate stakes and proves tedious, occasionally alleviated by Billy Bob Thornton in a quirky supporting turn as Douglass, an enigmatic grizzly expert whose murky motives supply some decent suspense. Otherwise, Into the Grizzly Maze is a prosaic, unimaginative monster movie that leans heavily on the hope that the audience might find the whole thing absurd enough to be funny; this is a midnight movie made by people who don’t understand midnight movies.

The film belongs to a particular subset of animal attack B-movies that cropped up around the time of Steven Spielberg’s Jaws. Charming dredge like Alligator, Piranha, Orca and even the similarly themed Grizzly fit the bill way back when, but Into the Grizzly Maze is a decidedly more staid beast whose straight-to-video pleasures—gratuitous violence, hammy over-acting, Adam Beach playing a character named Johnny Cadillac—are few and far between. Director David Hackl rarely engages with the material, shooting potentially thrilling action sequences in tight, shaky closeups that deny the viewer both a proper sense of the action as well as a good look at the bear antagonist. The director’s aversion to wide-screen photography is evident throughout; the film was shot in the lush forests of British Columbia, but the bland images of mountainous terrain and wooded landscapes resemble stock footage and Windows 2000 wallpaper.

In the hands of a more daring or perhaps less self-serious director, Into the Grizzly Maze might have gelled into perfectly harmless genre entertainment. Shoehorned alongside the SyFy Channel-esque narrative is a painfully earnest if undercooked environmentalist screed. The film posits that man is to blame for the bear’s aggressive behavior, a notion that lies in the greater understanding that man’s presence on earth is having an adverse effect on nature, but the idea is so feebly presented that any sociopolitical significance falls by the wayside. It’s enough to make you yearn for the adventurous “bad” filmmaking of Alligator and its ilk. Those films flipped the idea of “bad,” turning it into irreverence and personality. Into the Grizzly Maze isn’t “so-bad-it’s-good.” It’s just bad.