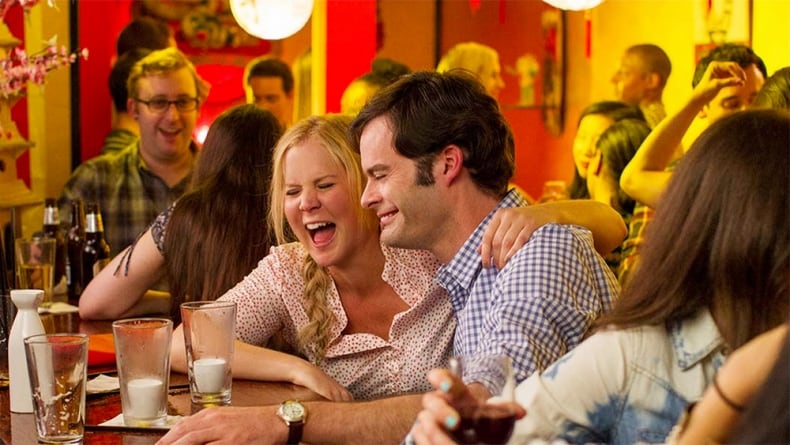 Judd Apatow has been making the same romantic comedy for years now.

By this point in his career, it is easy to recognize the formula Judd Apatow employs in his filmmaking. He has been making the same romantic comedy for years now: a pair of losers eventually gets past their arrested development to find true love. All of his films feature gross-out gags, dick jokes and they suffer from extreme over length. But peel away the bad language and drugs and you will find a heart gooey enough that Reese Weatherspoon would have trouble passing on the script. It’s the perfect formula for date night, this meeting of the profane and the sappy.

Even if Trainwreck features a female lead, it is no different than the rest of Apatow’s films. In The 40-Year-Old Virgin and Knocked Up characters break out of romantic comedy tropes and fall in love, shrugging off their self-imposed handicaps to care about another human being. This time, Amy Schumer (who wrote the script) takes on the Apatow torch, playing a character who drinks too much, can’t commit to monogamy and doesn’t look like Julia Roberts. And like the breakout performances of Steve Carell and Seth Rogen in past Apatow films, Schumer carries Trainwreck with her damaged, yet endearing character.

Riffing on the same character that made her Comedy Central show such a success, Schumer plays Amy, a journalist who simply cannot commit to one man. When we first meet Amy, she is a little girl, being lectured by her rakish father (Colin Quinn) about why monogamy does not work. Flash forward 23 years later and Amy is the trainwreck of the film’s title. Her younger sister (Brie Larson) has it all figured out, living in the suburbs with her husband and step-son. Meanwhile, Amy is still out partying, fucking endless guys and kicking them out of her New York apartment before they can commit to sleeping over. Her job fits her persona perfectly, writing for a men’s magazine which features articles such as “Am I Gay or Are You Boring?” Then, Amy is assigned a story about a sports surgeon (Bill Hader), a nice guy who actually shows interest in her. Does Amy finally allow herself to fall in love or is he just another notch on her bedpost?

By now, we know how Apatow feels about relationships and his conventionality will win out. It doesn’t take long for Amy and the good doctor to fall into each other’s arms, yet her phobia to commitment tosses in some impediments before the film’s implausible ending. It’s all predictable but Schumer’s firecracker performance and strong turns from a supporting cast including Quinn, Tilda Swinton (as Amy’s asshole editor) and LeBron James (as himself in a hilarious turn) keep the film chugging despite its onerous runtime. Trainwreck lives and dies with Schumer, but she picked the right director to wring sympathy out of a character who is looking for love, yet may be too damaged to find its restorative powers.