It’s not only Sirk’s flair for melodrama that attracted Fassbinder to his films.

Rainer Werner Fassbinder’s obsession with the films of Douglas Sirk doesn’t start and end with Ali: Fear Eats the Soul (1974). It’s not only Sirk’s flair for melodrama that attracted Fassbinder to his films, but the way he portrayed his female characters struggling against the confines imposed by society. In Ali, his middle-aged protagonist not only falls for a man decades her junior, but one from Morocco with dark skin. Todd Haynes also played with the milieu in Far from Heaven (2002), adding homosexuality to his Technicolor nightmare. Fassbinder beat Haynes to the punch by 30 years, however, featuring a demoniac lesbian love affair in his all-female The Bitter Tears of Petra von Kant (1972).

Though The Bitter Tears of Petra von Kant is a melodrama, Fassbinder uses the film to explore the conflicts inherent in his own life. Reeling from a love affair with actor Günther Kaufmann, Fassbinder poured his own feelings into the script, which initially appeared as a work of theater. Fassbinder would do the same thing in Ali, which explored his feelings for lead actor El Hedi ben Salem. But Ali has a wider scope by actually portraying how the people around the lovers feel about the relationship. Petra von Kant is much more internal, the struggle taking place through the titular character’s slow emotional breakdown. And how better to tell a story about people trapped by an overbearing society than shoot the entire film in more or less one claustrophobic room? 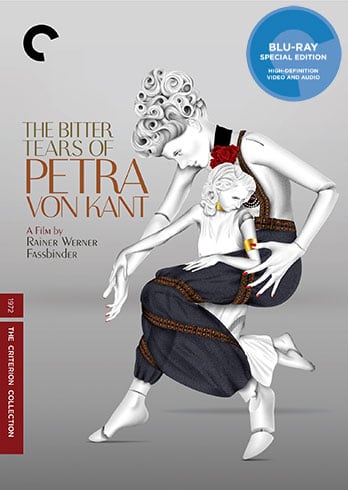 Told in four distinct acts (and a short epilogue), all of The Bitter Tears of Petra von Kant takes place in a spare apartment. Petra (Margit Carstensen) is a fashion designer who has reached her mid-thirties. She has more or less sealed herself off from the world, spending her time lounging in bed and fielding phone calls and visits from friends and admirers. Her work is supposedly in demand, but we don’t see her do much more than strut, fret, drink gin and mistreat her servant, Marlene (Irm Hermann), who appears to be the one doing all the work, never uttering a word and suffering her mistress’ harsh words in silence. A large, classical painting fills up an entire wall in Petra’s bedroom, a bacchanal where Fassbinder often positions his actresses just under the pointing member of a male nude.

Throughout the film, Fassbinder features Petra receiving visitors, dressed in a different wig and provocative dress, each signifying just how she is feeling at the moment. The most damaging visit comes in the second act in the form of Karin (Hanna Schygulla), a young, down-on-her-luck actress who Petra instantly falls in love with, offering to take her under her wing and use her tutelage to further her career. Cinephiles will know where this is going, especially since Petra has Marlene write a letter to Joseph Mankiewicz at the beginning of the movie. Though Karin appears grateful for Petra’s affections and financial support, by the time we arrive at the third act the love affair has already soured. Karin has gotten what she needed and tortures Petra, recounting a tryst she had the evening before with a black man. She continues to taunt Petra until she receives a phone call from her estranged husband. Asking Petra for money to meet him, she leaves and the scene ends, priming the audience for the film’s devastating final act.

The Bitter Tears of Petra von Kant is very much an elliptical film, with much going on between after fade to black and when we return to the characters. As Petra’s world crumbles apart, Fassbinder allows for her final breakdown by framing the movie as melodrama. In this final section, Petra is stripped bare of her makeup and wig, her collapse in front of her mother and her daughter a purifying moment. Fassbinder said that writing The Bitter Tears of Petra von Kant was a therapeutic experience for him. Filtering his anguish through a cast of women is his masterstroke here, one that makes this one of the most forward thinking films of the early ‘70s.