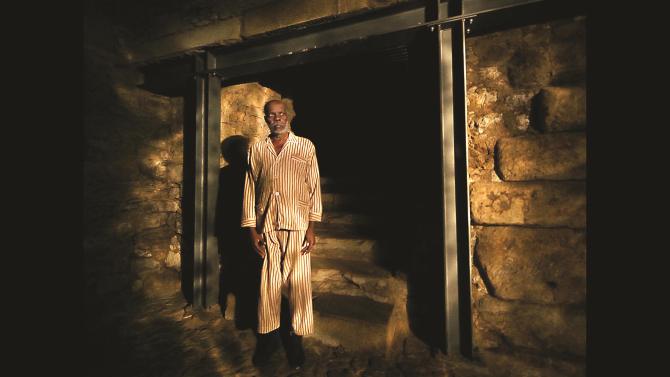 Horse Money is the culmination of a career founded upon constant aesthetic and, more importantly, ethical revision.

Horse Money is the culmination of a career founded upon constant aesthetic and, more importantly, ethical revision. From the moment Pedro Costaâ€™s second film, Casa de Lava, attempted to add social relevance the bold but self-contained style of his first film, O Sangue, the director has consistently pushed his work to address gaps in his narrative focus on Portugalâ€™s immigrant community and the implications of his own involvement with non-professional actors in their neighborhoods. True to form, Horse Money is a response to his previous film, Colossal Youth, which found the Fontainhas slum where the director set his prior two films razed to the ground and replaced with uniform tower blocks, being roamed by an old local named Ventura who searched the area as if trying to find the culture that had been bulldozed by the government. It was a film of the conscious present.

Horse Money again follows Ventura, but this time in the dead of night, using deep chiaroscuro that leaves most of any given frame in total blackness. As Ventura walks through dessicated catacombs and hospital corridors, hands trembling violently from an unspecified condition vaguely blamed on mold, he slips imperceptibly into his past. Often, this entails nothing more than the manâ€™s rambling, dissociative monologues, in which he regresses to his teenage years as a Cape Verdean immigrant hiding from soldiers in Portugalâ€™s Carnation Revolution. Occasionally, spectres of those blurred memories manifest before Ventura, from comrades urging him to stay in the fight to soldiers and inquisitors who corner him in streets, holding machetes to his throat, or who question him on hospital beds, using surgical lamps as interrogation spotlights.

Costa, using primarily static takes in frozen tableaux that imply or directly follow violence instead of showing it, films each scene as a self-contained, unconnected fragment, with Ventura acting as both the curator and guest of a gallery of his own mind. This anti-sequential, untethered approach allows Costa to tackle a complex sociopolitical history in the abstract, using dream logic to investigate topics with no didactic message nor even any clear vantage point. The camera, rigid and unnatural, obviously signals a third party, but everything in the frame seems to be a projection of Venturaâ€™s mind, creating an irreconcilable split that the director emphasizes instead of masks. Adding to this surreal displacement is Costaâ€™s use of video: the director used standard-definition video in his previous two features to film the working-class Fontainhas community without bringing in the noisy crews and invasively bright lighting required for 35mm shoots, but Horse Money leaps to hi-def video.

Crucially, Costa still does not adopt higher-grade 2K or 4K digital, and instead he uses the inherent image-artifacts and limitations of the format to his advantage. The low-light capacities of digital serve the directorâ€™s Caravaggian compositions well, but so does the aggressive sharpness of the image quality, which embodies its own contradiction in making images so tactile that they feel more distant and unreal than anything in his previous work. In some shots, you can count the individual clumps of hair in Venturaâ€™s patchy beard; in others, the whites of his eyes seem to throb with radioactive intensity. Itâ€™s safe to say that no film looks like this, even if Costa does dredge up many of his favorite references, from the symbolism of the overlapping doorways of John Fordâ€™s films to the subtly politicized still frames and actor-model declamations of the films of Straub-Huillet.

Those influences are there, but the director channels them into images that take history and remembrance, not cinephilia, as their subject,. When Ventura is visited by Vitalina, an old acquaintance from Cape Verde who has come to Portugal for her husbandâ€™s funeral, the two share an exchange on an apartment rooftop that Costa initially shoots as piercing close-ups before pulling back into a two-shot of them cocooned within the lit units of apartments across the way, the network of lights forming a shattered halo that evokes Portugalâ€™s broken promise of providing a better life to its immigrants. Vitalina gets an arguably even more powerful scene that sets her dark skin against a blinding white light as she reads the contents of her birth certificate and the other legal documents she must keep on her at all times to prove her identity to a government waiting to deport anyone it deems does not belong. Once again the film makes the most of digital, managing not only to blot out Vitalinaâ€™s features but to remain detailed enough to capture the tears streaming down her face as she reads aloud, acutely aware that, for so many, her entire life can be boiled down to the simplistic factoids printed on a few sheets of officially stamped paper.

With its oneiric tone, the film forms a recursive loop with Costaâ€™s other movies, returning to the atmospheric, nighttime adventures of his debut but replacing the imagination of youth with the haunting, inescapable memories of age. Venturaâ€™s quaking shuffle and blank stare could also position him as an avatar for Isaac de BankolĂ©â€™s Tourneurian zombie in Casa de Lava, but with one key difference. De BankolĂ© found himself used as nothing more than a silent model in Costaâ€™s planned statement on the legacy of Portuguese colonialism, and eventually the irony of the filmmaker denying a voice to a person a color to comment on the denial of indigenous voices grew so unbearable that de BankolĂ© slugged him. Here, however, Costa respects his subject, and if the film investigates Venturaâ€™s recollections of hiding during the countryâ€™s 1974 coup and subsequent life of hardship through its elliptical, minimal-expressionist imagery, it nonetheless attempts to capture Venturaâ€™s emotional tenor over the analytical observation of the director. Like so many of his young artist friends, Costa benefitted immeasurably from the Carnation Revolutionâ€™s overthrow of fascism and lessening of censorship, but he deliberately seeks out a man whose existence is a testament to the exclusionary failures of that movement. Costa has been one of the worldâ€™s foremost filmmakers almost since he started, back in 1989. Far, far more importantly, he is one of the few white male directors who consistently critiques his privileged vantage point, and the political dreamscape of Horse Money represents his most successful attempt yet to address Portugalâ€™s history of xenophobic negligence on civic and artistic levels, as well as the concessions and collaboration necessary for an artist like Costa to even try to tell such a story.