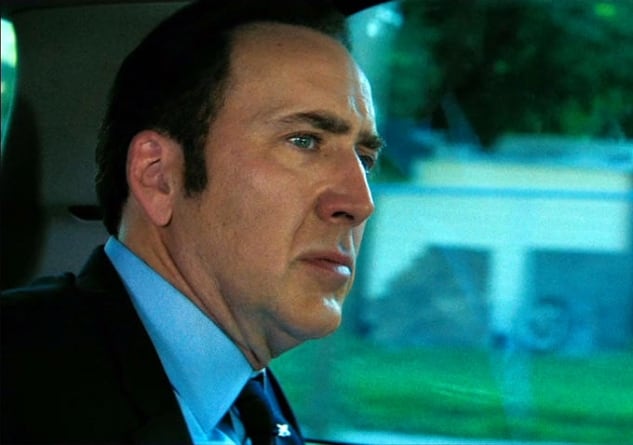 It’s easy to imagine actor Nicolas Cage arising not from the Coppola dynasty, but from primordial swampland.

It’s easy to imagine actor Nicolas Cage arising not from the Coppola dynasty, but from primordial swampland. So it makes sense that New Orleans has been the scene of some of his hammiest performances in a pork-filled career. From the lustful artist of Zandalee to the corrupt lead of Bad Lieutenant, Cage seems invigorated by the bayou, and that may be why Cage recently bought a pyramid-shaped tomb in the city’s famed St. Louis Cemetery No. 1. Cage returns alive to the Big Easy for The Runner, a political drama that is arguably better than some of Cage’s recent choices. But given his nearby funeral plans, it seems like yet another sign that the actor is simply marking time until death and his inevitable return to the swamp from whence he emerged.

Torn from the headlines, but without much passion, The Runner is set in the aftermath of the 2010 BP oil spill in the Gulf of Mexico, and includes news footage of some of the wildlife affected by the disaster. Congressman Colin Price (Cage) stands up for fishermen and other small businesses whose livelihood has been wrecked by the oil spill, and works hard to get BP to pay damages. Price seems to be a rare politician with ideals, and if Cage appears weary and spent, he uses that exhaustion to convey the sense that he’s a tireless public advocate, a contemporary version of the hero of Mr. Smith Goes to Washington who happens to have a pyramid waiting for his corpse in the middle of the city.

Price’s wife Deborah (Connie Nielsen) supports his political career, but unfortunately the congressman’s passions stray from his wife and native land to a cheerleading coach with whom he’s sharing more than a pom-pom. Media reaction to his affair cuts short a potential Senate campaign before it can begin, and also damages his ability to work for the people he represents.

It’s politics as usual, but despite getting a decent and reigned-in performance from Cage, writer-director Austin Stark can’t make anything more of it than a Lifetime political melodrama. Cage has starred in worse films, but even the subpar Rage gave the actor a chance to let loose into one of his rabid, scenery-chewing episodes. Unfortunately, Stark treats Cage like an unpredictable politician whose volatile sound-bites are tempered by an overenthusiastic handler; his leading man may be tamed, but will he win any votes at the box office?

One of the film’s supporting actors is also returning to the scene of a pivotal role. Peter Fonda plays Cage’s father Rayne (I’m sure it’s meant as weather symbolism), an elderly former mayor of New Orleans. Fonda stopped in New Orleans early in his career during the Mardi Gras scenes in Easy Rider, a movie summed up by the quintessential ‘60s vision of the dying American dream: “We blew it.” Unfortunately, that describes the aging actor’s performance, and this movie. There’s a serious lack of imagination in The Runner, and it’s right there in the film’s pedestrian title, taken not just from a political campaign but from the fact that Price actually occasionally goes running. There’s no need to run away from this underachieving movie; if you walk away from it at a normal pace, it will never catch up with you.