“What is a film director? Someone who’s asked questions about everything. Sometimes he knows the answers.”

That’s the question posed and answered by the fictional director named Ferrand early on in François Truffaut’s Day for Night. Played by the storied filmmaker himself, Ferrand is presiding over a project dubbed “Meet Pamela,” a seemingly simple drama about the unique romantic entanglements of one family. Even with little that seems especially daunting on the surface of it, Truffaut uses the film to depict the delicacy of the collaborative creative process. Everything from melodramatic personal strife endured (and instigated) by the various artisans toiling on the film to the unpredictable whims of a finicky feline actor serve to create barriers towards turning an idea into a work of art.

Given Truffaut’s background as a scholar and sharp evaluator of the art of cinema, it’s somewhat surprising that it took him as long as it did to make a movie about the act of making a movie. Certainly a meta-awareness of the conceits of film shows up in earlier features, and there’s a vein of deconstructionist mischief that throbs throughout his work. A person could generate a pretty enjoyable thesis around the assertion that all of Truffaut’s movies are about, first and foremost, movies.

Day for Night is different, and not just because it brings those subtextual themes to the forefront. Truffaut’s tendency towards autobiography bounds to the forefront through the film’s central casting conceit. In choosing himself to play the perpetually beset director, Truffaut invites scrutiny over all the ways he and his fictional counterpart might overlap. Furthermore, the film stirs fierce curiosity over what Truffaut is trying to say about the state of his own art in making this movie. One of the most devilish aspects of the film is its resolute refusal to dignify that curiosity with a clear answer. It provides the itch and then expresses pure disinterest in doing any scratching. 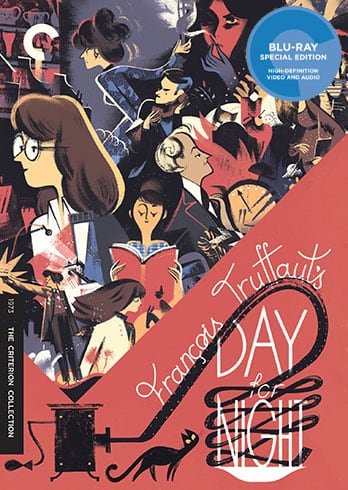 Indeed, Ferrand can be seen as the main character of Day for Night, but he’s also something of a cipher. He spends most of his time reacting to everyone around him, helplessly subject to the unpredictable challenges that arise. He can only ride the waves; controlling the currents is outside of his control. Truffaut plays the role with a slightly frayed patience and a subtle, lurking narcissism. The director is fairly soft-spoken, and yet each problem endured by his fellow creators is defined by how it will impact the film, how it will impinge upon the director’s work. It’s no small matter that an admiring appraisal of Ferrand’s gift for improvisational problem solving is the surest way to make him turn his mind to solutions rather than self-serving laments.

Truffaut’s characteristic attention to detail highlights the movie set as the most fragile of ecosystems. It feels fully self-contained, a world unto itself. Outsiders are doomed to be befuddled as the members of the moviemaking family interact with emotional shorthand. There’s a blissful knowingness at play as the transitory dynamics between individuals make their restless moves. Everyone knows everyone else’s business and no twist, no matter how unlikely, is entirely unexpected. There’s a sense that it can all crumble at any moment. Perhaps the uncertainty of famed British actress Julie Baker (Jacqueline Bisset) will push her to a relapse of a recent nervous breakdown or the aging diva Séverine (Valentina Cortese) will grind the filming process to a halt with her besotted inability to get through a scene. Maybe the addled, driven passions of the young actor Alphonse (Jean-Pierre Léaud) will cause insurmountable distraction. It all must be handled with great finesse. Even then, successfully addressing all these issues requires a certain amount of good fortune.

Truffaut wasn’t coming off especially successful or well-regarded features when he made Day for Night, suggesting that the work can be read as a rueful acknowledgment of the extraordinary difficulties involved in transforming a production’s amazing number of moving pieces into a satisfying finished film. As a strong and early advocate of auteur theory, Truffaut argued for the primacy of the director’s voice in shaping a film. With Day for Night, an opposing viewpoint is slyly presented. In depicting all the turmoil a director must face to get from the first shot to the wrap party, Truffaut allows for the fallibility of the earlier theory now that he’s personally put it to the test many times over. Is a director’s voice truly the most formidable in a film? The new answer to that question is “sometimes.”

[xrr rating=2.25/5]At the time of the release of his debut feature, In the Company of Men,…