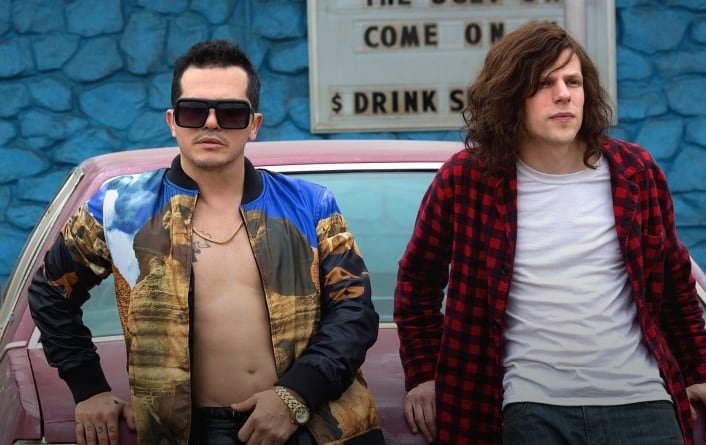 American Ultra calls to mind many other, better movies.

They say that everybody’s favorite word is their own name. Hollywood seems to believe that cliché extends to our nationality as well. Hardly a year goes by without an American Something. Snipers, hustles, gangsters, horror stories, idols, psychos, pies, beauty—they all gain instant swagger and marketing appeal with a big fat “American” slapped in front of them. The summer of 2015 brings us American Ultra, a stoner action-comedy that sounds like an energy drink and does its best to induce a comparable level of synthetic adrenaline rush.

Spineless burnout Mike (Jesse Eisenberg) has a problem leaving his little backwater town of Liman, West Virginia. Hoping to set off for Oahu to propose to his longtime girlfriend, Phoebe (Kristen Stewart), in the most romantic way he can imagine, Mike instead spends the flight’s last boarding call cradling an airport toilet bowl. He’s stricken by vicious panic attacks whenever he tries to leave his small town. Once again, the couple heads home with a sniveling Mike apologizing to his disappointed girlfriend. Despite her boyfriend’s psychosomatic hang-ups, Phoebe seems endlessly supportive of Mike. She’s genuinely thrilled to hear the latest exploits of the Apollo Ape character he’s created, even though he won’t gather together his detailed sketches and elaborate storylines into an actual comic book. She’s supportive of him even when he can’t seem to fry an egg without starting a fire, and she encourages him even when (after partaking of the copious weed the two consume) he waxes philosophical about how he’s holding her back.

But just because you’re paranoid doesn’t mean they aren’t out to get you. Behind the scenes, an insufferable CIA hotshot named Yates (Topher Grace) is coordinating Mike’s assassination. Though his memory has been wiped, Mike’s actually one of the last vestiges of a secret government operation to program troubled citizens into elite government killers. The program went awry and Mike was stashed away in a Podunk town, but now Yates has decided to eliminate him entirely. Thanks to the intervention of a rogue agent (Connie Britton), Mike’s killer instinct is reactivated. Soon he’s downing an attacker with a soup spoon to the neck and using convenience store items to slice and dice his way through a bevy of CIA assassins, all while finding a way to escape the onslaught with his beloved Phoebe.

American Ultra calls to mind many other, better movies. There’s the Pineapple Express stoner action-comedy angle, the Kick-Ass everyman-turned-gore-splattering-hero element, even hints of Scott Pilgrim vs. the World (and not only because Jesse Eisenberg and Michael Cera are basically the same person). The gore is vicious but pleasantly cartoonish, though the action sequences suffer from the fact that Mike never really seems that incredibly skilled; his supposedly elite enemies simply can’t dodge briskly swung hammers, kitchen knives or dustpans. Rather than throw in elaborately choreographed, if unlikely, hand-to-hand combat scenes (think Melissa McCarthy in Spy), director Nima Nourizadeh too often resorts to literal fireworks or cheesy slow-mo bullet shots.

American Ultra admirably plays up the latter half of its action-comedy tag, but it largely peddles chuckles rather than belly laughs. The script (from Chronicle screenwriter Max Landis) plays it safe far too often, never fully delving into subversive comedy or outright farce, and tacks on some too-earnest sentimentality. Eisenberg and Stewart have the believability of actors who have shared the screen together before, but the romance angle bogs down the film more than adds dimension. Grace excels at playing a powerful, bloodthirsty douchebag, but Britton’s agent-with-a-conscience is less convincing. With a grade-A cast that also includes the likes of John Leguizamo, Bill Pullman and Tony Hale, American Ultra should’ve knocked it out of the park as a bloody, over-the-top romp. Snappier dialogue, a hint of parody or social commentary and starker editing could’ve easily made this somewhat entertaining popcorn film into a very good one. Instead, American Ultra lands glancing blows when it should be jamming a soup spoon right in the jugular.