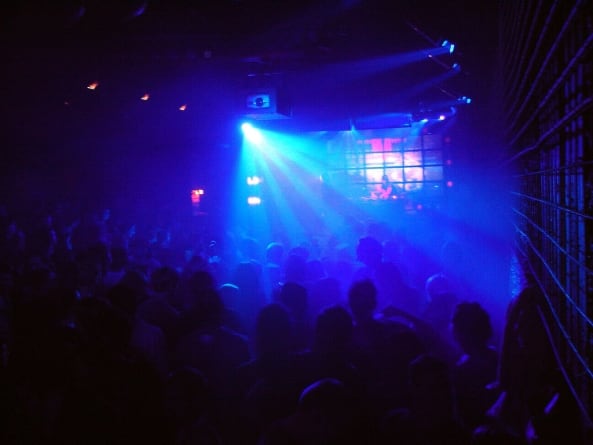 The robotic timbres of electronica often evoke space travel and futuristic worlds. This vignette from the Scottish duo’s 1998 debut album Music Has the Right to Children offers the lighter side of that future, its beats supporting an almost ethereal 8-bit idyll. These are all the colors of the spectrum, the title tells us, and with lyrics that don’t go beyond “Hey,” the music celebrates all the colors of the future, now.

Bald electronic visionary Richard Melville Hall had the foresight to license each of the tracks on his 1999 album Play for commercial use. This meant that, at the time, you couldn’t cross the street without hearing something from Moby’s blockbuster. But if success turned the album into a cultural juggernaut, it was also programmed with this gorgeous moment of relative introspection, however carefully licensed.

Richard D. James was all of 17 years old when adapted the name Aphex Twin in 1991 and released the first in a series of EPs he called Analogue Bubblebath. James took the hard beats of acid house and doused them with an ambient atmosphere that developed into one of the defining sounds of the decade’s electronic music.

Influenced by the harsh industrial sounds of Throbbing Gristle and Einstürzende Neubauten, this Finnish electronic group made music out of the kind of glitches that most synth wizards would consider mistakes. But their abstractions did not necessarily leave the D out of IDM. This track from their 1999 album A lays danceable if jerky beats under their signature experimental din.

Trip-hop reached the apex of its chill-out potential when Massive Attack paired up with dub king Mad Professor to retool their laid-back second LP. All of No Protection is essential for anyone looking for an accessible entry point into the deeply connected history of Jamaican dub and U.K. electronic, but a particular highlight is the re-edit of “Weather Storm.” Stripped down to an elegant, reverbed piano passage chopped and screwed around widely spaced drums and connected by a rickety bridge of toms, the song is punctuated by hissing scrapes that undercut the elegance with a hint of menace truer to the chaotic weather pattern that gives the track its new name.

While other electronic musicians built beats on ‘70s disco, Moby went back further – much further. The limited singer wisely let his samples do the honors for most of Play, and the soulful vocal by the Shining Light Gospel Choir takes this lamentation farther than an electronica nerd ever could have on his own. But Moby wasn’t just dancing on the shoulders of giants; this track’s soaring arrangement and plangent melodic lines helped redefine sampling as a true form of collaboration.

They tapped Chic long before they collaborated with Nile Rodgers, using a synth for the role of Bernard Edwards’ bass. And in the grand tradition of Silver Convention, the only lyrics in this number one single are its title. Daft Punk was years away from winning a Grammy, but on their 1997 debut album Homework, the French duo established a simple template that would make people dance around the world.

U2 rode their irony-laced first comeback straight into the ground with the too-calculated Pop, but heard today, the album reveals many unjustly forgotten gems. Chief among them is this number, which took the band’s flirtations with Eurodance to the extreme, as well as their penchant for hiding confessional malaise beneath a detached and superficial sheen. Over heavily treated electronic screams and trance drum patterns, Bono confesses a sense of fragility tied to the loss of his mother at a young age, reminding everyone that the dated U2 of the ‘90s may have been the best iteration of the band for fusing their cloying sincerity with enough remove to make compellingly honest.

Not to be confused with the group’s instrumental track by the same name, this 1996 single gained traction from its inclusion on the soundtrack to Danny Boyle’s film Trainspotting, and its furious beat suggests the racing heart and obsession of the addict. Underworld vocalist Karl Hyde was struggling with alcoholism at the time, and this struggle inspired his music, but Hyde was horrified when the refrain “lager lager lager” turned his struggle into a drinking song. Hyde told The Guardian that the title came from “a greyhound we won money on,” and this hip-shaking dog keeps making them money today.

The relentless beats of Chicago house take on a punk rock violence on this 1991 track originally released on the Dance Mania label. Producer/DJ Armani was reportedly about to join the police force before he turned to music, and a frenetic sense of emergency pulses throughout this dance floor anthem. Somebody call the authorities; these sick electronic timbres are a rhythmic assault you won’t be able to shake.

Europe and the U.K. may have definitively outpaced the United States as the chief locations for adventurous EDM in the ‘90s, but Detroit electro duo Drexciya managed to keep techno’s hometown pride with a series of tracks that blended the speculative futurism and strident politics of the city’s best dance music. “Andreaen Sand Dunes,” off their 1998 masterpiece Neptune’s Lair, is perhaps their single greatest number, one of many wordless bits of fantastical cartography in its sketch of the underwater metropolis that the duo created entirely through synthesizers. Sunrise drones cast a reflection on the choppy surf of squelching synths, while occasional bubbles of aqueous bass rise to the surface like air bubbles escaping from the depths. It is at once a blissful dance track and a testament to the capacity of wordless, floor-oriented music to communicate powerful specificity, wielding beats like sonar pings to trace the contours of an entire microcosm.

The quintessential jungle theme, “Terminator” put dnb maestro Goldie on the map with a track that epitomized the experimental nature of the genre’s halcyon days. Jittery synth lines give way to clacking snares and whumping bass that occasionally rises in both volume and pitch as the energy builds, only for the composition to collapse entirely and be reborn as something different before eventually settling on a monstrous hybrid of the two arrangements. In execution, it becomes something akin to dance music’s answer to Rush’s “The Spirit of Radio,” an unabashed demonstration of musical skill compressed into the knottiest (yet still exhilarating) pop imaginable.