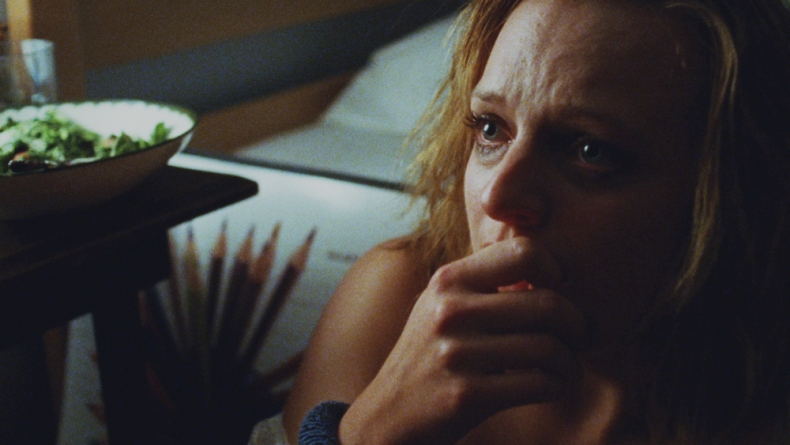 Queen of Earth removes any doubt that Perry is a major American filmmaker, and showcases two of the best, most exciting female actors of today.

Alex Ross Perry’s third film, Listen Up Philip, catapulted the young filmmaker to the upper echelon of independent film makers. Although it’s still early in his career, The Museum of the Moving Image recently programmed a retrospective of his films in anticipation of his newest opus. Philip was a strong effort, featuring a searing performance by Jason Schwartzman—probably his best to date—as well as a deeply-felt one by Elisabeth Moss, a phenomenal, accomplished actor whose best work is still ahead of her. But his previous film The Color Wheel, while better than similar efforts by, say, the Duplass brothers, feels slight in comparison, and the reverence surrounding Perry seems a bit premature. Queen of Earth, however, removes any doubt that Perry is a major American filmmaker, and showcases two of the best, most exciting female actors of today.

Drawing on Roman Polanski’s claustrophobic psychological thrillers, Perry creates a tense atmosphere right from the first shot that only increases as the film continues. Often we think of vain actors primping for their close-ups, but Moss is fearless in her portrayal of a woman’s mental unraveling in the wake of tragedy, appearing first with makeup-streaked cheeks and a runny, clown-red nose. She plays Catherine, who worked as an apprentice to her famous artist father until his sudden death—an event obliquely referred to as “the accident.” After her boyfriend dumps her, she escapes her tattered life for a while with her best friend Ginny (Katherine Waterston), whose aunt and uncle own a lavish home in the country. Except for the opening scene, this is where the entire film is set, though the narrative interweaves flashbacks to the previous summer, when the women stayed in the country home along with Catherine’s then-boyfriend.

Perry’s characters are often cruel to one another, and this film features some of the most lacerating exchanges he’s ever devised. The nuance and complexity of these two characters’ friendship, though, is remarkable, especially for a film this brief. Flashbacks provide a glimpse into the roots of their underlying hostility—jealousy, resentment, irritation—and function as exposition and as counterpoint to scenes in the present.

But this is also a deeply enigmatic film—one that benefits from a second viewing. The ethereal score, which ranges from Ligeti-like dissonance to a simplicity reminiscent of John Carpenter, hints at something dark early on, and Catherine’s gradual mental degradation is a terrifying spectacle. However, while the film seems to be a Polanski riff with its taut psychological arc and undeviating setting, it reveals itself by the end to be a closer relative to Ingmar Bergman work like Persona. Both directors’ masterpieces include what are essentially chamber dramas, but Bergman, like Perry, focuses more on relationships, where Polanski’s films are often about people losing their minds in isolation. In Queen of Earth, Catherine is matched in complexity by Ginny, whose relationship with an obnoxious neighbor named Rich (Patrick Fugit) is a constant source of tension. Rich’s presence in the house is partially a passive-aggressive move on Ginny’s part, especially once she becomes aware of his inability to get along with Catherine. Her seeming obliviousness to her friend’s increasing fragility opens up a dark side of her character that intriguingly is never fully accounted for.

Throughout the film, Catherine works on drawing a portrait of Ginny, which allows her to exercise a measure of control over her friend, demanding that she remain perfectly still. In addition to functioning as a metaphor for the friendship, these scenes in particular highlight Perry’s visual sense, which is much more refined here than in his earlier films, which featured the kind of jerky handheld camerawork common to many independent films. Here, he and cinematographer Sean Price Williams pay much closer attention to framing, especially in close-ups of Moss where her easel obscures part of her face. Unlike Perry’s earlier work, Queen of Earth’s formalist elements are as strong as the central performances, which are still the real focus. In a way, the genre elements are a red herring, as the film doesn’t end up quite where the viewer expects it to. What ultimately outlasts the roll of credits is the incredible commitment of the two lead actors. If Perry didn’t have any other virtues as a filmmaker—and without question, he does—his films would still have tremendous value as actor showcases. Moss and Waterston are destined to be the most in-demand actresses of their generation, and Perry has captured them in top form.