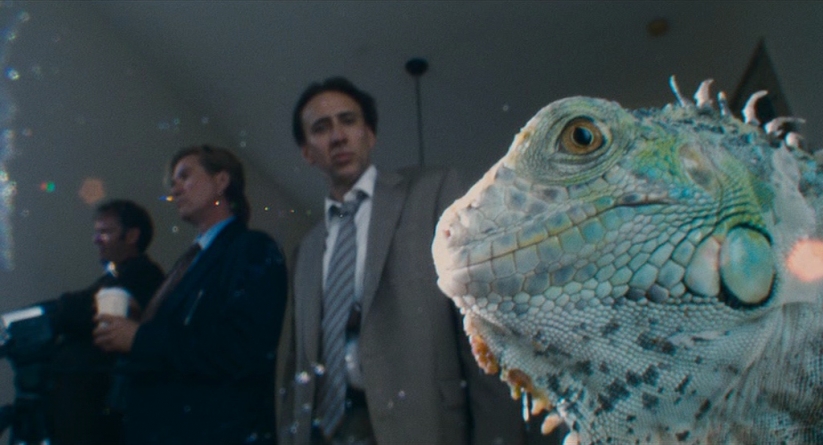 Politics has never been Werner Herzog’s forte. With the exception of Into the Abyss, his study on the death penalty, his most explicitly political documentaries have largely centered on the destruction of the natural world. Even those films, however, defuse any direct sloganeering by adopting oddly detached, alien-like perspectives. As such, the text crawl that announces the opening of Bad Lieutenant: Port of Call New Orleans is set during Hurricane Katrina’s landfall. It comes as a surprise, lending a political tint to the permanent injuries NOPD Lieutenant Terence McDonagh (Nicolas Cage) sustains in the rescue of a suspect from a flooded jail cell. Though Terence does not seem entirely altruistic and noble—he complains of ruining his suspiciously expensive underpants by diving to save a drowning man—there is nonetheless a marked difference between the dutiful cop glimpsed in the first moments and the law-flouting, drug-swindling maniac produced in the storm’s aftermath.

Then again, the state of American domestic politics may matter less to Herzog than Katrina’s demonstration of a man-made failure to protect against natural wrath. The first image of the film, after all, is a snake skimming the water of a flooded jail cell, oblivious to the bars that trap the detainee. It behaves as if this were the creature’s ordinary domain. Reptiles recur throughout as symbols of a primal urgency and violence, from the iguanas that dot the film’s most infamously bizarre scene to a car crash that juxtaposes a run-over alligator with a flipped car, an unintended battle between man and nature that ends in stalemate.

Matching the actual reptiles is Cage’s cold-blooded performance: volcanic when riled up but lethargic and slow-thinking when the cocktail of painkillers, hash and powders wear off. At first blush, Cage is an obvious ringer for Klaus Kinski: they share the same high, sloping forehead, and the same penchant for sudden and terrifying lurches into uncontrollable temper. Even their hair is the same, not in color or texture but in their shared propensity for betraying their owners’ true state of constant rage. If nothing else, Herzog’s film is one of the more direct demonstrations that Cage’s acting, often mocked for its arbitrary emotional lunges, strange diction and unfashionably breakneck energy, has precedents and should be considered on its own terms.

Taking Kinski as an inspiration for his work, the actor has rarely been so unpredictable, lacing each scene with a torrent of wild exploitation and corrosive guilt that makes Terence hard to peg. Where Harvey Keitel’s own bad lieutenant was the embodiment of Catholic guilt and irreconcilable spiritual/secular divides, Terence is held captive to a more diffuse code of conduct that incorporates both law enforcement ethics and an elemental battle for the primacy of the human soul. Though William Finkelstein puts Terence in many of the same scenarios from the original film, Cage reacts to each moment by splitting focus between a total Dionysian immersion into drugs and sex, and a measured, reflective consideration of both his own life and those of the people close to him. In the presence of drugs, Cage puts a reptilian slink into his movements, and his whole body writhes with anticipation of his next hit. Around people like his recovering father (Tom Bower) and alcoholic stepmother (Jennifer Coolidge), Terence betrays his better self, soothing their frayed nerves and treating each with an empathy and compassion he wishes he could extend to himself.

Herzog films Cage the way he films the strangest, most dangerous and unknowable elements of nature. He and cinematographer Peter Zeitlinger use the same Steadicam techniques they employ to equally great effect in the same year’s Encounters at the End of the World. They are forever gliding after Cage as if studying some strange, fragile landmark in the process of being eroded by a world corrupted by man. The film nominally hues toward fashionable blue/teal color timing, but subtle tweaks shift toward the blue and red colors of police lights, as if Terence’s suppressed dedication to the force is forever bearing down on him. That small aesthetic indication is as poignant as the occasions where Terence is shown to care more about suspects than most of his peers, stopping his partner (Val Kilmer) from grilling a drug addict and correctly pointing out that publicly bringing in low-level users to try and take out a local supplier will only get those people killed. These fleeting glimpses of Terence’s convictions are more rewarding than the stilted machinations of the script, which pits Terence against drug kingpin Big Fate (Alvin “Xzibit” Joiner) in a convoluted game of entrapment that would accomplish nothing more than getting a few million dollars sued out of the New Orleans Police Department.

The tranquility of the camera movement forms a contrapuntal relationship with Cage’s performance, often floating idyllically during his most explosive outbursts but also setting up the occasional grace notes that reveal some of Cage’s, and Herzog’s, most delicate touches in years. One comes when Terence surveys the massacre of Senegalese drug makers and finds a short poem in simple English dedicated to one of the poor men’s pet fish, which Terence ruminatively holds up in the small cup that is its universe. Later, Terence takes his girlfriend, Frankie (Eva Mendes) to his dad’s house and shows her the shed where he used to hide away. In a two-shot of the pair looking outside, Terence relates a story of finding a coin with a metal detector that briefly halts the film for a beautiful respite. Neither Cage nor Herzog has more than a few, if any, other moments like it in their respective careers, and more than the chance to see the German director encroach upon American genre film, such scenes make Bad Lieutenant one of Herzog’s most memorable movies.