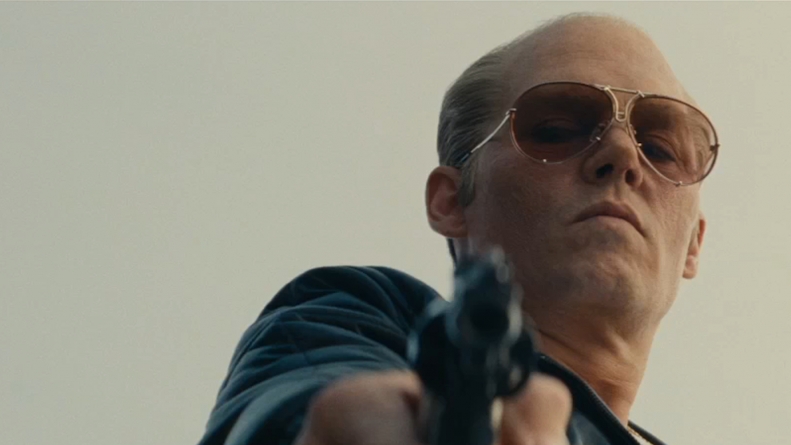 This has been a year of contrast for Johnny Depp. The megastar whose name has become virtually synonymous with hours spent in the makeup chair used little more than mustache wax for his ill-advised romp in January’s Mortdecai. That career nadir (The Lone Ranger notwithstanding) featured plenty of Depp’s trademark quirk, and he chewed the scenery so hard it’s little wonder that he’d next appear onscreen as a character sporting a dead tooth. Yet, his return to drastic physical alteration in Black Mass couldn’t be in starker contrast to the fantastical roles for which he’s become known—for 122 minutes, Depp chillingly embodies the unholy ruthlessness of notorious Irish-American mobster James “Whitey” Bulger.

With piercing, wolf-blue eyes, pasty skin and snatches of hair slicked back against a balding pate, Depp commands the screen in a manner befitting the role of the mob kingpin who for two decades gripped Boston’s underbelly—and even the FBI—by the balls. Black Mass revolves around Depp’s striking performance, structuring the bullet-pointed true events of the film as mere backdrops for a star whose turn as a notorious villain is clearly meant to remind us that Depp can be a deathly serious actor when he so chooses.

Then again, Depp’s no stranger to true-crime movies either, starring as Dillinger in Public Enemies and turning in a heralded lead-role performance in Donnie Brasco’s own tale of FBI and mafia entanglement. In Black Mass, he’s an apex predator who relishes the opportunity to devour other alpha males. The film hits on many of the blood-soaked mile-markers of Bulger’s infamous criminal career, focusing largely on the “alliance” he formed with FBI agent (and childhood friend) John Connolly (Joel Edgerton), who in effect used the bureau to shield Whitey and allowed his murderous racketeering free rein. In turn, Whitey would act as an informant against his crime-syndicate enemies, namely the Angiulo mafia family that controlled North Boston.

Despite the lurid subject matter, there’s often an odd lack of tension in many gangster films. After all, we know most of the characters are going to end up unceremoniously whacked or imprisoned. Whenever we sense a character is in peril, he usually is, and unexpected shots to the head are par for the course. Much like The Departed, there are abrupt execution-style shootings aplenty in Black Mass, especially early on. Whitey, his right-hand man (Rory Cochrane) and his enforcer (W. Earl Brown) often strike in broad daylight—even though Whitey is later savagely put off by being handed a duffel bag of cash at a nightclub.

Black Mass is packed with notable faces spitting out Boston accents. Benedict Cumberbatch stars as William Bulger, a state senator whose influence certainly doesn’t hurt his nefarious older brother, even though he’s wise enough to keep his own nose clean. Adam Scott and Kevin Bacon turn up as profanity-slinging, ball-busting FBI suits. Peter Sarsgaard plays a would-be hitman cokehead. Dakota Johnson even makes an appearance. But even when Bulger is not on screen, Black Mass is clearly Depp’s show. Director Scott Cooper uses dimly-lit sets to emphasize the grit of his grim subject matter, with every crow’s foot or jowl almost popping from these roughneck’s faces. Cooper may cast too wide a net (spanning two decades in two hours) and, despite some family scenes that include Whitey playing gin with his elderly mother and giving awful schoolyard advice to his young son, we don’t get much room for character development amongst all the swagger and stylish bloodshed. There’s certainly no shortage of slick editing, though. (A segue from the blinking strobes of a Miami dance club to a crime scene photographer’s flashbulbs is particularly masterful.)

Before he spent over a decade on the lam and was finally captured and locked away for two life sentences, Bulger was once the kind of gangster who would shake a guy’s hand while his crony raised a gun to the back of the guy’s head. Depp’s portrayal involves even more brutal murders, such as strangling a prostitute and seethingly cinching a noose around the neck of an associate who talked too much. For as swift as he was to snuff out the slightest whiff of a rat, Bulger’s own history as an informant came as a surprise to many. As Joe Berlinger’s Whitey documentary recently pointed out, the crime boss doesn’t mind being perceived as a murderer, but a desire to preserve his warped legacy means he still won’t cop to ever being a rat.

While it’s easy to take issue with mobster movies like Goodfellas for their glorification of psychopathic machismo, that doesn’t factor in as much here. Sure, Bulger’s crimes provide the gruesome subject matter, but this film is far more about Depp’s uncanny talent than about the real-life mobster. Depp’s Whitey is not glorified so much as he is cast as a vile, untouchable specter whose manipulation of the FBI allowed his dark reign in the streets of Boston to stretch on far too long. Depp may soon be returning to the whimsical madness of Alice and Pirates sequels, but for one darkly glistening film, he’s proven as adept at portraying outright depravity.