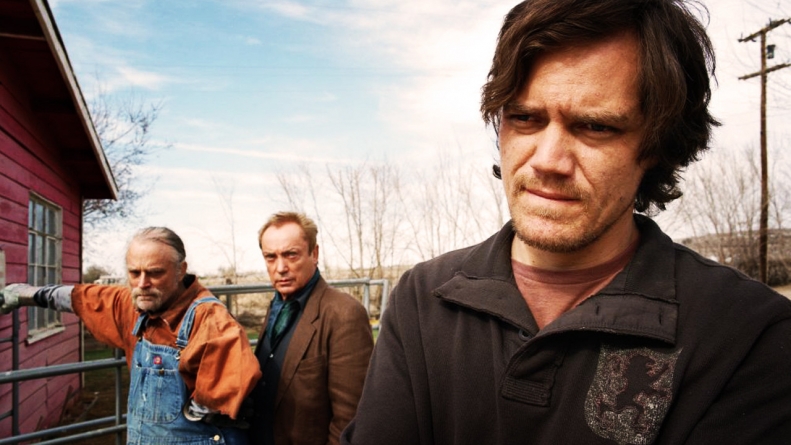 My Son, My Son, What Have Ye Done lacks the transcendent beauty that marks Herzog’s best work.

It sounds great on paper: My Son, My Son, What Have Ye Done, a film by Werner Herzog, produced by David Lynch, starring Michael Shannon and Willem Dafoe. The result? It comes as no surprise that the film is utterly confounding. Despite the superficial genre trappings—much of the film consists of an extended hostage situation in a residential neighborhood—it would be a mistake to expect anything conventional from Herzog. I’d like to say that despite being fascinatingly idiosyncratic, the film isn’t totally successful—but that would require an understanding of Herzog’s intentions, which are more inscrutable than ever.

The screenplay, begun by Herbert Golder in the mid-‘90s, takes inspiration from real-life murderer Mark Yavorsky. There are a few broad similarities between what happens in the film and the true story, and some of Yavorsky’s testimony made it into the film verbatim, but much of the film is a fabrication. Shannon plays Brad McCullam, a deeply odd young man living with his mother (Grace Zabriskie) and engaged to Ingrid (Chloë Sevigny). Brad recently returned from a trip to Peru in even stranger shape than before; his travel companions drowned while rafting after ignoring his ominous premonition of disaster. The film begins just after Brad has murdered his mother in a neighbor’s home. Detective Hank Havenhurst (Dafoe) arrives on the scene but misses an opportunity to arrest Brad, not realizing he’s the suspect. Brad manages to get back inside his home (with, he claims, two hostages) and a standoff ensues.

Through flashbacks that stem from Detective Havenhurst’s interviews with Ingrid and a theater director (Udo Kier), Brad’s history is gradually filled in. However, Herzog oddly shows little interest in delving into Brad’s deranged psyche. The film feels more like a sideshow, full of bizarre behavior and nonsensical dialogue. Brad keeps flamingoes as pets, worships the man on the oatmeal box and, in a flashback late in the film, shows up at a naval hospital demanding to “help the sick in general.” None of this is particularly revealing, but Herzog seems satisfied to exploit the darkly comic potential of his unhinged leading man. Shannon, as always, is fully committed to his role, but he often seems to be simply doing what Herzog tells him without understanding why.

Beyond this, he’s surrounded by characters in whom Herzog shows almost no interest at all. Sevigny, in a typically wooden performance—though perhaps that’s intentional here?—comes across as completely blank. How she, a by all appearances normal young woman, came to meet Brad and how she managed to stay with him in spite of his antisocial, disturbing behavior are questions that are never explored. As for Dafoe’s detective, he barely registers as a character, showing no particular motivation beyond the call of duty. It’s incredible how the film shifts from carnivalesque absurdity to utter blandness.

But again, maybe that’s all part of the lunatic director’s master plan. With The Bad Lieutenant: Port of Call New Orleans, Herzog proved himself of slyly subverting expectations, taking the police procedural and pulpy bad-cop archetypes to a hilarious extreme. Herzog is skilled when it comes to working with actors, so he must have been aware of how stiff much of the dialogue sounds in My Son, My Son; the really difficult thing to figure out is what he’s after with this film. His approach just feels all wrong for a story like this, which begs for more psychological investigation. Perhaps he wants to say something about the inscrutability of madness; perhaps it is very much by design that we can never get inside Brad’s head. But what we get instead just isn’t sufficient. It’s occasionally striking, yet it lacks the transcendent beauty that marks Herzog’s best work.