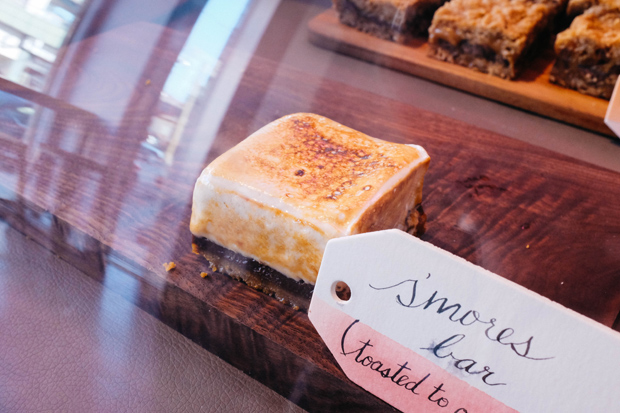 To Cindy Coelho, childhood treats are more than the mundane Pop-Tarts and Flakie from the supermarket. “When we were kids, Pop-Tarts tasted really good,” said Cindy. “But if I pick up a Pop-Tart from the supermarket right now, it tastes pretty much like cardboard to me. There’s no flavor to it, but as a kid it was the best thing ever.” Inspired by this childhood longing, Cindy and her sister Sarah experiment with a large assortment of baked goods at their downtown Toronto store, Bake Shoppe.

Bake Shoppe hasn’t always been a bakery café. That came about when Cindy and Sarah envisioned their original business, the Wedding Cake Shoppe, to be something sweeter and bigger. “The Wedding Cake Shoppe has been around for 10 years,” said Cindy. “When we first got this space, we only had the wedding cakes and cupcakes for sale. We decided to expand our menu, that’s why we rebranded the shop, as we want to bring in people for the actual sweets.”

I discovered Bake Shoppe when I happened upon their Instagram feed. I’ve been following them religiously since then and it’s simply too hard to take my eyes away from their confections. Ruffles Square is currently one of their hottest treats on the menu, an ode to the good old Rice Krispies Treats, but in place of the cereal, Bake Shoppe substitutes Ruffles chips instead. Bourbon S’mores bar is the piece that gets the most rave reviews. In this confection, the marshmallow is coated with a lush brush of bourbon, bringing the campfire staple to another level. It’s perfect for those who enjoy a richly-flavored sweet with a boozy touch. But nothing truly compares to their game-changing homemade pop-tarts, which are filled between the finely layered crusts with artisanal jams from the local Kitten and the Bear tasting shop.

While the sweets are immensely popular, wedding cakes are still very much the core of Bake Shoppe identity (their hand-painted Van Gogh-inspired cake just made my jaw drop). Lots of the wedding cake designs at Bake Shoppe take hours of time to make, and not everyone realizes the hard work put into it. “Some of our cakes tend to be a little more labor intensive,” Cindy said. “Sometimes the simple design isn’t that simple at all.” While Bake Shoppe’s cake designs lean toward the modern spectrum, they also use old school techniques such as Lambeth, which involves layering icing over the cake repeatedly by hand. “Not many people ask for that kind of design anymore so it’s starting to fade. It’s almost like a lost art”.

Cindy also has big plan in the works for setting up a studio in the basement where clients can come in to see their wedding cakes right in front of them. “The ‘wedding cake meetings’ are going to be a lot more interactive, where we can actually build the clients’ cakes with Styrofoam and have them covered in fondant,” said Cindy. “I’ll be able to show them visually how big each size of the cake is so they can really see what the wedding cake will look like right in front of them.” 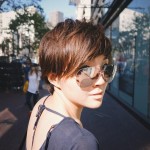 \Ashley is a Hong Kong native who's currently living in Toronto and she dreams about opening her own cafe and bookstore one day. While her mum is an incredible home chef, Ashley enjoys eating more than cooking but has plans to take cooking lessons (soon). You can follow her foodie ventures on her Instagram @heresaheart. She also loves hunting down entrepreneurs and artisanal food makers in the industry, and feature their stories at tastesmith.co.