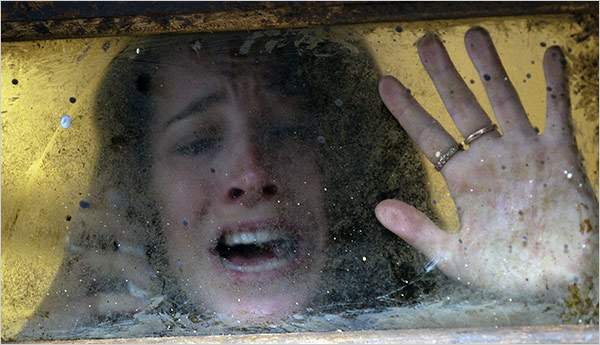 Craven introduces the kind of grace notes that he would use throughout his career.

Two young women are raped, tortured and brutally murdered by escaped killers. The killers by chance visit a house that belongs to the parents of one of the victims, and when the worried mother and father realize that these intruders killed their daughter, they take their bloody revenge. Wes Craven’s first feature launched a long and fruitful career of making audiences squirm and scream in their seats. But he had reportedly seen only one horror movie before making The Last House on the Left. Lucky for us, that one horror movie was Night of the Living Dead.

The film’s lurid plot got it banned, but its source goes back to an art-house classic, and even further back to a Swedish ballad. Ingmar Bergman’s 1960 film The Virgin Spring, based on the medieval Swedish ballad “Tore’s Daughter at Vange,” told a similar story of a young woman brutally murdered, but the difference in the films is clear from their titles. Bergman found room for redemption, as the site of his victim’s death miraculously becomes a fountain, a Virgin Spring that brings hope. Craven’s film takes place in a nihilistic world without hope, whose gentle waters are permanently stained with blood.

This hopelessness comes in a beautiful setting. As the film opens, we see the beauty of nature and of man: the lush woods that surround the house where Mari Collingwood (Sandra Cassel) lives with her parents; and the young woman herself, admiring her freshly developed figure in the mirror. Scenes of innocence and beauty are juxtaposed with shots of the escaped fugitives lazing in their sleazy apartment. The girls leave their idyllic woodland home to go to the big city to see the band Bloodlust. (Contrast this with Bergman’s virgin leaving home to take candles to a church). Mari is 17 years old, and as a young woman of her time she refuses to wear a bra, much to the consternation of her parents. Her parents also don’t want her going out with her friend Phyllis (Lucy Grantham), a rebellious young woman who unwittingly leads the girls to their fate. When Phyllis suggests they score some grass after the concert, they find a likely suspect in Junior (Marc Sheffler), who takes the girls into the killers’ apartment.

The film is violent and seedy, an atmosphere made more effective by the use of unknown actors and a semi-documentary style inspired by the rawness of Night of the Living Dead. But Craven also introduces the kind of grace notes that he would use throughout his career, from animal reaction shots of the Collginwood’s pet pup to tranquil shots of babbling brooks, which may well have influenced the B-roll padding of exploitation director David DeCoteau.

These gentle images set up the horror to come. But Craven pulls his punches in ways that even the film’s fans may find suspect. The director seemed to know that his dark vision would be almost unbearable to watch if he had played it completely straight. So he added comic music and a subplot that seems cheap and corny, but that keeps the film from being utterly despairing. The inept policemen who botch multiple opportunities to prevent the carnage may be excused as symbols of increasingly unreliable authority figures. Less defensible is music that occasionally makes you feel like you’re watching a horror movie directed by Benny Hill.

That goofy soundtrack music was in fact composed by David Hess, the actor who plays the brutal gang leader Krug. It’s a dual role that perhaps suggests his character’s sadism, but this killer’s music has its signifying moments. Incongruous barrelhouse piano briefly turns into what sounds like a quote from Trout Mask Replica as the criminals pack the girls’ bodies into the back of their car. This is the sound of the counterculture’s dark notes, the idyllic hippie dream shattered by the violence of a Charles Manson, the freedom that turns to tragedy.

Craven told John Wooley, author of Wes Craven: The Man and his Nightmares, that after seeing Night of the Living Dead, he thought, “My God, I’m not aware of this art form at all. It’s raucous. It’s bawdy. It’s crazy. It electrified an audience. And it has something to say.” He could have been speaking of The Last House on the Left, and his subsequent career.