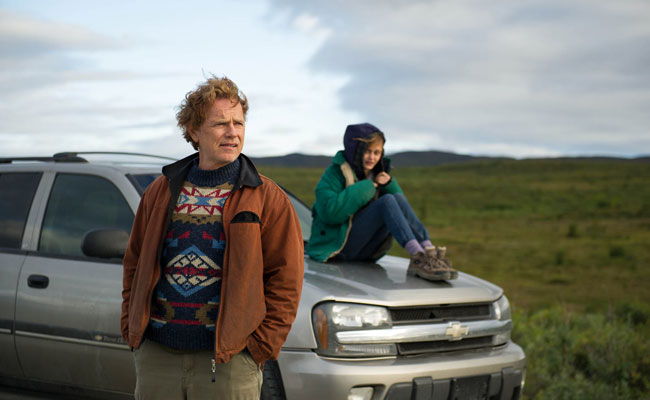 Frank Hall Green has created a hushed and piercing little picture, despite the big red bow he’s tied around it.

Wildlike, the new feature by director Frank Hall Green, is an adventure story of sorts. Our hero, a teenager named Mackenzie (raccoon-eyed Ella Purnell), gets shipped from Seattle to Juneau by her mother, who’s checking herself into rehab. When Mackenzie arrives in Alaska, where she’s to live with the brother of her recently deceased father, the situation soon turns dire. Her unnamed uncle (Brian Geraghty), a blandly menacing creep, wastes no time in stalking his prey. He leers at his niece, offers my-how-you’ve-grown flattery every chance he can get, and skulks outside her room at night. Luckily for Mackenzie, he also buys her a smartphone and a pair of boots, both of which she will soon put to good use.

After a couple of sickening bedroom scenes that we can see coming from about two minutes into the movie, Mackenzie bolts. She wanders the streets of Juneau, finds a random inn and lets herself into an unlocked room. That’s where she’s introduced to Rene Bartlett, a gruff, middle-aged backpacker (the always great Bruce Greenwood). So begins her journey, not back to Seattle but northward into the state’s pristine interior.

What transpires next, and why, isn’t worth recounting with great detail. The screenplay, also written by Green, eschews any semblance of realism or logical flow. (Which isn’t always a bad thing.) For example, no adult Mackenzie meets shows the slightest bit of good judgment, which is great for narrative purposes. After all, a trip to Child Protective Services would have cut the film down to 20 minutes and denied us some lovely character interactions and gorgeous Alaskan panoramas.

Mackenzie and Bartlett end up in Denali National Park, where their adversarial relationship becomes tender and personal. (This is despite a jarring sexual advance, which comes without warning and goes like an afterthought. Green inserts such lurid twists into his story with queasy regularity.) Grief haunts both characters. Mackenzie continues to reel from the death of her father and the separation from her mother. Bartlett’s journey through Alaska is a tribute to his wife, whom he lost to cancer in the past year. (The couple used to vacation in Denali, a tradition which began with their honeymoon.) Sorrow is the one thing the mismatched duo shares, and it becomes their tether.

Purnell and Greenwood’s performances are top flight. Purnell (who played a teenaged Maleficent in the Angelina Jolie blockbuster) resembles a young Taylor Schilling. Her range may be limited, but she has a quiet confidence that keeps Mackenzie from veering into petulance. Greenwood (Captain Pike from the Star Trek reboots) communicates sadness from his weary eyes without dropping a single tear. Too bad they’re both working with material that only sometimes matches their valiant efforts.

Wildlike‘s finest moments are subtle, such as an encounter with a brown bear where the threat of imminent death offers an example of the life’s beauty. Green’s screenplay does right by his leads in a couple of scenes. A conversation between Mackenzie and Bartlett in a tent, where he recounts his tale of loss, is devastating. Later on, a campfire exchange with other travelers (among them the excellent Ann Dowd) approaches lyricism.

Cinematographer Hillary Spera is the film’s obvious MVP, and the great state of Alaska its marquee star (sorry, Ella and Bruce). Her shots of this sun-dappled wilderness are unshowy but breathtaking. Glaciers look like slabs of bluish marzipan. Mountain ranges seem pulled from postcards. Large stretches of desolate roadway recall a pretty post-apocalypse, without the help of CGI.

Wildlike shifts gears in its clumsy and heavy-handed third act. What was once a character-driven affair turns into the approximation of a thriller. Its resolution is so implausible that previous truths, in retrospect, start to ring hollow. But Wildlike withstands these tidy plot contrivances. Frank Hall Green has created a hushed and piercing little picture, despite the big red bow he’s tied around it.