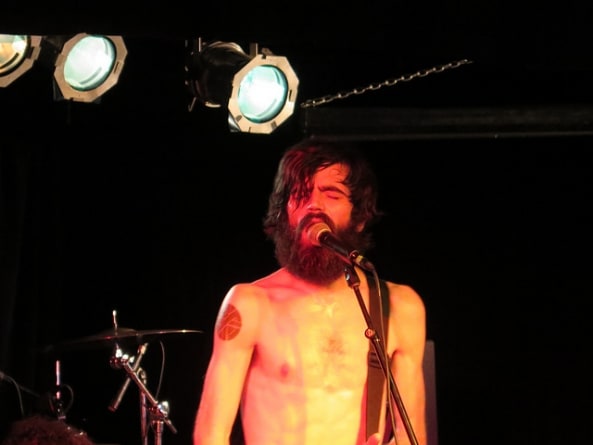 Stickles and the rest of Titus Andronicus made the late night worthwhile.

October 1st came and went like any other day. But the folks who owned marijuana dispensaries, the day rang true with the sounds of happy cash registers as people lined up to buy legal, recreational pot on the first day possible in Oregon. It was calculated that Oregonians bought nearly $11 million of weed that first week. It was high times in Portland.

Leave it to Patrick Stickles of Titus Andronicus to harsh our mellow. Midway through the band’s excellent, 2-hour plus, 22 song marathon show, Stickles extolled the virtues and strangeness of smoking legal weed, but then presented us in the audience the sobering reality of such an achievement.

Pretty soon we would be smoking the “Natty Ice” of weed, the bearded frontman reasoned. It was only a matter of time before some corporation swooped and began selling an inferior, but cheaper product, putting all the mom-and-pop growers out of business. That making weed legal took some of the fun out of it now that the sense of danger is gone. To prove his point, the band did a ramshackle cover of “Rainy Day Women #12 & 35” towards the end of the first set.

Smoking pot would have helped with what seemed like an interminable wait for the band to come on. The sold-out crowd strained and pushed as Stickles and the rest of the group set up. A two-hour set starting past 11pm is asking a lot, but with two openers on the bill, everyone needed ample time to play.

To be honest, I had given up on the band after 2012’s Local Business, finding it inert after the rousing first two records. This year’s The Most Lamentable Tragedy might be a big, 90 minute mess, but it’s also easily one of my favorites of the year with songs that run the gamut from punk to a Pogues cover. The band not only grew as recording artists, but as performers as this was the easily the best show of theirs I’ve seen since they began touring on The Airing of Grievances.

I wondered if the band would just do the new record straight through, considering it’s a rock opera/concept album/whatever you want to call it. But beginning the show with “Upon Viewing Brueghel’s ‘Landscape with the Fall of Icarus,” a cut from Grievances,, a straight reading was not meant to be. Instead, Titus Andronicus played songs from all four records, as well as a trifecta of covers that ranged from the aforementioned Dylan track to an encore that consisted of “Walk On” (Neil Young) and “I Saw Her Standing There.”

Titus Andronicus also incited a mosh pit, something that rarely happens with timid Portland concertgoers and even less so at a 21 and over show. New songs such as “Fatal Flaw,” “Mr. E. Mann” and set closer “Dimed Out” got the crowd going while older tracks such as “Fear and Loathing in Mahwah, NJ” and “A More Perfect Union” pleased longtime fans in the crowd. Even at 1am, the club’s floor seemed crowded, if somewhat exhausted. But Stickles and the rest of Titus Andronicus made the late night worthwhile.