Well, it’s 10/13 and that date holds a mighty special meaning for X-Philes (if you have to ask why, you’re not one of them, so why read this?). Thus, it seemed infinitely appropriate for this round of Revisit/Rediscover to focus on The X-Files or, at least, one of the more fascinating tie-ins therewith: Songs in the Key of X: Music from and Inspired by The X-Files.

This is also one of the strangest (even for this show) inclusions in the overall X-Files Canon for a number of reasons. First of all, Songs in the Key of X is not actually a soundtrack. Oh, sure, the opening track is Mark Snow’s recognizable “X-Files Theme (Main Title)” and the album ends with a P.M. Dawn remix of the same piece, but The X-Files wasn’t exactly a “variety show” known for its musical interludes.

True, Nick Cave and the Bad Seeds’ “Red Right Hand” was heard in the second season’s episode “Ascension” (from October, 1994). Conversely, the prominently featured (and wildly fitting) song “Unmarked Helicopters” by Soul Coughing appears as the very second track on the album and wasn’t heard on The X-Files until the fourth season’s “Max”, a full year and seven days after this album was released. That said, both songs are excellent inclusions on this overall brilliant compilation.

Just about nothing else on this “soundtrack” was actually ever heard on the show at all. Hence, the “Inspired by” is less a title inclusion than it is a disclaimer. That’s right. This album was a marketing tie-in almost exclusively. Virtually no songs from the show had (yet) appeared. It was like a grab bag of creepy music that had nothing to do with each other, Mulder, Scully, Chris Carter or any of the monsters-of-the-week we had come to know love and loathe on the show. The thing was, this was at just about the height of the surprise-hit’s popularity and by Xenu, executives were going to cash in wherever they could. And it worked. When this was released, Fox could have slapped “The X-Files” on Denture Glue and it would have sold.

What else is strange here? Oh, I’m sorry, is a single album featuring both Nick Cave AND P.M. Dawn and nothing else from the show it purports to represent not oddball enough for you? What are you, an Alien?

How about R.E.M., just off the heels of their much harder-rocking Monster album? Here, the band eschews the distorted edge they had recently flirted with for a collection of light arpeggios called “Star Me Kitten” which… doesn’t even feature Michael Stipe on vocals. Instead we get none other than William S. Burroughs on lead vocals. Yeah, the wife-shooting, drug munching, homosexual (but twice-married) experimental writer of Junkie and Queer gives us a decidedly weird performance, less “song” than “spoken word interpretation” during which he slurs his words and roughly mumbles “fuck me kitten” while the band seems to be attempting to hold him up to keep him from falling forward and onto his face. Let me say that again, the beatnik author of Naked Lunch performs a spoken word song with R.E.M. as his backing band. What could be more “X-Files” than that?

Please allow me to shake that off and continue. Sheryl Crow gives us “On The Outside” while Danzig gives us “Deep”. Still shaking from those last two paragraphs? Drink deep. Glenn Danzig, from the Misfits, Samhain and his eponymous band… shares a bill with Sheryl Crow. And this isn’t one of his crooning tunes like the one he contributed to the Less Than Zero Soundtrack. “Deep” has about as much to do with the singer of “Every Day is a Winding Road” as R.E.M. has to do with William S. Burroughs or Brian Eno has to do with Elvis Costello.

Speaking of which, Elvis Costello and Brian Eno team up on this record to bring us “My Dark Life”.

Yeah. You saw that coming, right?

That isn’t the last of our joint projects either, though the next one makes a bit more sense. Rob Zombie and Alice Cooper seem like a pretty good fit, all told, right? Right. That’s why their contribution to the album, named “Hands of Death (Burn Baby Burn)” (because, of course it was), ended up being nominated for a Grammy. They lost to Rage Against the Machine, though, which brings us (kicking and screaming) to the question of just why Rage Against the Machine wasn’t on this album? Too “on the nose”?

A highlight of the album is the always-excellent Frank Black with his pensive, introspective and superb number “Man of Steel”. Frank Black was at something of a crossroads in his music career. He had come out of his phase that sounded like an extension of his old band The Pixies and had started to experiment with an edgier rock sound that would (the very next year) be heard on the ingenious Frank Black and the Catholics album. Still, the artist once known as “Black Francis” had not shed his weird UFO-enthusiast persona (nor has he yet, really), which makes not only “Man of Steel” a great track, but perfect for this album as well.

Screamin’ Jay Hawkins can be heard on “Frenzy” just after Danzig’s song which, in turn, is just after The Meat Puppets’ “Unexplained”. The jury is out on whether that title is in relation to the song arrangements. Add the fact that industrial rock band Filter’s contribution “Thanks Bro” is a mellow, light, almost sleepy song that leads right into “Man of Steel” and you’ve got one hell of a puzzled order on your hands. And, cousin, that’s a compliment.

Foo Fighters (whose name, appropriately, comes from aerial phenomena like UFOs) contributed a cover of Tubeway Army’s “Down in the Park”, written by Gary Numan. There’s another one worthy of an X-File itself… The Foo Fighters covered Gary Numan. What planet are we on?

To make sure we’re all ready for the P.M. Dawn remix of “X-Files Theme” we are greeted with… another P.M. Dawn song. That’s right, on an album diverse enough to feature Hawkins, Danzig, Crow and Burroughs on the same setlist, P.M. Dawn appears twice… in a row (the first time with a pop song called “If You Never Say Goodbye”).

So that’s the whole album, right? Well… no, not exactly. If one pays attention to the liner notes of the inlay booklet (which I’ll get to in a minute), the words “Nick Cave and the Dirty Three would like you to know that ‘0’ is also a number” can be read.

What does that mean? Who are “The Dirty Three”? That’s a pretty big difference from “The Bad Seeds” to be blamed on a typo. Well, The Dirty Three are a trio from Australia with a good bit of crossover with The Bad Seeds (especially considering the fact that Warren Ellis is a member of both bands). Teaming up with Nick Cave himself, the trio contributed two songs to the album, “Time Jesum Transeuntum Et Non Riverentum” and a third version of “X-Files Theme (Main Title)”.

Where the hell are they? Remember hidden tracks? They got popular on CDs in the 1990s. That’s why both Nirvana’s Nevermind and Urge Overkill’s Saturation feature an extra song many minutes after the “last” song on each album had ended. Don’t try fast forwarding after your P.M. Dawn fix, though, because the Nick Cave/ Dirty Three songs aren’t there. Instead, producers hid them in the CD’s pregap (hence, track “0”), forcing listeners to rewind almost ten minutes to hear these two songs… manually. You got something better to do?

Hey, Mulder almost died searching for “the truth”, the least you can do is hold down the “reverse” button for a few minutes to listen to a little Nick Cave, right?

Like I said, the album is actually great and almost infinitely listenable. Yeah, that sounds unlikely considering the bizarre nature of the record, but even though this tie-in is far from a “soundtrack” (fans would have to wait until the following October’s The Truth and the Light: Music from the X-Files for that), it is still a fantastic listen for music fans. It has very little to do with The X-Files aside from the thrice-included theme, but it’s a great compilation to say the least.

Even the cover itself feels like something spat out and reprocessed on Bizarro World (and I’m not just talking about the hint on where to hear the hidden Nick Cave songs, either). Yes, the familiar typewritten X graces the cover, surrounded by a shadowy “Grey Alien” and, yes, cartoonish representations of Mulder and Scully are shining their flashlights on the poor, elusive little guy, but check out the rest of the damned thing.

Who is that leaning over Mulder’s shoulder? Beelzebub? Aleister Crowley’s pet chimera? What are those things on the other side? Werewolves? Demon Dogs? Why are they hanging out with Zombies? I think that’s a little more interesting than an alien guy minding his own business. Why aren’t Mulder and Scully shining their lights on those things? They’re on the lawn of the U.S. Capitol Building for Heaven’s sake, man. Do something, FBI! Do something!

At least I think that’s the Capitol. I’m not sure I remember Gargoyles and beaked Grim Reapers as part of the architecture. Is that why Skinner looks so depressed?

Okay, so the rest of the image fits for fans (though I have to wonder if the running, headless chicken was a foreshadow of the show’s latter day occasional aimlessness). We get the well-known “He is One” image, some alien babies in a can and a whole collection of baddies manifesting themselves in Cancer Man’s cigarette smoke (just under a triangular UFO).

My favorite part, though, is the creepy guy seeming to escape from the Capitol Building through a tunnel he’s digging with a little hammer. Cool… I guess.

Fold the whole thing out and you’ve got a wall-poster that can keep you in nightmares for weeks. Then you can flip the disc case over and see Mr. X’s window tape and yet another freaky alien staring in at you from behind the uncanny track listing of this very album (minus, again, the songs by Dirty Three and Nick Cave which are “secret”, right?).

So, yes, I’ll grant you, the cover has a lot (or, to that date, just about everything) to do with The X-Files. The theme shows up three times (or two if you’re not an alien hunter) and one of the songs had previously appeared on the show. Everything else? Zero, Zilch, Nada.

And you know what? I love it. Not only does this collection of inexplicable and unrelated tunes rock (for all the mismatches, there isn’t a truly bad song on the disc), it also fits the mystery of the show, especially with those hidden tracks.

A couple of years later the first X-Files movie hit theaters with an equally mysterious soundtrack. Soon, The X-Files will be back for another short run on the old boob tube. You check it out… I’ll be at home rewinding the upcoming soundtrack with the volume turned way up. 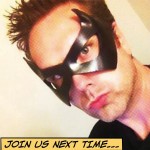 JC Macek III is the creator of WorldsGreatestCritic.com and the Dead Man of the Year Awards. He denies being the desperado who once killed a man just for snoring too loud. His addiction to music rocketed forward to disturbing degrees when he discovered the Original Broadway Cast Recording of HAIR in an antique shop in Raleigh, North Carolina. JC is also a rock climber, mountain biker, actor, guitarist, bassist and vigilante. He holds a bachelor's degree in English Literature from Louisiana State University and has written for multiple print and online publications worldwide.