“I’m not looking for alligator sausage at this place.” 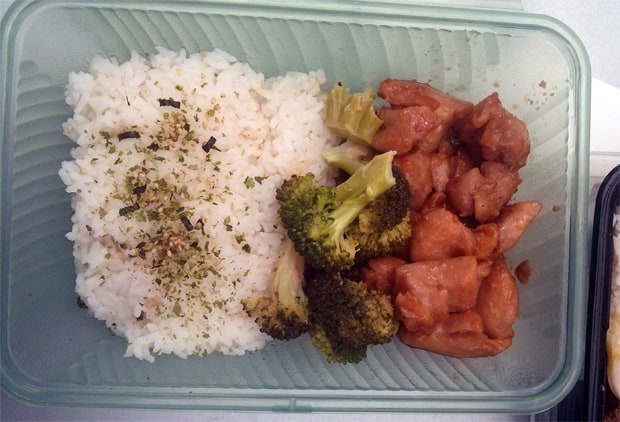 This is a brand-new cart (as of June 2015). I believe we arrived their second day in operation. They have a lot going for them. For $5-6.50 you can get a small variety of pork or chicken dishes with cute names. We opted for the Frickin’ Chicken ($6.50), the Grumpy Pig ($6.50) and the Petit Pork Hero ($5.00). The attendant was surprised we ordered so much, but we are shooting for variety here!

As we ordered, we learned that they had just opened (they bought the cart from Masala, a non-descript Indian place) and the attendant was from Hainan, China, by way of Panama. When we asked for chopsticks, she said that they only served things with forks to make their food more accessible.

This made us worry a bit. “Accessible” food is usually altered to an idea of what people think their audience wants, not to an actual palate that is in reality. It’s like “Chinese and American” restaurants: it’s simply the worst of both worlds.

One of our dishes exemplified this miss: the Petit Pork Hero. The pork was marinated in a sweet-soy sauce which worked really well. It was topped with a mildly spiced mayo which neither added nor detracted from the dish. But all of that sat on a soggy, uncooked, white-bread hot dog bun (unlike their pictures, which features a more ciabatta/grilled looking bun). Neither of us could force ourselves to eat the bun. It just looked… sad. The Frickin’ Chicken was better: it had a nice tang of an authentic Chinese vinegar and the rice was topped with a bit of nori-sesame seasoning for a slightly oceanic flavor. The steamed broccoli accompaniment, though, was a limp, unappetizing addition–try stir-frying it with garlic next time. The Grumpy Pig was the best of the three: marinated pork belly with a great selection of pickled vegetables and a side of rice. It felt fairly “authentic” to us.
We recommend that they go with the cooking of Hainan instead of trying to pander (say that like a Brit!) to their audience. There are zero Hainanese restaurants in town (in America?), and they’re off to a really good start.

Time: It took us about 8 minutes to get our food. They cooked it fresh to order. We walked to the park and finished our meal in under 25 minutes, so we’re good for a quick meal.

Maybe we were hungry that day, but the attendant’s quip about ordering three ended up being inaccurate: the two of us polished off all three (sans bun and broccoli) dishes pretty easily. We felt the portions were smallish, but that was reflected in the prices of around $6 a plate. So, this is a so-so value.

Sustainability-3: They use Go Box and organic chicken and vegetables. Again, good idea and good start, you guys. Their regular packaging, though, is totally plastic and not recyclable.

Fear Factor-1: I think they’ve ameliorated any fears that a grandma would have: they have a super clean cart and a cute, disarming menu. There’s not a lot of challenge here, even flavor wise, we’re not pushing envelopes for people who eat even Americanized Chinese food. I would actually recommend that they up the fear factor in this case with something a bit more challenging to the American palate.

Staying Power-3: This is hard to predict, of course, but based on their value and quality, I’m going with a 50/50 here. I’d return to try this again with hopefully a few more daring entrees. Even without the daring entrees, I’d eat the Grumpy Pig again.

Creativity-4: This is different from many of the Chinese places that tend to go the deep-fried-meats-with-sweet-sour-sauces direction. Petit Panda encompasses the fresher angle of authentic Chinese cooking, with marinated meats, pickled vegetables and steamed vegetables. And they have cute names for their food. The Petit Pork Hero was also quite a creative dish.

Huge slices of thick-crust, Chicago-style pizza for $5-$6. If you care for a Chicago Dog, they have one of those as well for $4.

For the second time in a row, we were asked if we were getting food for more than just ourselves; their short menu consisted of a pepperoni, cheese (both $5), sausage ($6 +$1 if you want arugula on it) and a Chicago Dog($4). They had a root beer float on special for $4. We opted for everything but the root beer float and arugula.

When we got our food, we realized why he asked. These slices were the size of personal pan pizzas.

Both of us hadn’t really had “real” Chicago thick crust pizza. To my East-Coast-born dining compatriot, he said that “I have to think of it as something other than pizza,” not that it isn’t pizza, but it is so distinct from the thin-crust New York pies that it is practically something else. We disagree on these matters: I think Chicago style is a viable, even superior, option for pizza. It’s like arguing that a Great Dane is not a dog, but a Chihuahua is. They’re both dogs.

Both of us enjoyed the sweet tomato sauce atop a thick, buttery crust covered with cheese. It was sort of an inside-out pizza. The house-made sausage was a worthy investment of an extra dollar–spiced like a really good Italian sausage, it made the slice sing.

The hot dog was fine–the fresh tomato and sport pepper were a little different from normal hot dogs, the pickle slices were good, but the dog and bun itself weren’t special. We think it is mostly for homesick Chicagoans.

Time: They opened at about 11:45. We were both willing to wait that 15 minutes because we had psyched ourselves up for pizza. We got our order 10 minutes later–the pies were fresh and needed to cool a bit. We were done with our meal within 25 minutes of ordering. Well, my partner was done before me–he could only finish the half-dog and a slice. I lingered a bit longer over conversation, eventually finishing the second slice.

Value-5: The ingredients seemed to be high quality and both of us agreed that one slice would have been enough for both of us. $6 for a “slice” of pizza this enormous is a great deal, especially for pizza in this town which seems to be highly overpriced for whatever reason.

Gut check at 3pm: Psh. I was full until 9pm. I skipped dinner entirely.

Sustainability-2: House-made sausage, local arugula and a Go Box. There’s something home-grown and local about this place.

Fear Factor-2: The slice, gloppy with tomato sauce on top and requiring a fork and spoon, massive in stature is a little intimidating. But other than that… well, it’s pizza. Come on. Even a kid would eat this (for three days).

Staying Power-4: We ran into several return customers while we were there. The owner seemed to know everyone by name. Yelp rates it at 5 stars and their Facebook page has 50–509 now–likes. They’re about a year and a half old, and they’ve got a great spot in the Megapod. The future seems bright for this one.

Creativity-2: For some reason, most Portland pizza places try to appeal to their New York contingency, ignoring our Midwestern transplants. Thick gets a point for this. But pizza isn’t exactly a creative endeavor, nor should it be. This is the just-right score for this place: because I’m not looking for alligator sausage at this place. No gimmicks, no nonsense: this is traditional Chicago food (we’re assuming) done right (as far as we’re concerned). 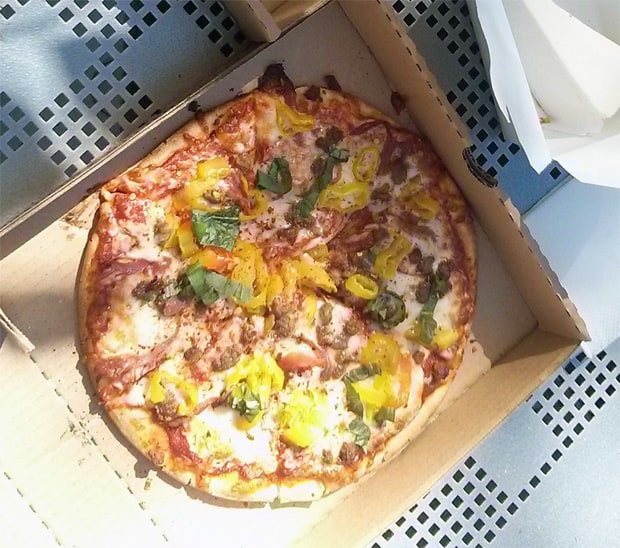 Synopsis: We took the summer off and the pod looks completely different. For one, Verona Pizza and Pasta, which opened three weeks ago, took over for Gauffre Gourmet, a waffle place who has been around for the better part of three years, at least. Verona offers a variety of menu items, from simple to complex pizzas ranging from $5-8, salads, and pasta. We opted for the pizza, which was fresh baked. The owner was a Bulgarian/Italian who spoke seven languages and was obviously pretty passionate about what he was doing here, which included making his own dough. A little basil plant sat inside.

Both our pizzas were 10 inches in diameter. The Chicken Alfredo was rich and slightly gooey; the crunch of the thin, hand-made crust offset it nicely. The Cornicione ($8), which included peperoncini, prosciutto and sausage, had acidic notes in the pepperoncini and tomato sauce; the melty cheese was nicely savory. We threw in an “Italian Cheesecake” for $3.50 to round it out. He chopped off a couple of leaves of that little basil plant as a nice extra for us.

Time: It took us approximately a half hour to order, get our food (about 20 minutes–it was freshly baked and hot) and walk to our destination. All in all, our lunch was just under an hour.

Value-3: These pizzas are priced right and are perfectly filling. It was a goodly amount of food, but not a gut-bomb. The “Italian” Cheesecake had a layer of frost on it and paper on the side. It was obviously store-bought somewhere, but neither of us have been to Trader Joe’s or Costco to exactly locate it. It was good, but nothing like the pizza.

Gut check at 3pm: I feel great. Dinner is a maybe.

Sustainability-2: Well, the fresh basil is a perk, but not a point. He gets a point for making his own dough, though. He offers Go Box, but not for the pizza, understandably.

Fear Factor-1: Unadventurous fare, but pleasing. C’mon, pizza is children’s food at this point. And the place is sparkling clean.

Staying Power-2: This is a tough one. With the overhaul of the pod over the summer, I think we’re going to be a bit tougher on this score, not because a place is good or bad, but because it seems more likely that even our favorite places have seemed to go away.

Location is a factor here. Simply put, he set up shop next door to a pizza place. Were he on the other side of the pod against the six million Middle Eastern carts, he will probably fare better.

Creativity-1: These are straight up pizza, pasta and salad dishes. No fusion, no fuss.