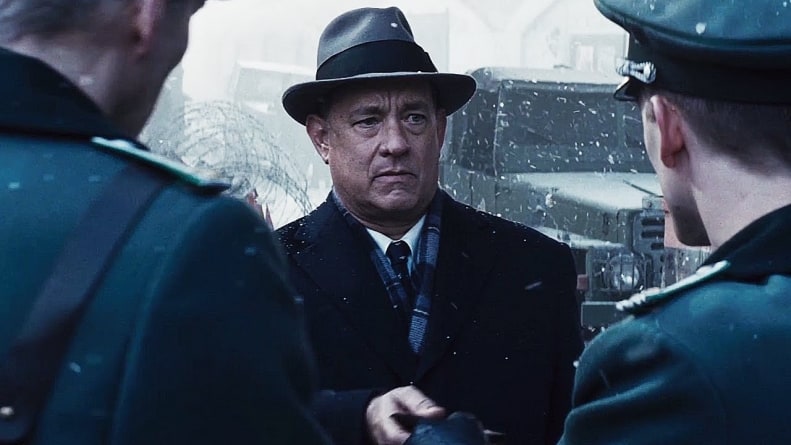 Bridge of Spies falls into a similar category with many of the director’s lesser works.

For Steven Spielberg to follow-up his masterful Lincoln with something equally grand would be an amazing feat. His latest, Bridge of Spies, falls into a similar category with many of the director’s lesser works: solidly-made curiosities that cannot reach the soaring heights of his filmography’s upper reaches. Spielberg has made a strong spy movie, but Bridge of Spies won’t be remembered as one of his greatest works.

The movie’s opening scene is its most taut. Rudolf Abel (Mark Rylance) is a Soviet spy living in Brooklyn in the late ‘50s. As we learn in a watered-down title card, the Cold War is in full swing. When we first meet Abel, he is working on a self-portrait. The phone rings and he stops painting to silently listen to the caller. He then steps out of his apartment and onto the train, where he is trailed by government agents. In this nearly silent sequence, we follow both Abel and the agents tracking him as they make their way on the subway, through the streets of New York and into a park where Abel receives a hidden communique, which results in his arrest. It’s a gripping sequence, even when we’re not already invested in the character. Sadly, nothing else in Bridge of Spies reaches this level of suspense.

Enter James Donovan (Tom Hanks), the man assigned to defend the spy. Donovan, who mainly handles insurance law, is hesitant to take the case, completely aware of how the American public will view the man protecting a KGB agent. Once he does take the case, Donovan rabidly defends Abel, who is placidly likable, aware that the decks are stacked against his charge. “Everyone deserves a defense,” Donovan reasons. “Everyone matters.” It’s the type of platitude that Spielberg hones in on, condensed bits of wisdom such as “earn this” and “the list is life” that is the stuff of movie poster taglines.

It also feels somewhat reductive. There is no moral grey area with Donovan. Even when his neighbors and colleagues revile him for defending Abel, he sticks to his guns. Hanks, always good, paints Donovan with some layered nuance, but this is as close as he’s come to fulfilling the Jimmy Stewart reputation that has dogged him for years now. Donovan is a good man who believes in the principles on which America was founded. Rah-rah, etc. Spielberg isn’t about wrapping oneself in the American flag and doing whatever sounds good. There is a clumsy sequence after Abel is convicted where he flashes to children reciting the Pledge of Allegiance and watching frightening films about nuclear holocaust. Spielberg has been a humanist his entire career. Just look to the scene where Liam Neeson breaks down crying at the end of Schindler’s List. But the “everyone matters” argument is a bit broad, especially in a movie about the Cold War. Bridge of Spies could have done with more of the moral ambiguity that slithers throughout Sicario or even the examination of violence in his own Munich.

Bridge of Spies does effectively keep you guessing as to just what type of film it will become. It may seem like a courtroom thriller at first, but when an American pilot flying a U-2 spy plane is shot down over Russia, the film transforms into a race against the clock as Donovan travels to Europe to broker a trade: Abel for the flyboy who is captured by the Soviets. The negotiations hit a snag when a second American—a student who crossed into East Berlin as the wall is being built—is also abducted. Donovan must find a way, despite the protestations of the CIA, to free both the men when Abel is the only piece he has to offer.

Nothing in the film’s second half feels remotely suspenseful. The script, written by Matt Charman and the Coen Brothers, hits all the important points, but for a spy movie, Bridge of Spies feels somewhat inert. Spielberg tries to work his magic with big set pieces, this time in the newly walled-off East Berlin, but they lack the grandeur of his best work that lights up Saving Private Ryan and Schindler’s List. The atrocities feel light here and the one scene that plays horrific (Donovan observes from a train the shooting deaths of people trying to scale the wall) is brought back at the end in yet another example of how Spielberg sometimes cannot rein in his cutesy tendencies.

That we never get to know Donovan beyond his crusading is also to the film’s detriment. Hanks seems like he is playing Hanks. As he catches a cold in the second half, I couldn’t help but think of his character in Joe Versus the Volcano. At least that character has some sort of epiphany midway through the film. And that lack of characterization is the biggest problem here. Spielberg paints everything in broad strokes, and yet for a character-driven spy film to succeed, it’s the smaller moments that are the most important—but here they’re left behind.