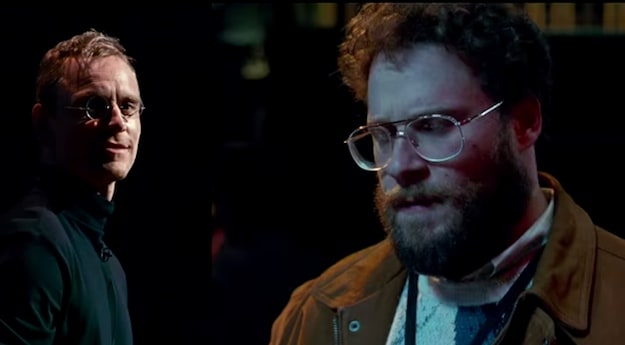 Much like its protagonist, Steve Jobs wildly succeeds despite its flaws.

“It’s not binary—you can be gifted and decent.” This scathing rebuke of Apple’s mastermind in Danny Boyle’s Steve Jobs sums up the genius futurist’s abrasive interpersonal relations. Driven by an all-consuming desire to actualize his visionary technological ideas, Jobs did things his way, everyone else be damned. This stretched as far as denying the results of a paternity test and for several years refusing to acknowledge his daughter as of his own blood.

In Boyle’s film, Jobs (Michael Fassbender) pulls no punches in his relentless pursuit of Silicon Valley domination, but his biggest row is with Apple’s co-founder, Steve Wozniak (Seth Rogen), in front of dozens of underlings. Woz seeks a token shout-out to his Apple II team at Jobs’ iMac launch, because the Apple II, though outdated, had kept Apple financially afloat during the relative failure of Jobs’ baby, the original Macintosh. It’s the right thing to do, especially because Jobs doesn’t know how to write code and instead owes at least a portion of his success to his colleagues. But Jobs refuses to look anywhere but forward, though Woz accuses him of stubbornly refusing to acknowledge that something good could’ve happened when Jobs wasn’t in the room.

Clear Oscar bait, Steve Jobs occasionally visually echoes a reality-based Birdman, with the majority of the film taking place in dressing rooms and backstage corridors as Jobs and his crew frantically prepare for the spectacle of each new celebrated launch. Opening in 1984, in the wake of Macintosh’s much-lauded dystopian Super Bowl commercial, Jobs eviscerates his system software designer Andy Hertzfeld (Michael Stuhlbarg), who’s having difficulty troubleshooting a system error that prevents the computer from saying “hello.” Jobs is singularly focused on the Macintosh speaking to the audience, insisting that computers were made frightening by films like 2001: A Space Odyssey, and he must endear them to the American public. Meanwhile, his young daughter’s mother (Katherine Waterston) berates him because he only pays a pittance in child support while sitting on multi-millions. All while Jobs’ marketing executive and voice of reason, Joanna Hoffman (Kate Winslet), tirelessly works to keep the entire launch from collapsing under Jobs’ ego.

Aaron Sorkin’s incisively witty script wisely concentrates on the tumultuous period between 1984 and 1998 when Jobs’ innovative prowess and increasing celebrity didn’t automatically translate into huge sales. For as ubiquitous as iEverythings are these days, it’s more intriguing to peer into the pre-internet age, when people still needed to be convinced about the importance of owning a computer. During this span, Jobs was also forced out of Apple, and he formed the competing NeXT (it’s “a perfect cube!”) to ultimately throw down a gambit that would lead him back to the top of the mountain.

We’ll be talking about Steve Jobs again come Oscar season. The film hearkens to last year’s tortured genius of Alan Turing in The Imitation Game, and Turing even gets a protracted mention in this film, as Jobs insists that the bitten apple logo has nothing to do with the cyanide-laced fruit with which Turing took his own life. Fassbender again proves that he’s one of the finest actors working in Hollywood today. Winslet is nearly unrecognizable in the early-going, and effortlessly wields a believable Eastern European accent. Rogen seems like the only possible actor who could embody the schlubby Woz. And Jeff Daniels rounds out a take-no-prisoners cast as disgraced Apple CEO John Sculley, a man both in awe of Jobs and often forced to become his adversary.

Given its corporate subject matter, Steve Jobs has a few dry lulls, and the emphasis on Jobs’ at-times difficult relationship with his daughter feels somewhat forced, as though Boyle needed to find a way to humanize an otherwise ruthless technological titan. We thankfully are spared any mention of Jobs’ long cancer battle or his early death, keeping the onus of the film squarely on the toil required for what Jobs dedicated his life to: creating the future. Much like its namesake protagonist, Steve Jobs wildly succeeds despite its flaws, painting the portrait of a difficult man who helped change the world.