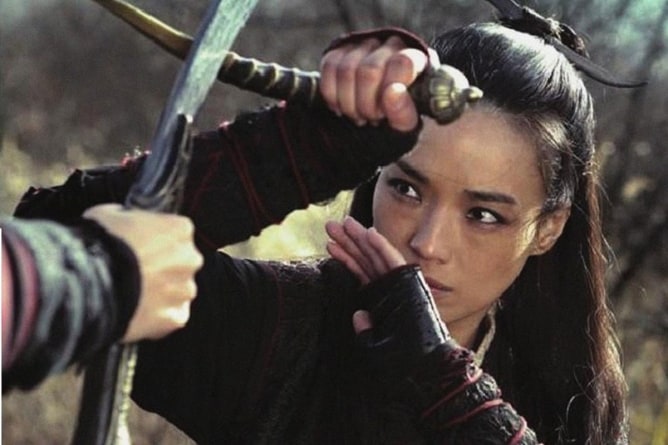 The Assassin is a work of nonviolence in a violent genre.

If history is written by the winners, Hou Hsiao-hsien’s filmography has long marked a chance for the losers to have their say. His breakthrough features of the ‘90s chronicled the tortuous history of Taiwan as it related to its near-constant state of occupation from the late-19th century to present, from imperial Japan to the nationalist Chinese army fleeing Mao Zedong. Even the director’s more character-oriented, contemporary work is indebted to history, its listless protagonists informed by a national identity crisis and the films themselves referencing past works like The Red Balloon and the work of Yasujiro Ozu.

The Assassin marks the meeting point of Hou’s classic and recent films. Set in 9th-century China under the Tang Dynasty, the film returns the director to his explicitly historical mien, while its wuxia genre similarly indulges his increasing acknowledgement of film history. But fair warning: anyone expecting the genre’s usual feats of dazzling swordplay and martial arts will leave disappointed. Just as Wong Kar-wai used wuxia as a pretense for pursuing his most personal themes with Ashes of Time, so too does Hou freely dispense with convention in favor of his idiosyncratic vision. The stylistic flourishes are present from the start, with the film’s opening rendered in high-contrast black and white as killer Nie Yinniang (Shu Qi) botches an assassination of a local lord when pity stays her hand. This earns a punishment from Yinniang’s master, the nun Jiaxin (Sheu Fang-yi), who forces her hired hand to prove her loyalty by taking out her cousin, Tian Ji’an (Chang Chen), governor of the Weibo province.

The film settles into color from there, but it retains its monochromatic emotion. A full-frame ratio vertically orients the frame, so that even the many landscape shots call attention to the empty space of the sky as much as the contours of the terrain. Interior shots use this ratio to call attention to Yinniang hiding in the rafters as she scouts her prey, the black-clad killer barely perceptible as she hovers over Tian’s clandestine meetings with advisors and intimate discussions with his wife. These long-shot compositions may bury Qi in the frame, but the maximize her character’s reluctance to fulfill her task to kill the man to whom she was once promised.

Propelled by Yinniang’s emotional state, the narrative quickly collapses in favor of elliptical impressionism that trades a coherent notion of what is going on for evocative images. When she returns home, Yinniang’s inability to fit back in with her family can be seen in her ascetic clothing as it relates to the opulence around her, while the film’s action mostly relates to the killer’s curious, longing surveillance. One scene in particular stands out as one of the most impeccably choreographed of Hou’s career, and it involves no violence at all. It occurs when Yinniang approaches Tian’s bed chamber one night, her entrance filtered through the overlapping silk curtains of his bed frame. Illuminated by candlelight, the wafting curtains take on a surreal edge that makes the woman not simply appear but slowly materialize, as if she had conjured herself out of the past to haunt the lover that never was. It’s an oblique shot, but one with a strikingly clear purpose, and that approach similarly defines the rare moments of action. Bloodshed is almost nonexistent in the film; when Yinniang gets into skirmishes, she ends fights not by killing Tian or his soldiers but by proving that she can, disarming them and sprinting off while they contemplate their loss. Is she prolonging the inevitable, or putting forward a nobler kind of martial arts, one that exemplifies the expression of technique over its grislier result?

Fundamentally, The Assassin is a work of nonviolence in a violent genre. Where most such films tend to have their cake and eat it too, providing all the carnage that puts asses in seats while ultimately repudiating their own brutality, Hou’s film all but completely omits its action in favor of the reverberations of guilt and regret that both precede it and follow. This is a common refrain of his filmography, which charts ruthless regimes but banishes torture and beating to either the vanishing point of his frame or outside it entirely. But his (non-)framing of this film’s violence has deeper political implications beyond ethical views of on-screen fighting. Tian, as the leader of one of the few provinces still independent of Tang control, clearly stands in for a nebulous character of China’s spirit, be it the Mainland’s own shifting identity or that of Taiwan. The imperial civil wars are the ancient precursors to China’s modern internal conflicts, and by forestalling her role in political mapping, the assassin seems to defy the arc of Chinese history itself.