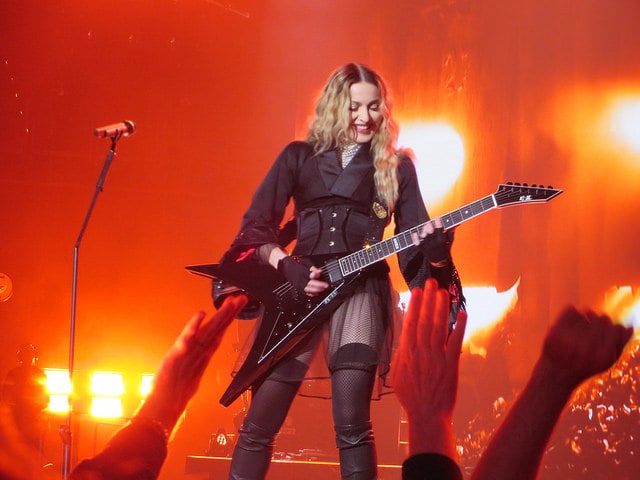 Midway through her set at Portland’s Moda Center, Madonna paused to show off her dancers. It is unclear whether the moment was scripted or not, but the singer cajoled some of the men in her troupe to lift their shirts and show off their rippling abdominal muscles. The crowd exploded with catcall whistles and applause. Right there, in that moment of exploitation and celebration, lays the conundrum of Madonna.

Following lead-in music by contemporary Michael Jackson, a giant screen featuring Madonna and Mike Tyson became the focus. Dancers dressed in Genghis Khan-era outfits and sporting giant crosses poured onto the stage. Anticipation was high. If anything, Madonna knows how to make an entrance. Then she arrived, lowered from the top of the stage in a cage. People went nuts. Boom. Then she burst into “Bitch, I’m Madonna,” and the show was underway.

Madonna can’t simply give a concert. She gives a spectacle, a production with all kinds of bells and whistles. As we waited to get into the Moda Center, two men heckled the crowd, saying we’re all sinners and going to hell. He screamed that homosexuals enjoy bestiality. Had he paid to get into the show he would have fainted. During “Holy Water,” nuns danced on poles as Madonna and a multi-ethnic group of dancers recreated the last supper. At another point, Madonna egged a gay couple in the audience into a lusty bout of French kissing.

Madonna may have been the main attraction, but one would be remiss not to mention her dancers. During her many costume changes, the dancers kept the concert going with acrobatic moves. A shirtless man danced with a white sheet, blown about by giant fans that made it seem as if it had come alive. Another dancer slid and skated down a screen as if dancing on stars. They bolstered the show, made Madonna perform harder as they spun her about, strutted down the heart-shaped walkway into the crowd with her, grinded against the singer and let her grind against them.

But Madonna is the star of her own show. How could she not be with such a larger than life persona? She claimed the last time she played Portland was 30 years ago. Could she have been in the public eye for so long? Many of her fans may have aged naturally, looking bravely awkward in leather bondage gear and bustiers, but Madge looked like dynamite. She also made attempts to prove her mettle as a musician, spending a good amount of time playing guitar or ukulele. A solo cover of “La vie en rose” on the ukuele was a particular high point.

If there was anything to complain about, it would be the setlist. Madonna concentrated mainly on newer songs (and, man, “Body Shop” is a bad one), and though she did play some hits (“True Blue,” “Material Girl,” “Like a Virgin,” “La Isla Bonita”), favorites such as “Like a Prayer,” “Borderline” and “Live to Tell” were missed. But Madonna made up for their absence with the plucky crassness that has long defined her.

“It feels so intimate down here at the tip of my penis,” she told the crowd at one point as she stood at the end of the stage that did look quite phallic. “Isn’t it interesting that a heart and a penis are the same shape? God didn’t make a mistake on that one. In my opinion, it’s all about the dick.”