Our foremost documentary directors have to start somewhere, right? Even if Errol Morris’ subjects have become more famous or extraordinary than the people we meet in his 1978 debut, Gates of Heaven, there still is an eerie aura hanging around those who either run or utilize the central focus of the film: pet cemeteries. The first-time filmmaker read about the closing of a California pet cemetery in a newspaper and decided to follow the story as the interred pets were transferred to a different burial ground. But rather than create a linear film about this odd event, Morris concentrates on the oddball collection of people who own the cemeteries and those who chose to have their pets buried there.

Those unfamiliar with Morris’ films should know that he is an interviewer who allows his subjects to talk without interjecting much at all. This technique allows the subject to fill the empty space, to sometimes blather on, to double back on stories, or even flat-out contradict themselves. The conventional documentarian edits down these stories to make a streamlined final product. Morris’ films, however—Gates of Heaven especially—live in those strange moments. Moments in which people would rather talk than succumb to silence. There is less of a mission statement here than with other Morris films. He’s not exonerating a wrongly sentenced man of a crime. There are no Stephen Hawking or Robert McNamara or Donald Rumsfeld-sized figures to revere or take down. The injustices of Abu Ghraib are not explored. But there is something deeper at play here. Gates of Heaven is an exploration of life and death with an inscrutable tone that could be anything from deeply reverent to completely derisive of its subjects: people who are deadly serious about the burial of pets.

In the film’s first section, we meet Floyd McClure, the wheelchair-bound owner of the failed Foothill Pet Cemetery in Los Altos, California. McClure got the idea for the cemetery as a child in North Dakota when his beloved collie was struck and killed one day by a truck. McClure is intensely serious about the business, horrified by the notion that most deceased animals are sent on to rendering plants, places he equates with the “floors of hell.” Yet, like most of the people in the film, McClure is a paradox. Take the scene in which he complains about the smell of rendering plants, arguing that the stench is enough to put him off “that good piece of meat” he is about to sit down and eat for dinner. There is a wryness that exists in the film, but Morris really isn’t making fun of his subjects here. He’s allowing the audience to make their own assumptions. 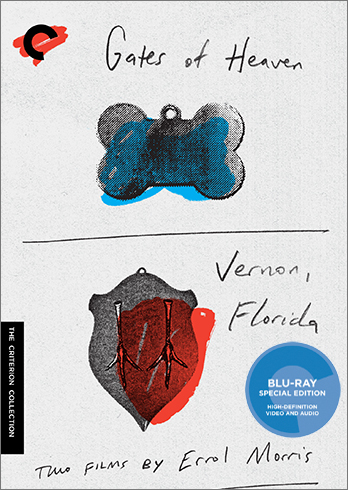 We also meet the other men who lost their stake when Foothill Pet Cemetery went under, lamenting the loss of opportunity and income. Meanwhile, Morris interviews the gleeful owner of a rendering plant, a man who knows that his job is distasteful, but somehow finds a sense of humor in it all. In one of the film’s darkly comic moments, the executive laughs about the disposal of an elephant carcass via a secret agreement with a local zoo. While McClure and his partners are solemnly serious about the business, the rendering executive (who actually gives the most succinct answers of anyone in the film) chuckles his way through his interview. Even when he exposes the clandestine arrangement he has with the zoo, he’s barely able to contain his mirth when he says he is called in when, “Every once in a while they’ll lose a giraffe at the zoo, or they’ll lose Big Bertha, or Joe the Bear.”

Morris moves us to Bubbling Well Pet Memorial Park in Napa during the film’s second half, the place where the animal corpses have been relocated following the closure of Foothill Pet Cemetery. There we meet the loquacious Cal Harberts, who is just as serious as McClure about his business. He is also a man who loves to hear himself talk. Harberts is the perfect Errol Morris subject, someone who will speak at great length without a modicum of self-awareness. His older son, Philip, acts in much the same way. After leaving Salt Lake City, where he sold insurance, the blowhard Philip has returned to help his father with the cemetery. He goes on and on like a self-help guru. He sees life as a series of tasks; his pragmatic point of view sharply contrasting with his grandiloquent father and romantic younger brother. For all of Philip’s type-A bluster, his brother Danny seems to be living in the shattered bubble of the hippie dream. Heartbroken and lonely, Danny also works at the cemetery while filling his downtime writing songs, taking his amplifier and guitar outdoors after hours and playing loudly to an empty valley.

Then there are the people who buy plots at places such as Bubbling Well and Foothill. Morris allows them to describe their grief by allowing them to tell him about their long lost pets. They often speak of their deceased pets as if they had lost a child. In fact, many of them seem to love their departed animals more so than they do other humans.

So what exactly is Gates of Heaven? Werner Herzog, one of the films most vocal supporters, called it a movie made entirely of “guts.” Roger Ebert listed Gates of Heaven as one of his Ten Greatest Films of All Time. He wrote that Morris “made a film about life and death, pride and shame, deception and betrayal and the stubborn quirkiness of human nature.” Gates of Heaven may exist within the pretext of dead animals, but it truly is a work about the strange beauty of the human condition.