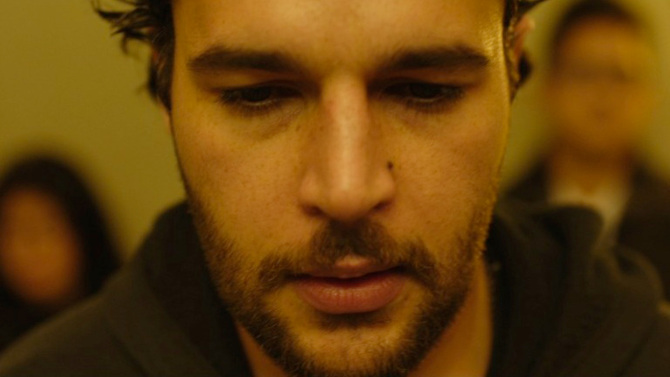 James White is a heartbreaking movie that runs on emotional adrenaline more than dramatic structure.

Call it The Bro’s Progress. The generically titled indie drama James White observes a 20 something New Yorker (Christopher Abbott) who sleeps on his sick mother’s couch. As the movie starts, he’s not a caretaker so much as a guy trying to tune out life.

But to what tune? We meet James nodding in a club-induced daze, his head filling the frame as a hip-hop thump blasts. That’s still not enough to tune out the world so he puts on earbuds and plays Ray Charles. We eventually learn this is his mother’s music. James is trying to find his own beat, but he seems to know that the key to finding himself is through his mother Gail (Cynthia Nixon).

Walking out of the club into broad daylight, James takes a cab to mom’s apartment, where she’s hosting a Shiva service for her ex-husband, James’s estranged father. Mom scolds James for not being there when she needed him, but we see that he is a dutiful son, picking up mom’s cancer medication at the pharmacist. Still, he’s also likely to get into a bar brawl with his buddy Nick (Scott Mescudi, aka Kid Cudi).

James is an unreliable and unpredictable bro but Abbott makes this volatile character into a watchable, troubled puppy. Though writer-director James Mond’s script isn’t all there, he has the great luck to have Abbott (Martha Marcy May Marlene, which Mond produced) on board. The actor conveys plenty without words, in the lost and troubled look on his face in the club and in the worried look on his face as he’s taking a cab uptown. Abbott fills almost every frame of the movie that bears his character’s name, and he earns the marquee, even if the movie may not completely deserve him.

After taking off to Mexico to clear his head James flies back home when mom’s cancer comes back—hard. When her mind starts to go, he rushes her to the hospital and barks at the unhelpful staff like a loyal guard dog, the anger that fueled his bar brawl finally directed at his helplessness in the face of his mother’s mortality. James becomes her dedicated caretaker, but he still can’t handle responsibility entirely, screwing up an interview at New York magazine.

This is the feature debut for Mond, and his loose script doesn’t really develop any characters other than James—even Gail seems like a device whose illness will force her son to grow up. But Abbott keeps the movie grounded, and as his role as caretaker grows more intimate and intense, this guy who’s spent most of the movie running away from life tries his best to keep his mother’s spirits up at the end of hers. James White is a heartbreaking movie that runs on emotional adrenaline more than dramatic structure. Mond clearly has good working relationship with Abbott and his remarkable performance makes this developing collaboration one to watch.