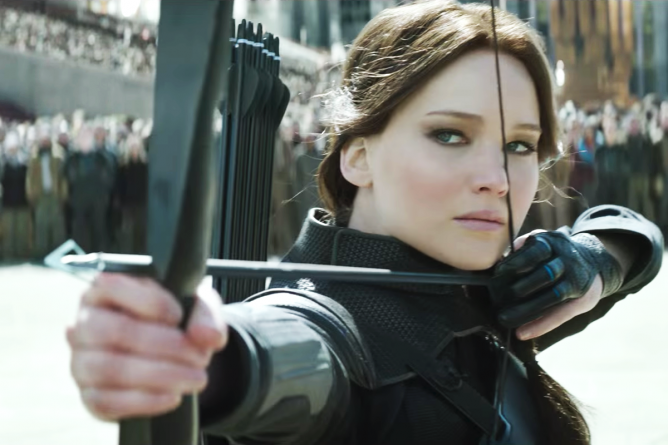 Not even adults have the attention span for the endless talk that fills the first third of this movie.

Has splitting any book, especially one that is part of trilogy, into two different films actually worked out? The penultimate film in the Harry Potter series was easily the worst, and last year’s The Hunger Games: Mockingjay- Part 1 was a turgid affair mired in endless exposition, saving any excitement for its final third. The film added political intrigue to the series as rebel leader Alma Coin (Julianne Moore) co-opts heroine Katniss Everdeen (Jennifer Lawrence) into her scheme to overthrow the villainous President Snow (Donald Sutherland). But intrigue can only go so far without action. The series finally concludes with the poorly named The Hunger Games: Mockingjay- Part 2. It may be heavy on death and destruction, but it suffers from the decision to isolate it from its slower first half.

The movie picks up right where the first part left off. However, a year is a long time to wait, so the filmmakers turn the first act into a boring, uninspired “previously on” segment with too much time dedicated to reminding us just where we left off 12 months ago. It seems like an eternity before Katniss and her allies begin their infiltration of the capital city. Isn’t this film supposed to be for teens? Not even adults have the attention span for the endless talk that fills the first third of this movie.

The fun finally starts when Katniss and her team encounter a series of traps left by President Snow and his game makers. Some of the snares are nothing more than machine guns or explosions, but there are two inspired sequences where it looks like Katniss and her friends may have finally met their match. In the later one, a pack of mutants hunts them through the capital’s sewers. The sequence and its building sense of dread feels lifted right from the Alien franchise. It’s nerve-wracking, scary and inventive and it stands out since absolutely nothing else in the film transcends the terror, even its grim finale.

There is just too much talk about nothing, recapitulating the same tired plot points over and over again. The first film in the franchise was easily the best, a visceral scramble for survival that was just that. Too much story sinks a good thing, and although three books simply replaying Hunger Games wouldn’t work either, there really isn’t anything too exciting going on here. Films about an oppressive regime destroying good people are a dime a dozen, and I found myself longing for the strangeness and awful violence of Snowpiercer.

Characters simply exist to telegraph plot points. I used to care what happened to Katniss and Peeta (Josh Hutcherson), but now it matters little. Real tension should exist, especially now that Peeta has been brainwashed by President Snow, but Hutcherson doesn’t do much else but mope around. The love triangle between Katniss, Peeta and Gale (Liam Hemsworth) is particularly uninspired, its resolution not nearly as tragic as it should be. Finally, none of the minor characters, many newly introduced, do much besides die horrific deaths. It’s hard to care.

With The Hunger Games: Mockingjay- Part 2 the franchise finally sputters to an end. Violent, grim and ultimately lacking the hook that made the first film such an interesting prospect, the movie really is no different than any other vision of a dystopian future. With the proper filmmaker and a writing team with a truer aim, this could have been a really intriguing series. But by compromising and pandering to a lowest common denominator to include audience members of all walks of life, The Hunger Games: Mockingjay- Part 2 plays it safe and misses the mark, closing what could have been an exciting series with a decidedly unoriginal final word.