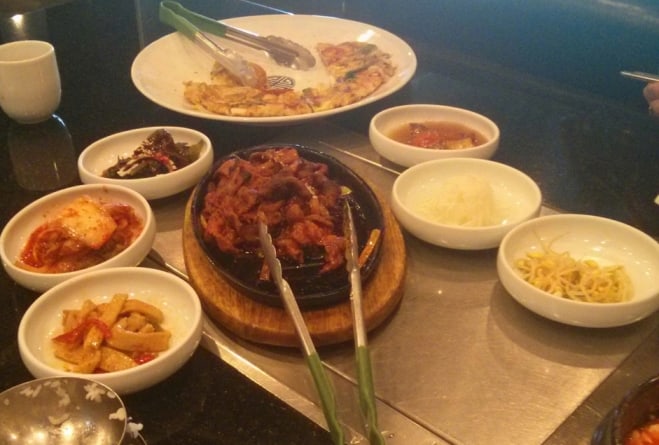 As a Portlander, Las Vegas is disorienting. There’s this weird light-thing coming out of the sky in October; walking across the street is a huge investment in time; the people who live there seem to be in service to tourists (Portland isn’t quite there … yet); water is displayed awkwardly as a resource to be wasted; smoking is still permitted indoors (mostly); and the food is… well, mostly terrible. Especially on The Strip.

I went to Las Vegas for a conference (is there really any other reason to go?) and after that, my wife and I met up with my childhood friend who now lives there. I hadn’t seen him in over 20 years. We needed lunch. And he had a car, which seems to be an essential part of the Vegas experience unless you want to rot and decay on The Strip.

But first, let’s talk about Las Vegas. It is a literal desert oasis. By design and definition, it is a remote, isolated a free-for-all. The mob took over the town installing casinos and the ultimate laissez-faire atmosphere. The results, depending on your perspective, are either spectacular or a laughable mockery of what America strives to be. Either way, it is America’s logical extremity.

But once you get off The Strip, to the land of sun-drenched strip-malls and enormous city blocks, things start to look up. No longer are 12-ounce Budweisers $7, and one no longer has to suffer through overpriced meh food.

Nestled in a humongous strip mall in Las Vegas’s Chinatown, behind a giant golden statue to a mounted Chinese warrior, Mother’s Korean Grill is a food-oasis within the hell-oasis. While we didn’t get a chance to check out the 25 other restaurants in the parking-lot-facing mall (Chinese, Japanese, Filipino, oh my!), we picked Mother’s because my friend and I grew up in a Korean area of town, yet he’d never tried the food before.

The modern, granite-top-tabled interior was clean and beautiful. Korean waitresses bustled about and quickly showed us to a table. They served us banchan, the fermented vegetable and -fish snacks that accompany the meal. One of them, some sort of sweetened, dried fish, was a stand-out hit and one I’d only had once.

We started with the seafood pancake ($10.95), and it exceeded our expectations. My wife and I have had this several times, but the sauce they served it with and the explicit seafood in this, including, I believe, scallops, made this version extraordinary.

We ordered the marinated pork (Dwaeji bulgogi, $19.95), which is, in my opinion, a budget version of the beef bulgogi that is $10 more. It came out in thin strips in a sweet-savory red glaze; chewy, tender, sweet, delicious. I savored the moment, not having had real food in nearly a week. Even though his spice tolerance is very low, our local host was pleased as well. We also had a clay-pot fish stew ($12.95, if I remember right), which was hot and savory and worked well with the sticky rice that accompanied the meal.

We continued chatting and catching up as our banchan was refilled and we grazed until full. The barley-tea teapot was empty. “Finally, a good meal in Las Vegas!”

When all was said and done, the meal for the three of us, with tax and tip, hovered in at around $55. For context, my wife and I got two well drinks, two beers (both on happy hour), and some tacos at a “pub” in the Luxor and that was over $70. Comparatively, this was a steal.

We bid farewell to Las Vegas that night, herding ourselves through the airport like cattle, happy to return to the land of good food and rain. But out of the whole trip, this was one of two favorite meals. If you can find your way out to the Las Vegas Chinatown area (there aren’t any fancy light-posts or anything, you have to just know), I highly recommend giving this place a try. I’m not alone. They were voted best Korean restaurant several times in the local press.

The next time I return to Las Vegas, I will definitely mine this area of town for a little solace away from the terrible, terrible options that pass for food at casinos and strip malls. Oh wait… everything is in a strip mall. Even this gem. Never mind.