*Our best books list includes any book we read in 2015, regardless of release date* 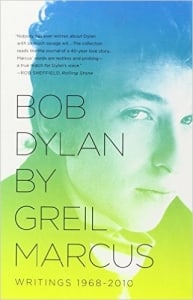 Bob Dylan is one of the most written about artists of the modern era. There is perhaps no other writer who has written as much or as extensively on the subject of Dylan as Greil Marcus. In a number of books, articles and reviews spanning nearly half a century, Marcus has weighed in on Dylan, his music and his mythos. A somewhat daunting body of work from which to pull, Bob Dylan by Greil Marcus: Writings 1968-2010 manages to distill the essence of Marcus’ fascination with the erstwhile Robert Zimmerman and the cult of personality that sprang up around him.

Running roughly in chronological order, Bob Dylan by Greil Marcus shows a sort of parallel artistic evolution. Beginning in 1968, Marcus comes across as a brash young upstart writer; one intent on getting his point across, but not yet entirely confident with his own voice. Much like Dylan himself, Marcus would require several attempts at borrowing from others before perfecting the singular, influential voice for which he is now known.

What is most striking about Bob Dylan by Greil Marcus is the way it plays out as a linear narrative of a tenuous friendship. While the dominant voice is obviously Marcus, Dylan plays a sort of shadow role throughout. As a result, the book reads like a quasi-diary in which Marcus documents his relationship with Dylan, the man, as well as Dylan, the pop demigod.

Alternately fawning, humorous, acerbic and frustrated, Marcus’ tone ebbs and flows along with Dylan’s career. He often skips large chunks of time as if to afford Dylan the benefit of the doubt during his more questionable periods while still holding him accountable for his recorded and cultural legacy. With no one piece outshining another, the book as a whole functions as a sort of autobiographical, one-sided correspondence from one highly influential voice to another. – John Paul 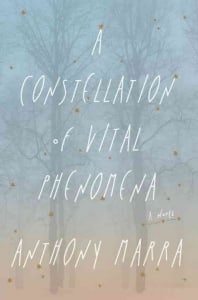 A Constellation of Vital Phenomena: by Anthony Marra

A Constellation of Vital Phenomena is a book of ghosts, a story of people disappearing into the night, leaving family members with human body-sized holes in their hearts. Filled with beautiful prose, Anthony Marra’s serpentine story reads more like the work of a seasoned novelist rather than an author just making his entrance into the literary world. Set in Chechnya, A Constellation of Vital Phenomena skips time between 1994 and 2004, bookended by the two wars that devastated the region.

When the book begins, 8-year-old Havaa escapes a nighttime raid on her house in a tiny village. As the Russians take her father away to an interrogation center from which people never return (or return disfigured) Havaa takes refuge with Akhmed, a local doctor and artist. Desperate to get Havaa to a safe haven, Akhmed takes her away from their village to the city of Volchansk. The loss of Havaa’s father is just the beginning.

A Constellation of Vital Phenomena may ultimately be a tragedy, but Marra leaves his surviving characters with enough hope to prevent a read enveloped in complete darkness. Even in its heartbreaking closing pages, his characters find forgiveness and companionship in the face of torture and death. Yes, life pushes around the gloom and carries on in this phenomenal book. – David Harris 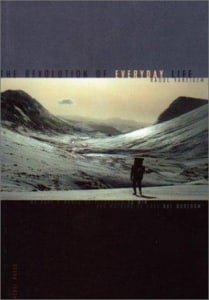 The Revolution of Everyday Life: by Raoul Vaneigem

This Situationist call-to-arms’ most famous quotes are featured early on. In the introduction, Raoul Vaneigem writes, “The best arrangement of a book is none at all, so that the reader can discover his own.” Soon after, he dives into the true purpose of the book with, “People who talk about revolution and class struggle without referring explicitly to everyday life, without understanding what is subversive about love and what is positive in the refusal of constraints, such people have corpses in their mouths.” Clearly, Vaneigem’s 1963-65 analysis attempts to provoke the hesitant masses that wait for a political platform or mass uprising to join communal solidarity of their own volition.

Unfortunately, this excellent screed is less cited than that of Vaneigem’s former colleague, Guy Debord. However, while The Revolution of Everyday Life is much more accessible and considerably less prickly than Debord’s Society of the Spectacle, both texts expect familiarity with French and other intellectual contexts which many readers in translation (by the Situationist International insider Donald Nicholson-Smith) may lack. This book, if you’re willing to put in the work, reads like a series of personal reflections and meditations from a secular rebel who seeks to overcome the limits of modern conformity and thought with stellar results. – John L. Murphy 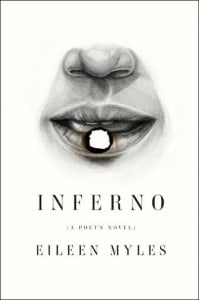 Certain books make you lean into the pages. It’s as if the author’s voice compels you to come closer, closer, until suddenly, you missed your stop and you can’t even remember where you were going in the first place. This year, the book that left me dizzy was Inferno by Eileen Myles. It cost $16 at The Strand and I knew it was worth it because the epigraph was from Walter Benjamin and the first line was, “My English professor’s ass was so beautiful.” Only Myles, the rebel poet of the East Village, could follow a German theoretician with a tribute to a woman’s butt.

Leaping between memories, ideas and inspirations, Inferno reads like a Lou Reed song, doused in Judith Butler and cooked in the oven of William Carlos Williams. She writes with immediacy—and not the canned kind either. When the aforementioned English professor reads one of the protagonist’s poems out loud, Myles writes, “All the details of my life were in exact order and yet I was tumbling in them—out of order like a tremendous wave had hit me and I was thrown off the ship and I awoke or dreaming, or dead I knew not—no I couldn’t speak.” Her prose rambles, but that’s the point. It’s honest, vivid and urgent. Myles isn’t afraid to subvert our expectations of what a book is supposed to be. As she discovers her sexuality and her creative drive, we can only lean closer, missing stop, after stop, after stop. – Erica Peplin 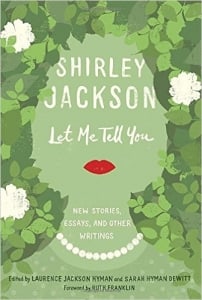 Let Me Tell You: New Stories, Essays and Other Writings: by Shirley Jackson

Shirley Jackson is one of my favorite authors, female or otherwise, across all fiction genres. While “The Lottery” is required reading in any high school literature class, my favorite of Jackson’s Gothic tales has always been We Have Always Lived in the Castle. The novella, and her more widely read The Haunting of Hill House, allows her to expand upon a trademark plot twist while showing off some ingenious talent for writing about the stigmas and classist nature of small-town life. To hear that nearly 60 years after her death a wealth of previously unpublished short stories and essays whose themes run the gamut from horror to ’50s domesticity would be seeing the light of day was, needless to say, thrilling.

Compiled and edited by two of Jackson’s children, Let Me Tell You is a collection that does more justice to her true personality than any that have been previously published. Perhaps that’s because many of the short stories are ones that were rejected by publishers, stories that only contain the seeds of a completed Jackson work or ones that see her indulge in her more whimsical side. But, in reading these stories, it’s easy to see how Jackson is much more than a genre savant; her stories depict society’s latent cruelties, the pressure of social norms and the vagaries of love and marriage.

When writing about herself, she is thoroughly tongue-in-cheek, grumbling, “I loathe writing autobiographical material because if it’s dull no one should have to read it anyway, and if it’s interesting I should be using it for a story.” And when she does sit down to recount “The Real Me,” she naturally casts herself as a real-life witch. There is a wealth of commentary, both in her fiction and her essays, that shows a keen, critical eye capable of satirizing and tackling the faults of her time head-on. All that in one convenient volume, and with just the right amount of “Garlic in Fiction,” as she puts it. – Katherine Springer 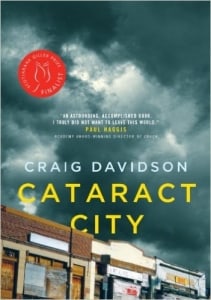 There’s something special about Craig Davidson’s prose. Sure Cataract City has everything you would want from a novel featuring professional wrestling, dog racing, underground boxing rings and border smuggling, but those are just the structures that are brought to life through Davidson’s words. The true wonder of this big, nearly epic novel is in its atoms—the word choice, the sentence structure, the way a phrase can make you laugh or cry while it tears down emotional conventionality. Davidson’s words are as punchy and brutal as the bare-knuckle fights featured in Cataract City. They can rip your heart from your chest with the description of a glance; they can justify a character’s inaction with converse actions. His way with words makes for nothing less than a tremendous success on a structural level.

Davidson’s storytelling talents justify his gift with words as well. He drops readers off in Niagara Falls, Ontario—a place everyone’s seen in one way shape or form—and scoops out all pleasant thoughts of the place by showing off the parts only seen by the people who live there—the seamy, greasy, human parts. And once the novel ends, readers have no choice but to view Cataract City (Niagara’s local nickname) with a new lens.

Craig Davidson’s Cataract City is the crowning achievement of his prolific writing career. While his early novels and stories are tremendously effective, and his psuedonymic horror fiction is legitimately frightening, Cataract City is a composite of everything he’s learned on the way to its creation. It’s a tough, nasty novel. It’s filled with blood and broken bones and wince-worthy moments. But it also has so much heart tied into the deepest darkest moments it’s doubtful anyone but Davidson could have created such a seamless, powerful book about friendship, disappointment, desperation and loss. His secret’s in his words. And talent like his is rare. – Nick Gregorio 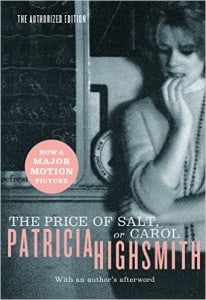 The Price of Salt: by Patricia Highsmith

A long-time fan of Patricia Highsmith’s Tom Ripley novels, I only tackled her 1952 lesbian romance this year to prepare for Todd Haynes’ film adaptation, Carol. While it’s not up to the best of the Ripliad’s standards, her dry and occasionally bleak observations of the world are in full force. Early on, the novel establishes the dreary existence of a lonely and lost shop girl in 1950s Manhattan. It’s a view of old New York filled, not with charm, but with characters that, in the eyes of young Therese, are practically grotesque.

Highsmith’s novels have made some great films, but none of the big-screen adaptations (not even Strangers on a Train or The American Friend) can quite capture Highsmith’s tone—which can reach J. G. Ballard levels of cynicism. That is, until Haynes. The film makes significant changes in points of view (the book is seen only through Therese’s eyes) and occupation (from set designer to photographer). But these changes preserve and put even greater emphasis on Highsmith’s decidedly unromantic view of Therese as a passive young woman caught in the spell of an elder. Not unlike Lolita (published three years after The Price of Salt), the novel becomes a road movie; one whose players run away from, but fail to escape their deepest desires. – Pat Padua