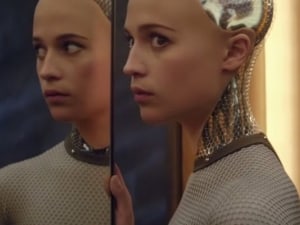 Alicia Vikander is, without question, the breakout star of 2015. With five films released this year, including Oscar-hopeful The Danish Girl, she quite literally has been everywhere. But, for my money, her best performance of the year was as the free-thinking A.I., Ava, in Alex Garland’s Ex Machina. It’s a performance that sees her navigate playing an android playing a human and all the emotional complexities therein. She portrays childlike innocence and mechanical precision simultaneously. It’s easy enough to establish the visual of a girl trapped in a glass box whose helplessness moves Domhnall Gleeson’s Caleb to attempt a prison break of sorts, but Vikander is key to the ambiguity of Garland’s script. Did her android establish a real, emotional connection with Caleb or was she merely manipulating him to her own ends?

This is all the more impressive considering Vikander quite literally has only her face to portray Ava’s nuances. Her humanoid form is simply translucent wire mesh containing her stiff, biomechanical body. Vikander is limited to rigid movements and the mask of humanoid flesh that covers half of her head. But that is enough for her to instill more depth into her character than either of her co-stars. – Katherine Springer 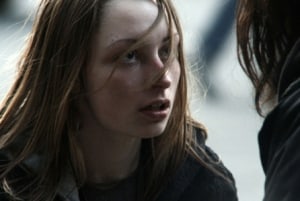 Arielle Holmes in Heaven Knows What

Filmmakers Josh and Benny Safdie met Arielle Holmes on the street. She was 19, homeless and addicted to drugs. After kicking the habit, Holmes went on to become the inspiration and star of their 2015 feature, Heaven Knows What. Making her acting debut, she is magnetic but not in the classic, movie star way. She is the real-life Katniss: a fearless street kid with a stubborn streak. In the opening scene, she asks her ex-boyfriend, “Would you forgive me if I died?” When he says, “Yes,” she slits her wrists. It’s an eye-opening introduction to girl filled with anger, blood and hurt.

The authenticity of Holmes’ performances makes up for any of the film’s sensationalism. The story is, after all, based on her unpublished memoir. Whether stealing from delis, napping in Central Park or chasing a high, the camera follows her every move. Explosive one moment, observant the next, she’s a firecracker wrapped in flower petals. You can’t look away. The naturalism of her performance draws comparison to that of Émilie Dequenne, the star of the Dardenne brothers’ Rosetta (1999). Both women are displaced, strong-willed and boiling with all sorts of resentment.

Holmes proves that Heaven Knows What isn’t actually about drugs. It’s about a girl who doesn’t know any better than to love a boy who doesn’t love her back. In the end, she’s back where she started. Her life is as open as the wound on her wrist. – Erica Peplin 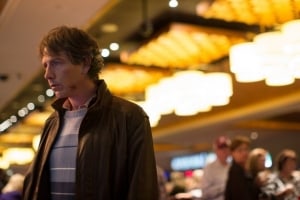 Ben Mendelsohn had the seeming good fortune this year to land a leading role opposite Ryan Reynolds, once voted People magazine’s “Sexiest Man Alive.” Surely this would be a box-office hit that would earn the reliable Australian character actor, perhaps best known for the Netflix series “Bloodline,” a larger audience? Unfortunately, barely anyone saw Mississippi Grind and one of the finest performances of the year. Mendelsohn plays Gerry, a beautiful loser who we meet listening to an instructional CD of poker tips on how to read other players’ body language and keep your own from revealing your hand. Who knew that poker was so much like acting? As you watch Gerry listen to descriptions of the kinds of behaviors that show your hand, you subtly see his own hand in life, desperate and alone. He wants so much to learn how to behave, but instead looks ashamed to recognize himself in a professional poker player’s descriptions of how not to behave. Writer-directors Ryan Fleck and Anna Boden don’t try to explain their characters but simply observe them. Thanks to Mendelsohn and his expressive, sensitive face, Gerry is heartbreaking and sympathetic to watch, even when he repeats the same mistakes that led him to his sad state. – Pat Padua 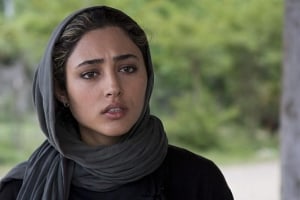 Golshifteh Farahani in About Elly

It’s hard to pick one standout performance in About Elly, a film of such compelling naturalism that the painstaking craft of its construction could easily go unnoticed. But Golshifteh Farahani has perhaps the film’s trickiest role in Sepideh, a middle-class wife whose well-intentioned deceitfulness causes disaster. She invites her daughter’s kindergarten teacher, Elly, along on a weekend retreat to a beach house with her family, two other married couples and their kids and a recently divorced friend visiting from Germany. Her rather transparent goal is to make a match of the two singles, but Elly, about whom little is known, is clearly uncomfortable. When she disappears suddenly, everyone begins to wonder whether something terrible has happened or if she simply left unannounced. The anguish of Sepideh’s guilt, which compounds up as the situation becomes increasingly complicated, is only made worse by the fact that everybody else blames her, too. Adding nuance to all of this is the fact that Sepideh, like the other characters in the film, is a fundamentally decent person, even if her actions are sometimes invasive and manipulative. Farahani successfully invites sympathy—especially when her husband begins attacking her—without turning her character into a figure of pity. – Seth Katz 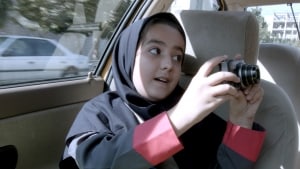 Even without Hana Saeidi, director Jafar Panahi’s niece, Taxi would be a much sprightlier meditation on creativity and nationality than Closed Curtain or This is Not a Film, Panahi’s two previous films. With her, it positively glows. Playing herself, about as real or fictional as any of the other “characters” in the film, Saeidi introduces herself to viewers for chastising her uncle Panahi for being both late to pick her up and for coming in a taxi. That’s not the entrance of a film director, she says. Saeidi is of course kidding, but the combination of adorableness and sass has few rivals in cinema. Saeidi is quick-witted, talkativ, and supremely confident, even when asking questions, and Panahi would likely be driven up the wall if she were not so precious and humorous in doing it.

She is not pure comedic relief, though; her desire to make a “screenable” film, one that follows the governances of her school and the state, provides Taxi with its thematic core, and Saeidi sells a deadly seriousness and earnest desire as effortlessly as she generates laughs. Taxi is about Panahi, creativity and restriction – and cinema – but Saeidi’s performance, like many of the best, creates a new meaning. From a role that could be considered “supporting” comes a new prism through which to view the film: a glimpse of a coming-of-age tale about authority and morality, about what is right and what ought to happen versus the uncontrollable nature of reality and the sometimes-successful efforts taken to try to assert control. – Forrest Cardamenis 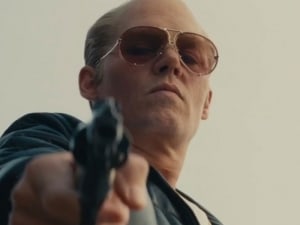 Florid costumes and hours spent in the makeup chair have more or less become Johnny Depp’s M.O. He took a break from that with the cheesy Transcendence and disastrous Mortdecai of late, but with more Pirates and Alice on the horizon, Depp was back to drastic physical alteration in Black Mass. But gone (for one movie anyway) are the whimsy and eccentricity, replaced by a seething vengeance and frightening apex-predator prowess as Depp embodies infamous Boston mob boss James “Whitey” Bulger to chilling effect.

Depp’s white-knuckled turn as Bulger—the Irish-American whose crimes and notoriety rose to such heights that he was at one point second on the FBI’s Most Wanted list behind Osama bin Laden—involved far more than popping in some blue contact lenses and snapping on a partial bald cap. While the physical transformation is in itself stunning, Depp’s onscreen presence is stark and menacing and serves as a brilliant reminder that Depp has some serious and unnerving acting chops when he chooses to employ them. While Black Mass as a whole doesn’t get especially imaginative with its storytelling (with more emphasis on hitting all the bullet points of Whitey’s criminal reign rather than fleshing out the many characters involved), Depp’s performance ensures that we can’t take our eyes off Whitey whenever he’s on screen. Depp’s Whitey is intensely focused, unimaginably vengeful and wildly fun to watch. Bulger was a man with nearly impenetrable control over other people, and Depp likewise dominates each and every scene. – Josh Goller 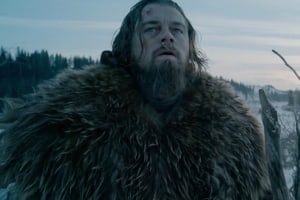 Leonardo DiCaprio in The Revenant

I am now firmly convinced that Leonardo DiCaprio is one of the finest actors of his generation. When he broke out with films such as Romeo + Juliet and Titanic in the ‘90s, I wrote him off as nothing more than a pretty boy enfant terrible. Yes, he gave an excellent performance in What’s Eating Gilbert Grape, but I just wasn’t convinced.

After taking part in what could be considered a residency with Martin Scorsese (five films and counting), DiCaprio began to take on riskier, less glamorous roles. His turn as Calvin J. Candie in Tarantino’s Django Unchained is a deliciously subverted take on the dandy antebellum plantation owner, while his turn as scumbag stock broker Jordan Belfort in The Wolf of Wall Street proved that DiCaprio could do physical comedy.

Physical is the best way to describe his turn as 17th century fur trapper Hugh Glass in Alejandro G. Iñárritu’s The Revenant. Left for dead by his friends after being mauled by a bear, Glass begins the arduous journey of exacting his revenge, all the while suffering from a host of traumatic injuries and fending off Indian attacks. DiCaprio loses himself in the role of Glass, a man who has known his fair share of suffering. DiCaprio has been up for five Oscars, whiffing on all of them (unfairly for Wolf). If there is any justice in this world, Glass will not only get his revenge in The Revenant but DiCaprio will walk away with one of those long-coveted golden statues. – David Harris