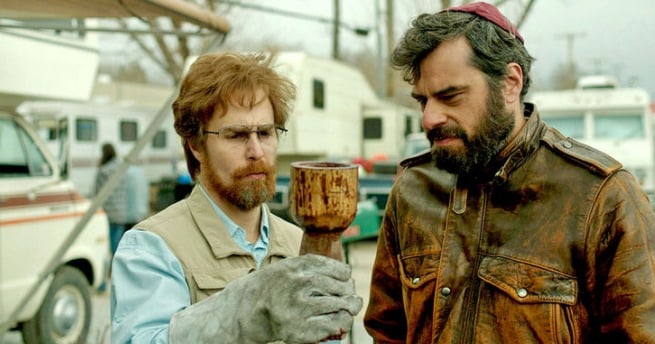 Don Verdean may come from a familiar milieu, but it’s one for which the film shows little affection.

Those of us who enjoy Napoleon Dynamite can still recognize it as a fluke. Even without the supporting evidence of Nacho Libre and Gentlemen Broncos—two rather dismal efforts unmistakably made by the same hands—Jared and Jerusha Hess’ debut succeeds not so much out of prowess but from a lucky combination of elements. It is something of a miracle that they are still making films 10 years later, but with a fifth film, Masterminds, already in the can, here comes number four, the inoffensive-to-a-fault, putatively satirical Don Verdean.

One of the most interesting things about Napoleon Dynamite is how much it is inflected by its creators’ (Mormonism) without being explicit about it. Initially, Don Verdean is intriguing for the very reason that for the first time, the Hesses have taken on religious credulity as their subject. Unfortunately, they’re hesitant to explore the theme with any bite. When they do poke fun at the devout, it’s rarely for anything more insidious than bumpkinish zealotry. Not withstanding the blatant female-subjugation of a hymn sung by the flock led by Pastor Tony Lazarus’ (Danny McBride), the film never has the courage to show religious hypocrisy at its worst—and even this example is far too silly and facile to count for much.

And then you have our eponymous protagonist, Don Verdean, played by Sam Rockwell in full beard and aren’t-these-dorky double-bridge glasses. Don is a huckster of the highest order, and one can imagine the fun someone like George S. Kaufman might have had following him on his exploits. But the film endows him with altruistic intentions without ever truly exploiting this central irony. It seems the Hesses are simply nice people, too nice to be halfway decent satirists. The only reason Don, an archaeologist specializing in Biblical artifacts, stoops to forgery is because he believes that evidence of the “Good Book”’s veracity will lead more people into Heaven. Again, it’s not a bad premise for a satire, but the film’s approach is far too mild.

There is one somewhat amusing set-piece in which Don and his Israeli co-conspirator Boaz (played annoyingly by Jemaine Clement) play out an obviously faked discovery for their Chinese benefactor, who nonetheless believes in it the entire time. But while Don at one point asks Boaz, “How stupid is this guy,” the real question is how stupid the audience will believe these characters are. This is where the film becomes mean-spirited. Don’s sweet assistant Carol (the always great Amy Ryan) isn’t in on the hoax, and her gullibility, her tendency toward willy-nilly confirmation bias, while not exactly played for laughs, can’t help but be viewed with condescension regardless of the film’s intentions. Napoleon Dynamite has been criticized for exhibiting the same attitude toward its characters, but that film is so clearly the work of people who really know its milieu first hand and have tremendous affection for it. Don Verdean may come from a familiar milieu, but it’s one for which the film shows little affection.