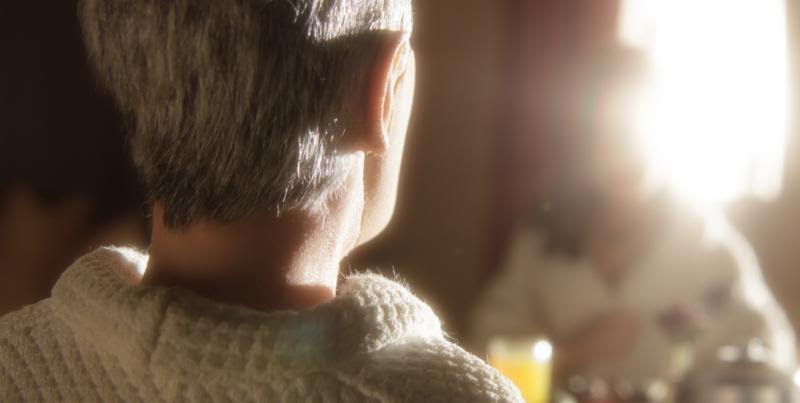 The longtime aficionado of Kaufman’s work might suspect there’s more up his sleeve, only to find themselves disappointed.

In today’s cinematic landscape very few screenwriters have made themselves brands quite the way Charlie Kaufman has. There’s Aaron Sorkin with his hypercommunicative liberal super-people. Quentin Tarantino’s pop culturally obsessed rogues. But even megastars like them suffer from a level of fatigue that Academy voters seem to have expressed by shutting both Steve Jobs and Hateful Eight out of the writing categories. Kaufman’s brand is more critic-proof because his personal style is less recognizable than his specific dedication to invention. From Eternal Sunshine to his own directorial debut Synecdoche, NY, Kaufman’s writing is stuffed to the brim with off-kilter ideas so plentiful that some end up cast aside as background fodder. On a surface level, the reliably meta-through line of his work might stand out more immediately, but it’s that singular approach to basic human drama refracted through the prism of his unique perspective that makes his stories endure.

His latest, Anomalisa, co-directed with animator Duke Johnson, is something of a departure from his usual architecture. Adapted from a radio play, the film’s short, efficient running length unfolds in something not far from real time. The cast is tight and the premise is deceptively simple. It’s a dark comedy so bleak as to be hilariously maudlin. Kaufman’s work always splits the difference between laughter and depression, but Anomalisa taints every sliver of humor with a stain of sadness all the while its more pathos-ridden observations are legitimately funny in a jaundiced sort of way. David Thewlis voices Michael Stone, the author of a self help book geared toward the world of customer service. He’s an authority on the minutiae of interacting with people in transactional situations, but in his real life he is cartoonishly weary.

The film’s opening follows him from a flight to the hotel hosting the conference he’s to speak at, forcing us through the marathon of excruciating pleasantries he’s tasked with enduring. Michael sits through a phone call with his wife and their son, all the while sounding like a man being solicited with leaflets walking down the street. Thewlis’ English timbre registers as soft—warm even—but perpetually tinged with the kind of dissatisfaction reserved for waiting in line at the DMV. He’s decidedly fed up with seemingly everything around him. At first you could be forgiven for assuming he’s just jetlagged, or has had a bad day, but as the film progresses it’s possible all of his days have been bad ones and air travel just hasn’t helped matters any.

Michael’s principle arc in this narrative is the quest for extramarital nookie, a search for strange that feels icky and ill-advised from jump street. Often films that want you to sympathize with a middle-aged man’s thirst for infidelity take the time to sell you on how dissatisfied he is with married life, but Anomalisa only offers us this late night snapshot of Michael. First, he phones an ex in the area, then slowly graduates to leveraging his pseudo celebrity status upon two of the conference’s attendants, one of whom is Lisa (voiced by Jennifer Jason Leigh), an unassuming call center employee who stands out to Michael. The entire affair has a pedestrian tone that, in a low budget, live action feature, might read as cloying. However, bringing this script to life using stop motion animation adds a mileage real humans could not.

The desired effect is twofold. The animation is so smooth and subtle that you often stop actively analyzing the frame as an animated one. The figures are designed to scale and are realistic without pushing deep into the uncanny valley. This dissociation from the body engenders a focus on the spoken word, the intricacies of vocal delivery and intonation. Its origins as a radio play make sense, but it’s the specific payoff of that focus on sound that provides the hardest punch Anomalisa packs. Without giving too much away, background player Tom Noonan’s tender, mutable extra work lays the foundation for one very shattering moment at the apex of the Michael/Lisa dalliance. It’s a dramatic climax so powerful it might as well smash-cut to a directorial credit. Kaufman and Johnson artfully erect a world of fantasy so enticing that its inevitable destruction is devastating on a deep, scarring level.

The only issue is that the technique that makes this moment possible is telegraphed pretty hard if you’re even passively looking for it. It’s a smart, effective film with one really strong trick up its sleeve, where Kaufman’s better work tends to be a Rube Goldberg machine of concentric cinematic devices. In a career full of boundary redefining works, rich and dense with complexity and detail, a simple film about the dangers of dissociating from reality for projected fantasy begins to feel basic to a fault. The casual viewer may not find the film lacking, but the longtime aficionado of Kaufman’s work might suspect there’s more up his sleeve, only to find themselves disappointed.