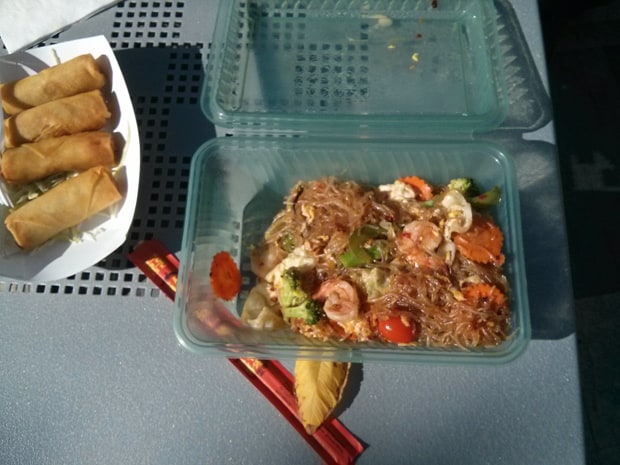 Synopsis: Its name is accurate: a somewhat dialed-in but fairly flat experience. This is yet another dime-a-dozen Thai food carts. There is nothing special about this cart. It has the typical menu you’ll find at any Thai restaurant in Portland (save for the adventurous street-food restaurants), and it was fine.
We ended up with the glass noodle special with shrimp ($8 for shrimp, $7 for chicken or veggies) and the panang curry (same prices). We ordered it spicy. It wasn’t. To round out our price limit, we opted for the $4 golden rolls, accompanied by a house-made sauce and include veggies and glass noodles. Our total was $19.

The glass noodle menu item was okay; the panang curry was typical, meaning it was pretty good. Nothing was spicy. Nothing was amazing. It was… food. And then we had the golden rolls, which were reminiscent of a deep-fried Costco purchase. There were no glass noodles; it wasn’t home-made, and there was no sauce. That sort of sealed the deal as a less-than-stellar experience.

Time: Like a factory is wont to do, we got our food in under eight minutes. NOTE: We’re eating later now (starting at 1 PM) so we’re missing much of the lunch rush now.

Value-2: You can get $7 noodles at a Thai restaurant around the corner. It will be better by a smaller margin.

Gut check at 3pm: I wasn’t hungry. But it was two hours ago. Still, I didn’t have dinner until much later than 6, so it stuck with me.

Sustainability-2: They used Go Box. I’m sure everything else followed the fuck-it-buy-cheap ethic of purchase.

Fear Factor-3: While the cart is clean, it’s also called a “food factory,” which is a bit off-putting. Nothing else was really scary.

Staying Power-2: It’s nondescript. But it’s been around for almost five years. So, we’re not going to rule it out. But we also don’t see any reason why it should stay. It’s just… ho hum.

Creativity-1: [Robot voice] WELCOME TO THAI FOOD FACTORY WHERE WE SERVE ALL THE THINGS THAT EVERYONE ELSE SERVES. 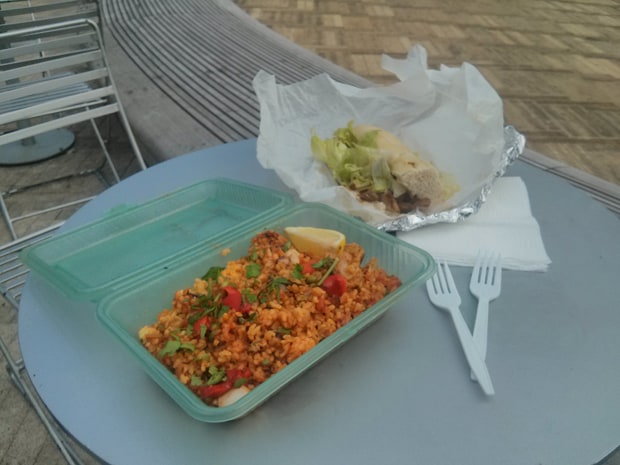 La Camel serves Moroccan food with a pan-Mediterranean twist. Many times, I’ve been to a Moroccan restaurant just to have filo dough, powdered sugar and ground chicken in multiple permutations. La Camel is different. They sport Moroccan-meat-filled sandwiches ($7.75–8.75), tajine dishes ($8.75–9.75), a variety of sides (tea, coffee, green salad ($2.50–-$3.75)), a beautiful-looking lamb shank (for a budget-busting $12)—and paella ($8.50–9), the Spanish classic of consisting of rice, broth, saffron and seafood.

We opted for the lamb sandwich and the seafood paella. We were glad we did. The paella was high quality, and had shrimp, scallop, clams, mussels and squid in it. They skimped nowhere and it was a deal at $9, as most restaurants will charge you at least twice this amount for the same portion. The lamb in the sandwich was delicious, but the bread was a bit plain and the lettuce was iceberg. The olives were a nice addition, though, adding a hint of the vegetal bitterness to an otherwise boring meat/bread/lettuce sandwich.

Time: It took us approximately eight minutes to get our meal. We finished the meal within 25 minutes of ordering.

Value-3: This isn’t the cheapest cart you find, but for the quality of the food and the preparations we got, we felt we got a solid value.

Gut check at 3pm: We weren’t super stuffed upon finishing our meal, and felt that a snack may be in order. In reality, I was actually good until dinner, which surprised me.

Sustainability-2: They get a point for using Go Box, but I didn’t see any other indicators that the meat or produces considered sustainability. They served plenty of beef (kefta) which is terrible for the planet, as well as lamb, chicken and the local fish option of salmon (a meat-eating fish, so you can’t even win there).

Fear Factor-4: To be frank, most people are unfamiliar with Moroccan food. Weird words like ‘tajine’ may freak out the normal eater (it’s a little clay pot that is put in the oven; it keeps things moist. Try it!). But other than that, the cart is cute, decorated nicely and looks very clean from the outside. You can tell the proprietor takes pride in his work and cart.

Staying Power-2: The Moroccan experience is usually punctuated with the whole experience of sitting on the floor and having ritualistic handwashing and belly dancers. This cart, obviously, lacks this experience (and the requisite premium in food price). If we had it our way, this place would thrive and kick major ass.

But there’s a problem here that is no fault of the cart itself: it’s his neighbors. There are at least eight Middle Eastern food carts around this pod, and three of them are on this street. Our worry about staying power has nothing to do with the quality and offerings of the cart. Our worry has to do with dilution of the brand and the difficulty in distinguishing one’s self from the dime-a-dozen, gyro-slinging, phone-it-in carts around La Camel. Moroccan food is North African, not Middle Eastern. But our culturally- and geographically challenged populace probably doesn’t care about that.

But they should. Because Florida and Arizona offer very different cuisines; the same goes for Egypt and Morocco.

Creativity-4: Adding really good paella and switching up the sandwich idea affords La Camel some props in the creativity department. Good work on the olives in that sandwich: seriously. 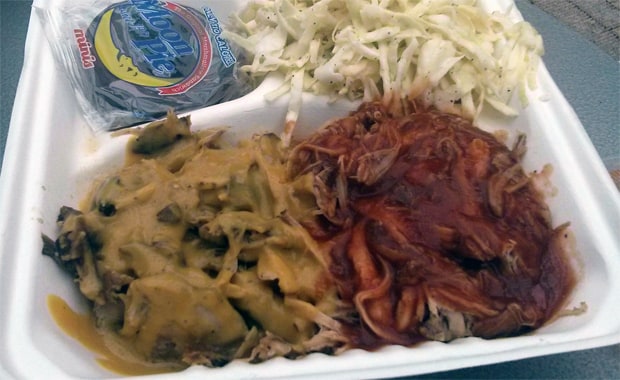 We weren’t excited to come here. Both of us had previously been here and we were underwhelmed. But we got the mixed platter ($10) of pulled pork, pulled chicken with our sauce choices and we were pleasantly surprised. The meat was juicy, the sauce was sweet or tangy, the sides were delicious. One of them, the Brunswick stew, was a tad smokey and beany. Coleslaw is easy to screw up: there’s a balance to be had here and so many people add too much mayo or sugar. They didn’t screw it up. At all. Bravo.

Our only gripe was that at $10 per platter, we had no room in our budget to try the banana pudding (which looked so good!). Oh, wait, there was a second gripe: included was a moon pie. Wrapped in plastic (my peeve is showing) this little sweet treat tastes like a candle dunked in sugar water. No thank you. It left me with a poor taste in my mouth after having all that delicious, tangy-sauced, juicy meat and sauce.

Time: We received our order in under 10 minutes; we were done with our meal in a tad over 30 minutes. The cart attendant was friendly enough and was able to explain everything on the menu when we had questions.

Value-3: Barbecue isn’t cheap; we know that. This is on par with what we’d expect. $10 for a mess of food isn’t too shabby, but isn’t a deal by any means.

Gut check at 3pm: Not hungry all afternoon. Yay!

Sustainability-2: Go Box containers were available; this time he forgot to use it, but it happens. The containers they normally use are the (actually) compostable paper kind. Not a lot of trash at the end of the meal. Of course, the plastic forks…

Fear Factor-2: Barbecue is frightening to vegetarians and vegans. Other than that, the moon pie boosts this a point. The cart is tidy, put together, and in no way off-putting.

Staying Power-3: Of course, this is up to the market, but the improvement from our last trips warrant us pointing out that this was solid, it was tasty, and that the place has been in business for several years. They have a decent location on the pod, and the smells coming out of it draw you close.

Creativity-2: There’s not a lot to be creative with here: it’s North Carolina-style barbecue. The fact that it isn’t KC or Texas style is a bit different. But it’s meat, friends. Not a lot of creative expression here. And that’s fine, isn’t it?