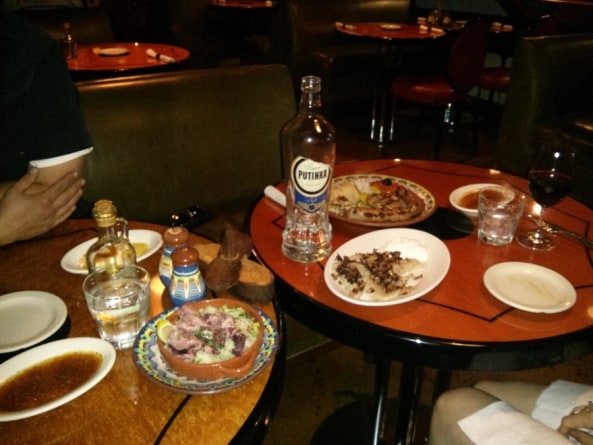 Forte would stack up to any restaurant in Portland.

“The address is 4180 Rainbow Boulevard, but I don’t see any suite numbers. Let’s try this place.” We pull into a parking lot, which is shockingly full for not really having much in it. There is a large discount liquor store and a low-slung set of non-descript businesses ranging from a restaurant to Latino groceries. A short-fence awkwardly defines patio from sidewalk. “Forte! This is it.”

From the outside, it looks like a crappy Mexican restaurant, with shades drawn and a couple of neon signs; a bull emblazons the front door (See it for yourself). The advertisements in the window make it look somewhat like a nail salon.

We walk in to a lavishly decorated room with art, quaint booths and tables and a large bar. The server was quick to seat us into a relaxing corner. The menu was an equally pleasing surprise, incorporating a pan-south-and-eastern-European panoply: everything from the Catalonian classic pan con tomate, to the wondrous Georgian kachapurri (a must have) to the Russian pelmini. A wide breadth of Europe was represented in their not-overly-complex menu (it was sectioned well enough to not be confused).

The three of us settled in, got a drink and continued our conversation about the transplant culture shock of a webfoot Oregonian to Las Vegas. My wife and I were visiting for a conference, and our host was a Portlander. Caught up in conversation, when the wait-staff returned, we weren’t even ready to order yet.

“I’m impressed with the variety, honestly. I wonder if they can pull it all off,” I quipped.

After some mental digestion, we came to a conclusion: The kachapurri ($8.50), the veriniki (a Russian dumpling filled with potatoes and onions served with sour cream) ($8.50), octopus in olive oil ($9) and the mixed Bulgarian grill ($11)—which sported a variety of sausages from Bulgaria, an area of Europe that is not usually highlighted for its culinary tradition. That dish was also featured on the douche-tastic “Diners, Drive-ins and Dives” TV program, which isn’t exactly a selling point for us, but I suppose it works for tourists? Considering the time of day and our plans for the night (to head to Fremont and drink it up), we skipped the hard alcohol in lieu of beer and wine.

We poured our water from a re-purposed Russian vodka bottle and endured the clash in atmosphere from the four-on-the-floor thump of Eastern European club music. We snacked on bread and olive oil, provided with a dash of their home-made spice mixture. We continued our conversation and contrasted our living situations and environments.

After about 15 minutes, our order came out en masse. There wasn’t a miss in the whole order: the sausages were flavorful and hot; the octopus was incredibly tender (“Almost like butter in my mouth!”); the dumplings were tremendously savory. The crisp-fried onions were a wonderful texture balance and added a savory sweetness to the pillowy ,creamy textures prevalent in this dish. The kachapurri was a work of art: home-made bread wrapped farmer’s cheese and a raw egg was set atop to cook with the heat. Tangy, creamy, delicious.

After trying this out, our host was sold. “This is great!” Coming from a Portlander, that’s a tall order—we are famous for our food-haughtiness. But he’s right; Forte would stack up to any restaurant in Portland. It’s a bit quirky, as you’d expect from anything tinged with Eastern Europe, and it seemed at first like they were taking on too much, but they know what they’re doing. And under $40 for three people ($60 with drinks, tip and tax, I suppose) is a great value, as well.

If we ever go back to Las Vegas, we would definitely return here and mine the rest of the menu: the bacon-wrapped dates ($6) and the whole “Silence of the Lambs” section of the menu looked intriguing. Service was informative, but not overbearing. And the whole meal was just paced right.

We left after paying our bill, and I noticed on the way out a tiny refrigerator sporting the locally made sausages, baked goods and desserts. If flying weren’t such a hassle, I would have picked up a few. “Thanks!” we waved as we exited into the blinding light of the sun and into the air-conditioned arms of the liquor store next door.

It is Las Vegas, after all…