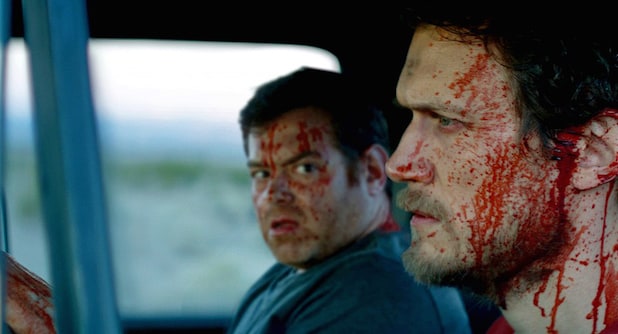 Southbound offers a hearty serving of the creeps from start to finish.

Perilous is the road to a successful horror anthology. Tying together divergent stories with a common thread is no easy task, especially when a number of directors each helm different parts of the whole. The ABCs of Death used the theme of a gory alphabet for its 26 brief stories, but it landed with a thud due to the inconsistency that so often plagues the anthology approach (surprisingly, its sequel was far better received by critics if not audiences). The V/H/S films have seen slightly more success with a found footage conceit, but they’re still rickety. Trick ‘r Treat may be the most successful recent horror anthology, relying on the can’t-miss theme of Halloween legends and staying cohesive by employing a lone writer-director for its various horror-comedy tales. You’d have to go back to the Stephen King/George A. Romero collaboration Creepshow (1982), with its pulpy comic book theme and big-name stars, to find a truly enduring horror anthology—and even that was uneven.

Enter Southbound. This nifty little five-story film revolves around a sinister patch of desert highway in Nowheresville, USA. Ironic fates abound, and despite ample gore, the true terror in these stories rests in the psychological and the metaphysical. If “The Twilight Zone” and “Tales from the Crypt” had a baby, it would look something like Southbound. Cell phone service is patchy on this accursed stretch of road, and if you manage to get a hold of a 911 operator, there’s a hint of malevolence in their tone. Good Samaritans secretly practice regenerative rites of the occult. Shape-shifting townies skulk around dive bars. Otherworldly hospitals stand hollow and abandoned. Winged death angels hover ominously over sagebrush-choked wasteland.

Southbound succeeds by effectively interlocking its tales. When two blood-stained men try to outrun a demonic force, they keep passing the same gas station as if trapped in a continuous loop. One winds up suffering an ironic fate in an inescapable fun-house of a motel room, and the camera pans from one room to its neighbor, where our next tale begins. An all-girl band suffers a tire blowout along the desolate road and is fed some charred mystery meat at a creepy dinner party. When the vegetarian of the bunch runs away from the ensuing sinister fallout, she flags down a passing driver in the dead of night, thereby launching our next story, which involves a trip to that abandoned hospital. And so on. Ultimately, the first and fifth stories (both directed by collaborative group Radio Silence) complete the circle like a snake eating its own tail.

With the pervasive sense of no escape, Southbound cultivates a heady and profound atmosphere of dread. The horror involves plenty of blood, snapped bones, brutal shootings and stabbings, men in creepy masks and hellish monsters, but it’s the unique and inexplicable ways in which the various characters find themselves trapped that really makes the skin crawl. While there are peaks and valleys, as one would expect from five stories with four different directing credits (three of whom had some level of involvement with V/H/S), Southbound is the rare anthology that stays tonally consistent and effective throughout. Without a dud in the bunch, Southbound offers a hearty serving of the creeps from start to finish, all taking place around a ghoulish stretch of road that’s worth revisiting again and again.