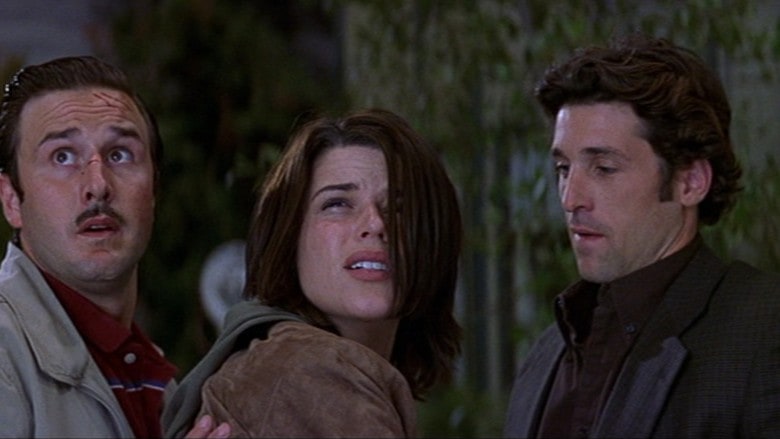 Scream 3 hews too closely to the Scary Movie franchise erected to mock it.

Wes Craven is most known for fathering the Nightmare On Elm Street franchise, but he personally directed twice as many Scream films, which is about half as many as he should have made if you’ve ever sat through Scream 3 or Scream 4. The first film was a clever reinvention of the slasher film as a postmodern whodunit, and the second entry in the series progressed the themes admirably while amping up the thrills, but this third outing, designed as the closing chapter of a trilogy, is a masterclass in diminishing returns.

Following in the footsteps of New Nightmare, Scream 3 largely takes place in Hollywood, surrounding the production of a film called Stab 3, the in-universe film franchise that dramatizes the Woodsboro homicides. The Holy Trinity of Sidney (Neve Campbell), Dewey (David Arquette), and Gale (Courtney Cox) return as the leads, but the overcooked script doesn’t give any of them enough of an arc or much to do beyond dryly relive dramatic beats that were far better executed in the previous films. There is a slew of new characters as well, each fighting for screen-time and relevance. You’ve got Patrick Dempsey as Detective Mark Kincaid, who fills what could have been a new love interest for Sidney (in the vein of Scream 2’s Jerry O’Connell) had the filmmakers not wisely moved her away from romance. Pre-Anti-Vaxxer Jenny McCarthy, pre-gravitas Emily Mortimer and post-Felicity Scott Foley are here as well, as two actresses in the fictional film and the film’s director, respectively. The entire structure is a bit of a shoddy mess, but Parker Posey steals the show as Jennifer Jolie, the starlet playing Gale in the Stab movies.

The Scream films have always blended knowing, winking humor with a maudlin surfeit of grisly violence, but this third chapter trades in cleverer-than-thou cinema trivia asides for tenuously laughable meta-banter that shatters the aesthetic distance without offering up anything resembling substantive observations. The first films found very intriguing things to say about the slasher genre’s gender politics, and repurposed the rhythms of Agatha Christie-esque mystery tropes to ensure the proceedings moved along at an invigorating clip. Here, however, it’s clear that constant, restrictive revisions hindered the narrative from achieving much more than coherence. Everything hangs together somewhat functionally, like a model kit with all the pieces glued together just so, but not with any of the idiosyncrasy to make it come alive.

Some of this is obviously Craven’s fault, who seemed to think the only thing that mattered about Scream was people getting extravagantly eviscerated. Sure, the kills deliver for the most part, but the in-between moments don’t sing like they used to, and much of that blame rests on Ehren Kruger’s shoulders, here replacing original scribe Kevin Williamson. It’s not like Williamson is some sacred cow whose voice and tics are impossible to replicate, but there’s an assembly line nature to the way Kruger employs those usual tricks that feels like an off-brand knockoff. The self-aware cinephile jokes get traded in for these fourth wall breaking gags that feel more like Family Guy than the Tarantino lineage of the earlier films. Jamie Kennedy’s slain Randy Meeks returns in a pre-recorded video (a narrative device that feels less like fan service than the writer having to reverse engineer thematic resonance). Carrie Fisher shows up as a doppelganger for herself. Hell, even Jay and Silent Bob make an appearance on the Dimension Studios lot. There’s a difference between being self reflexive and just plain nauseating, and this film completely misses the former.

Some of the new wrinkles to the film’s then well-worn format were welcome additions, like the Ghostface killer having a modulator that mimics the voices of other primary characters, giving extra layers to the film’s many red herrings. The revealed killer ultimately isn’t as compelling as Timothy Olyphant’s freaky Tarantino film student from Scream 2, but his motivation wraps back around to the first film in a surprisingly satisfying way. Similarly, though Sidney isn’t given much to work with as the perpetual Final Girl, her new life as a secluded crisis counselor shows depth and growth that movies like this usually aren’t capable of. These little pockets of decency are pleasant, but the rest of the film hews too closely to the Scary Movie franchise erected to mock it.

The absolute zenith of this motif occurs somewhere in the second act, a galactically stupid scene where the killer is faxing precognitive script pages to the group of prospective victims while they panic in a darkened room. This sequence ends with the house exploding. It’s a fine metaphor for the reluctant mess this movie can’t escape becoming.