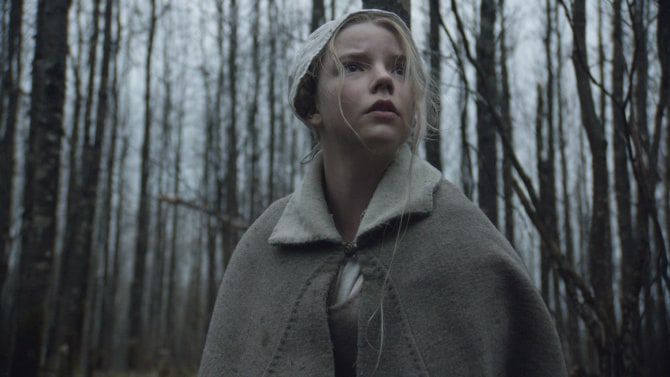 The Witch aims for an engrossing, period appropriate realism that only deepens the psychological burden on the audience.

Watching the 17th century Puritan family at the heart of The Witch tear each other apart, it’s hard not to consider all the technophobic memes your computer illiterate aunts and uncles are likely to share on their Facebook pages. You know the ones. Accusatory screeds about cell phones and the internet tearing the modern family apart. No one listens to each other. No one talks to each other anymore! Well, here’s a familial unit unencumbered by such futuristic distractions, and the only thing they’re left with us the haunting specter of their own sin and a bunch of fucking goats.

Going into The Witch expecting a straightforward fright film, it’s easy to feel ambushed by the restrained, deliberate style. Characters speak in a very specific, irritating dialect (seemingly apologized for in a chyron immediately after the final director credit) somewhere between iambic pentameter and the more dense passages of “Game of Thrones” dialogue. This choice forces the viewer to really pay attention to speech, parsing it for the relatively simple exposition family members impart to one another, as well as the duplicitous misdirection obscured amid those pleasantries. The performances are muted and functional, not unlike a really good community playhouse version of The Crucible arranged by, say, Neil LaBute.

William (Ralph Ineson) fundamentally disagrees with the establishment of a New England plantation and what he perceives to be their inferior morality, so he moves his family out to the middle of nowhere to start their own farm. Their youngest child, a baby, is mysteriously taken one afternoon, leaving a gaping maw at the center of their home into which every minor squabble is fed as dark nourishment for their demise. William’s wife, Katherine (Kate Dickie), comes completely unglued, lashing out all of her frustration at their eldest daughter Thomasin (Anya Taylor-Joy), the closest figure this film has to a lead.

More than anyone else in their family, Thomasin struggles with her faith. She unintentionally beguiles her younger brother Caleb (Harvey Scrimshaw), and is constantly at odds with their baby brother and sister, who are impossible to wrangle at their rambunctious age. The crops are weak and there’s not enough of anything to barter for food, so within this lack, small allegiances are formed around petty secrets. William and Caleb share a bond over venturing into the woods together after William has sold his wife’s prized silver cup. Thomasin and Caleb develop an adolescent, conspiratorial closeness. Everyone subconsciously blames the others’ moral failings for the horrid luck that’s fallen over their house, but no one wants to look inward to their own weakness.

There is a witch hiding out there in the woods, but her existence on the periphery of the tale seems perfunctory at best. Even stripped of traditional supernatural elements, this is a movie that explores some murky emotional territory. This is a real slow burn, one that sits with these characters and makes you watch the knife twist again and again before it finally pulls the blade out and lets the blood gush everywhere. While the film’s later sequences—those that finally indulge in the orgiastic thrill of Wiccan iconography—are a satisfying blast, the real magic is in the build. Other recent horror films have followed this structure to a T (The House of The Devil comes to mind), but where many of those films leaned on homage and pastiche, The Witch aims for an engrossing, period appropriate realism that only deepens the psychological burden on the audience.

The imagery of witchcraft and the looming threat of Satan’s desire feel like metaphors for a freedom of self not afforded to a puritanical devotion to a higher power. William puts his life and that of his family into the hands of God and is seemingly punished at every turn for minor infractions of faith, but Thomasin is offered considerably more for the Faustian bargain placed before her in the film’s heart-stopping climax. There’s palpable catharsis in the film’s incendiary closing moments, but again, that legitimate genre blow off, while earned, doesn’t quite match the ponderous, pleading tone the family’s journey maintains up to that point. No amount of artfully sequenced jump scares can match the churning dread of calling a higher power on the hotline and repeatedly getting a busy signal.