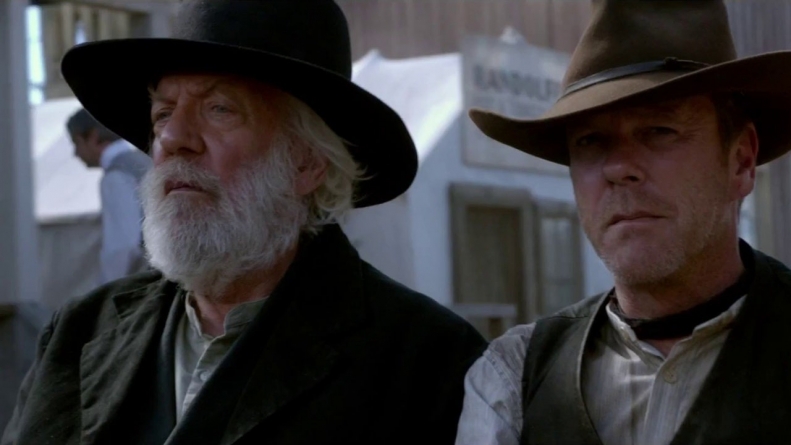 By relying on uninspired Western tropes over true grit, Forsaken is forgettable.

Last year, the Western genre received a shot in the arm from ultraviolent films like The Hateful Eight and Bone Tomahawk. Despite the severity of its title (which perhaps hews too closely to Unforgiven for its own good), the less ambitious Forsaken is not cut from the same blood-soaked cloth. Cast with a bevy of aging notables doing their damndest to wring something resonant out of a stiff and dusty script, Forsaken trots down the well-worn path of the gunslinger Western. Hinging on the newfound turn-the-other-cheek restraint of its previously trigger-happy protagonist, the film is a prodigal son tale that gets kind of murky with God stuff, unrequited love, awkwardly choreographed violence and half-baked redemption.

When notorious gunfighter John Henry Clayton (Kiefer Sutherland) returns home to a small Wyoming town after more than a decade of unsavory living, he’s met with a cold shoulder from his father, Reverend Clayton (Donald Sutherland). Since he’d last set foot at the ole homestead, John Henry’s mother has passed away, and his father resents him for not having visited since fighting in the Civil War over a decade prior. Understandably for the town’s preacher, Reverend Clayton is also ashamed of his son’s outlaw ways, and the majority of the film’s tension lies in their butting heads. The tension afflicting the entire town comes in the form of a gang of ruffians who bully townsfolk into selling their land to corrupt kingpin James McCurdy (Brian Cox). Aware of his quick-draw legend, the gang taunts John Henry every chance they get, exploiting the fact that he’s disavowed gunplay and no longer carries a piece on him. And all the while, John Henry’s former passion for Mary-Alice (Demi Moore), who has married and given birth during his decade absence, simmers on the backburner.

If those plot points sound vaguely familiar, it’s because nothing in Forsaken is completely original. There’s some novelty in seeing the white-maned Donald Sutherland and a perpetually stubble-faced Kiefer play a father-son duo onscreen, a first for them. The two give it a solid effort, stirring up what emotion they can from a weak script. But much of the film feels like it could’ve been derived from a more violent version of “Dr. Quinn: Medicine Woman.” And perhaps that makes sense, considering that director Jon Cassar’s previous efforts have largely been on the small screen, most notably on the Kiefer Sutherland-starring “24.”

Forsaken boils down to a story about a quick-draw gunslinger who refuses to fight back until he doesn’t. Townsfolk routinely take a beating at the hands of the violent gang, a group of outlaws that all the while worries that John Henry’s legendary trigger finger will regain its itch. With the film’s first 80 minutes building up how great a fighter John Henry was, the poorly staged final showdown comes off as anticlimactic. Throughout the film, there’s talk about belief in God, regrets and shame, but it’s all so scripted that none of it seems the least bit poignant. Cassar’s TV background shows, as he too often relies on melodramatic close-ups. The tacked-on erstwhile romance plot doesn’t do Moore’s one-dimensional character any favors, and even the villainously talented character actor Michael Wincott is given too little to do. By relying on uninspired Western tropes over true grit, Forsaken is forgettable.