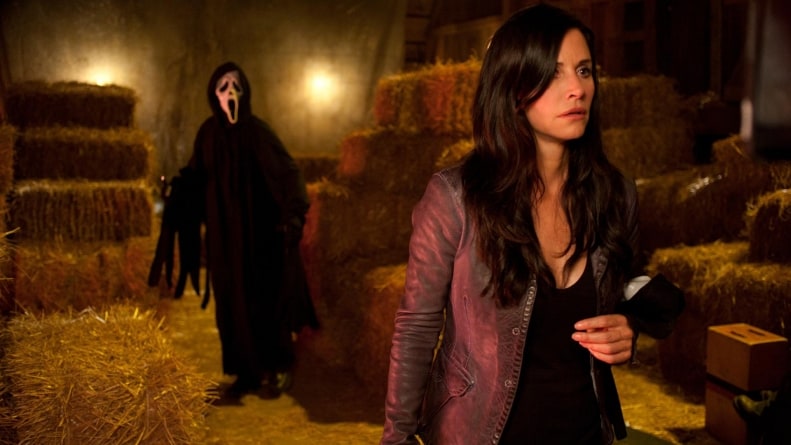 Scream 4 is a worthy enough consolation prize and far from an unfortunate punctuation mark on the horror master’s storied filmography.

A decade after the embarrassing tragedy that was Scream 3, Wes Craven teamed back up with original screenwriter Kevin Williamson to deliver the most unique entry into his infamous slasher franchise. It also happened to be the last feature he made before his death.

Scream 4 rhymes with the original film much the way The Force Awakens does with A New Hope. Just like the beloved Episode VII, this movie lets time pass in its universe as it has IRL, bringing us the original, aged trio from the old trilogy, Sidney (Neve Campbell), Gale (Courteney Cox) and Dewey (David Arquette), while introducing a slew of new characters that represent fresh spins on their classical counterparts. Sidney returns to Woodsboro to plug a triumphant memoir she’s written about her experiences from the first three films. Dewey has become the town’s sheriff. Gale is his wife, as Cox’s belabored Lois Lane Memorial Suit of Armor has grown a fresh coat of rust while stifled inside this small town hellhole. Somewhat conveniently, someone in a Ghostface mask begins hastily dispatching new victims, and we’re off to the races.

The new blood makes this more than the exercise in futility of the last installment. Emma Roberts leads as Jill, Sidney’s cousin and final girl heir apparent, with Hayden Panettiere from “Heroes” filling Rose McGowan’s role as her tough friend Kirby. Rory Culkin rounds out the new trinity as Charlie, a millennial take on Jamie Kennedy’s Randy character. There’s a whole host of other charming, young cast members, and they all execute their supporting roles with ruthless efficiency. Everyone is a little more idiosyncratic. Each new body possesses an equal amount of sincerity and cold calculation, providing an army of red herrings and potential suspects, something the last two films clunkily grasped for. Williamson (and rewrite extraordinaire Ehren Kruger) smartly bring back the feeling of the first film. It’s just attractive, mouthy know-it-all teens getting stabbed to death under accordance of slasher film morality laws.

Scream 3 was post-modern in a really gauche, nauseating way, but this iteration remembers that the charm in Scream is looking irony in the eye and making it bleed. The film opens with an Inception-esque nesting doll homage to the Scream opening sequence formula, spamming successive “film within a film” prologues from the Stab series that exists within the Scream universe. This opening set piece skewers the series’ fall from grace by propping it up against the Stab sequel straw men. Each subsection is littered with tongue-in-cheek critique of mainstream horror in the ‘00s, reminding you what you’ve been missing in the franchise’s absence. These movies are supposed to be fun and, at times, even funny, but the key to making this world work is taking the piss out of cleverer-than-thou cinephiles who think they’re too fucking smart to be scared. It’s not just Gen-X nostalgia for the sake of it. As Anna Paquin says in a perfect little cameo, “stick a fork in 1996, already.”

There are shades of another Kevin Williamson baby, Halloween: H20. Sidney Prescott has been allowed to age nearly the way original final girl Laurie Strode did in that film, and Neve Campbell is finally ready to step up to Jamie Lee Curtis status, standing up for herself and those around her in a way she just couldn’t in Scream 3. There’s a moment where she shields her younger cousin from seeing the mutilated corpse of her friend, and it plays a lot more powerfully than it should in a film this preoccupied with irony and John Carpenter references. Arquette and Cox hold their own rather well, largely preoccupied with a strange love triangle involving Marley Shelton as a young deputy with a crush on Dewey, but their arcs ran out of steam two films ago.

While no perfect world should have a legend like Wes Craven bow out with an unnecessary sequel, the master flexes his muscles something fierce here. Not quite the revival Red Eye offered, obviously, but there’s a monstrous pace and sharp eye at play that makes Scream 4 feel just as vital as the original film, only strengthened by a veteran’s ease with the form. There’s a set piece that modernizes the Randy monologues from the first two films and brings the newbies together with Sidney and Gale. It’s thick-cut slices of meta laid over one another like a blanket fort, with sharp editing and witty performances driving it forward. New rules are explained. Old films are referenced. No less than four subplots crisscross with ease of intent and readability. It all sets up a brilliant homage to the first film’s house party climax, here translated into a drunken movie marathon of all the Stab films, with the soused teens screaming dialogue at the screen like frat boys watching The Room for the tenth time. Both sequences play with POV and webcam video in a way that should ring trite but instead feels terrifyingly modern.

For the first 90 minutes, this is a perfect update of the original formula for a new generation. It’d be an ideal springboard for a brand new trilogy that would have felt as of the moment in 2011 as the original did in 1996. Sidney’s cousin Jill is the new lead in more ways than one, as she’s also revealed to be one of the two killers. Her diatribe about fame in the age of the internet and social media is more than a little on the nose, but Emma Roberts plays the role as the ultimate nightmare of youth. She falls somewhere between Rooney Mara in Side Effects and Adam Driver in While We’re Young, horrifying her elders as much for her absurd ambition and flexible morality as her bloodthirsty sociopathy. Book deal aside, Sidney refuses to utilize her pain and her trauma for cheap celebrity cachet, but her cousin is willing to kill everyone she knows if it’ll net her the life she feels she’s owed.

There’s an amazing moment in the third act reminiscent of the big reveal in Psycho where the audience’s allegiance is manipulated to shift. For a shining moment, it seems as though the old guard of the original trilogy will be left in the dust of the ‘90s where they belong and in their stead, we’ll be following a new franchise centered around this Twitter-loving murderess we’ll reluctantly identify with. It’s the second greatest achievement in the history of the series (behind a particularly heartbreaking kill in this film that still shatters on repeat viewings), but it’s all for naught. Sidney survives, as she does, and the opportunity for a brand new day disappears.

After a hideous misfire, Craven and Williamson came so close to making up for lost time. So close to snatching victory from the jaws of defeat. Four years later, we lost Wes Craven. You can’t help wondering what new permutations he might have put this series through as the world continued to change around him. Scream 4 is a worthy enough consolation prize and far from an unfortunate punctuation mark on the horror master’s storied filmography.