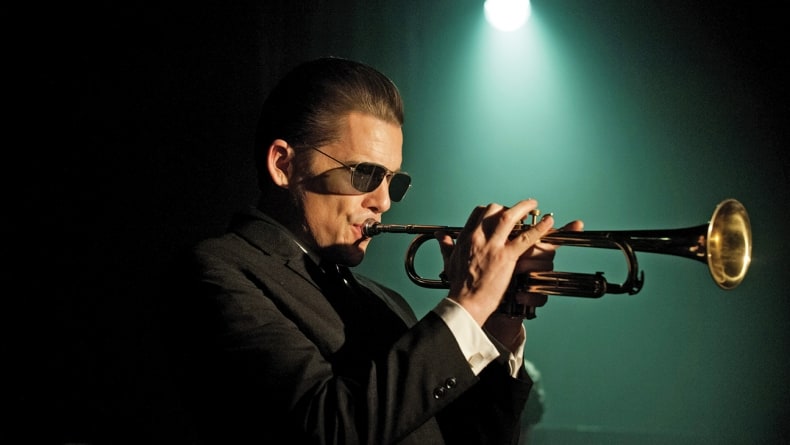 Born to Be Blue, in spite of its many strengths, isn’t particularly effective as biography.

Born to Be Blue Seth Katz

The history of jazz—America’s greatest art form—is haunted by the specter of heroin. It destroyed many of the greats like Charlie Parker and Billie Holiday; countless others, such as Miles Davis and John Coltrane, went through periods of addiction. Chet Baker, the trumpet player portrayed by Ethan Hawke in Born to Be Blue, was a key figure in what came to be known as cool jazz, a new development that started on the west coast. In the film, Baker is shown as the outsider he was: aside from not living in New York, Baker was white, and his popularity as a musician, bolstered by movie-star good looks, nettled many in the old guard. But while Baker took pride in his playing and had a competitive nature, his conflicting desire for approval from his forebears—Davis in particular—led him to try heroin for the first time, a decision that had profound consequences on the rest of his life.

At least, that’s the causal link writer-director Robert Budreau sets up, and it’s a narrative that (regardless of whether Baker’s drug use was actually triggered in this way) says a lot about the way jazz traditions are passed down from one generation to another. Bebop innovator Charlie Parker (“Bird”) is invoked with a hushed reverence in the film, and it’s hard not to think both of his tragic demise from heroin and the myth, which led many younger players down the primrose path of addiction, that his virtuosity was in some way related to his doping.

“Come back when you’ve lived a little,” Davis says condescendingly to Baker in the mid ’50’s after Baker’s first gig at Birdland, where they’re sharing a bill. Baker undoubtedly takes his words to heart.That’s one of two major events that happen right at the beginning of the film. The other occurs in the mid-1960’s, the film’s primary time period and an important period of transition in Chet Baker’s career. By now years into his drug addiction, he’s viciously beaten one night by drug dealers outside of a club, leaving his teeth and mouth—essential to the embouchure required to play the trumpet—in ruins. Subsequent, heart-wrenching scenes find Chet straining to produce a single note as strings of blood fall from the bell of his horn. Suggestions that he pick up a different instrument are firmly dismissed; this is a man who knows that he was put on earth to do one thing, and compromise is out of the question.

Baker’s difficult life has already been chronicled numerous times, most notably in the documentary Let’s Get Lost, but Born to Be Blue justifies its existence in several ways. Most notable is Ethan Hawke’s soulful performance. Hawke is undoubtedly an actor of skill, but charisma has always been one of his greatest assets, and his numerous collaborations with Richard Linklater, while felicitous, rarely push his boundaries. This film may be his first truly great performance—the first to prove that Hawke is a great actor, not merely an interesting one. His soft-spoken portrayal of Chet Baker is totally immersive without completely effacing the actor’s recognizable persona (it helps that he already looks a lot like Baker). Plus, his imitation of Baker’s singing voice rivals Matt Damon’s in The Talented Mr. Ripley.

Beyond that, the film gives Chet’s wife, Jane (who’s actually fictional, but is an amalgam of several real people), an authentic inner life rather than treating her as just another character orbiting around the tortured artist at the story’s center. Jane (Carmen Ejogo) first meets Chet while playing opposite him in an ill-fated film about his life. Budreau uses this as a clever device to parcel out information about Chet’s earlier life—for a few minutes, Born to Be Blue looks like it’s going to be a biopic about a biopic. But this also frames the relationship in an interesting way, as Jane is repeatedly compared to Chet’s ex-wife, whom she was portraying in the film. Throughout, her struggle to make it as an actress feels just as significant as Chet’s artistic struggle, even when the conflict between his drive to succeed and hers feels overly familiar.

Born to Be Blue, in spite of its many strengths, isn’t particularly effective as biography. Despite limiting the scope to a specific period in its subject’s life—a strategy employed by some of the most successful biopics of recent years—Budreau still touches on more areas of Baker’s life than can fully be explored in one film, especially one that runs just 97 minutes. The section that finds Chet returning home to Oklahoma—his parents are played by Janet-Laine Green and Stephen McHattie—could probably support a film of its own, as could his time living with Jane out of her van, and his stint playing with a small combo in a pizza restaurant as he recovers his technique. But the film hints at enough of the complex emotions underlying these chapters that they make one wish for expansion rather than excision. Where many biopics are overly ambitious and leave the audience begging for a narrower focus, Born to Be Blue’s refreshing modesty is a welcome change of pace.