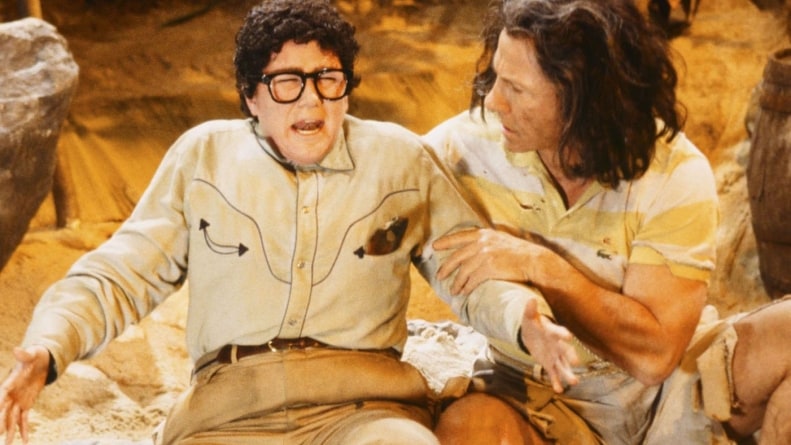 Even the Mark Mothersbaugh score sounds phoned in.

In 2016, most paperwork might still make us choose between “M” and “F,” but the fight for transgender rights has at least entered non-binary concepts of gender into mainstream circulation. This makes revisiting It’s Pat a strange experience. Now 22 years after its release, the speculation over the androgynous character’s “true” gender that structures the film and the “Saturday Night Live” sketches from whence it came now seems woefully retrograde.

But as any good armchair cultural critic knows, throwing out the passé baby with the #problematic bathwater doesn’t tend to get us anywhere beyond imagined moral high ground over the past. All popular culture is not created equal, nor is it “decoded” in all audiences the same way, as the late Stuart Hall famously reminded us. At the very least, It’s Pat could have something to tell us about a particular historical moment. At best, it might turn out to have a progressive edge over its competition.

Compare It’s Pat to Ace Ventura: Pet Detective, for example—also from 1994, also a major studio comedy with a star drawn from TV sketch comedy. The climactic revelation of Jim Carrey’s much-beloved starring debut is that the psychotic, disgraced former Miami Dolphin and suspect for the kidnapping of the team’s mascot was in the police’s midst all along, presenting as a female police officer played by Sean Young. In order to expose the officer’s identity, Ace tears her clothes off to reveal the lumps of male genitalia in her underwear. On cue, the gathered policemen collectively retch.

There’s more to this moment than just the sight gag of femme panties carrying a bulge. The Young character attempts to seduce Ace earlier in the film, and when he discovers her secret, he’s shown scrubbing himself vigorously. The policemen retching extends the joke, suggesting they, too, had surrendered to her advances.

Charitably we could say this is an overripe instance of yet another gay panic joke, one of the wheezier tropes of Hollywood slapstick in the ‘90s and 2000s. But considering their incommensurate disgust, we could just as easily say they’re repulsed at having touched a chick with a dick: As the attention to her breasts in the climax conveys, a penectomy was the only transition she hasn’t made. In this sense, Ace Ventura enlists hoary tropes of trans deviancy (cf. Dressed to Kill, Sleepaway Camp, The Silence of the Lambs) by which departure from one’s assigned sex is a form of deception, necessarily debunked by forced indecent exposure in the third act, like some sort of “Scooby Doo”-themed public humiliation porn.

Similarly, all the roads of It’s Pat lead into Pat’s (Julia Sweeney) pants, with the big difference that the “truth” keeps receding into the horizon. Indeed, the running gag across Pat’s 12 “SNL” skits, which ran from 1991 to 1993 across the 16th, 17th, and 18th seasons, is that Pat’s gender identity is persistently concealed by coy narration and an oblivious protagonist. Mundane interactions—getting a haircut, visiting the pharmacy, meeting new coworkers—escalate quickly as others become fixated on determining a gender for Pat, who inadvertently evades their queries with corny jokes and noncommittal responses. When Pat’s gender identity is revealed in the narrative world, a strategic cutaway blocks our view: Just as Pat makes their way to a gym’s locker room in one sketch, “SNL”’s faux-news “Weekend Update” interjects with a “special bulletin.”

What may seem like a one-dimensional gimmick, of the sort “SNL” specializes in milking bone dry, is in practice actually quite a good satirical device. Where Ace Ventura triumphs over transgender monstrosity, Pat triumphs, utterly by accident, over a world unable to function outside its rigid dichotomies. Because this is the late capitalist world of corporate diversity and sensitivity training, confusion by Pat’s gender ambiguity manifests not as persecution, but as politeness pushed to its absolute limit. Store clerks and service professionals struggle to avoid embarrassing Pat, while neighbors and coworkers tiptoe around personal questions. In the haircutting sketch, Pat delegates full authority to the stylist, who gropes for consumption preferences that might guide him towards one gendered hairstyle or another. In the film, Pat’s engagement to the similarly androgynous Chris (Dave Foley) draws a barrage of gendered gifts to see who will take what. In both cases, Pat finds a third way: When the stylist asks if they’d prefer to read Sports Illustrated or Glamour, Pat chooses People; When Pat and Chris receive lingerie, they declare in unison, “We’ll both enjoy this!”

The running gag, in short, becomes a taxonomy of the social production of gender, through which Pat’s blind, flawless navigation opens an imaginary space for opting out of gender entirely.

I’ve avoided discussing the film’s plot because there isn’t much to speak of, but insofar as there is, it concerns Pat’s new next-door neighbor Kyle, played by Charles Rocket, a fellow “SNL” alum. Kyle develops an immediate psychosexual obsession with Pat and their enigmatic sexual identity. As the film progresses, he’s found holed up behind a telescope and a wall of photos under the shadows of Venetian blinds. It’s one part Rear Window, one part Vertigo and one part Blow-Up, all of which conflate cinema, desire and the will to knowledge, and two of which revel in the sublime absence of truth. If we were to give It’s Pat more credit than it deserves, we could extend these textual operations through Michel Foucault by way of Judith Butler, as Kyle chases the mirage of gender’s “truth.”

More interesting is how Kyle functions within what Camille Paglia, in a bizarre cameo, calls “the Pat phenomenon.” Kyle is, basically, the logical extreme of everyone else, preoccupied with Pat for no discernible reason other than their gender ambiguity. Rendering him as a lantern-jawed square in pleated khakis works as a sly dig against Republican culture warriors, whose determination to police “immoral” lifestyles was as transparently prurient in the 1990s as it is now (see: Pat McRory, Rick Santorum, every Republican Senator to cruise for sex in a public restroom).

His fascination leaves him empty-handed, and of course it does: The film emphasizes bluntly and often that Pat is actually boring in the extreme. Pat and Chris’s courtship is based on a shared affinity for plaid and sunny days; when Kyle cracks the code to Pat’s well-guarded diary, the deepest, darkest secret he can find is Pat’s admission to not having vacuumed under the sofa since moving in. Additionally, as some reviewers complained at the time, the film expands upon Pat’s character rather unflatteringly, presenting them as a boorish narcissist. This is another keen move: Pat’s gender ambiguity invites fascination they would otherwise not deserve in the least, but becomes too deluded by the attention to understand that. Pat’s blindness to social cues and boundaries is especially ironic, since it prevents them from registering Kyle’s thorough invasion of their privacy.

Theoretically, these should add up to something worth watching. Alas, It’s Pat is also a relic in that it hails from the heyday of films based on “SNL” characters. The success of Wayne’s World begat a full decade’s worth of notoriously bad attempts to milk 80 minutes and a good opening weekend out of five-minute sketches. (One exception, according to cultists, is Al Franken and Harold Ramis’s Stuart Saves His Family.) It’s Pat is as dreary and listless as any of them, and indeed it tanked spectacularly with just over $60,000 at the box office. The script shows no signs of Quentin Tarantino’s uncredited rewrite, trading in standard issue gags about excessive saliva, falling down stairs, cracked nuts and bananas-in-pockets. It even drags Dean and Gene of Ween—both terrible actors, astonishingly—onstage to bolster Pat’s delusions of grandeur and fill some screen time with a couple songs. The film looks like it was made in about a week between sets borrowed from other films and the streets of Los Angeles. Even the Mark Mothersbaugh score sounds phoned in.

Is the film transphobic? That is probably for trans and genderqueer people to decide, but I would argue that it isn’t. Sweeney’s extended bit of business as Pat is adenoidal and shrill, but Dave Foley, as Chris, provides a gentle, soft-spoken counterpart, recalling the sensitive drag performances on “The Kids in the Hall.” More important is that neither of them understand themselves as gender non-conforming; indeed, they may not know such categories exist. When Pat is forced to face the fact of their gender identity following a chance encounter with a gang member lacking in the strained decorum of the film’s other characters, they experience crisis. But after shuffling through a roster of masculine and feminine presentations, Pat settles on their original, androgynous, Brillo-headed look, deciding this is their “true gender.” Their true gender, in other words, is no gender at all. Seems pretty affirmative to me.