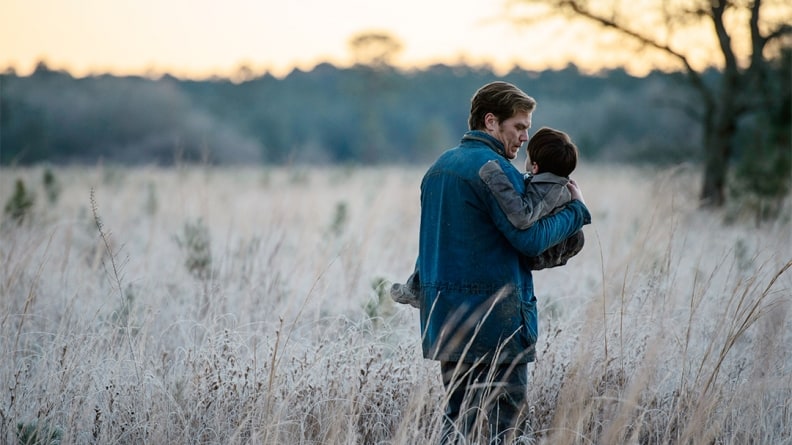 Midnight Special has a fiercely modern style informed by a quasi-nostalgic admiration for the work of Steven Spielberg and John Carpenter.

The latest collaboration between director/star duo Jeff Nichols and actor Michael Shannon sees the pair exploring the outer limits of their respective talents through the lens of science fiction. From the outset, Midnight Special has a fiercely modern style informed by a quasi-nostalgic admiration for the work of Steven Spielberg and John Carpenter. Though there are a few visual touchstones that call to mind JJ Abrams’ similar obsession with the Amblin era (the blueish, Super 8-esque tint of the cinematography and some spoilery conceptual tethers to Brad Bird’s Tomorrowland), the film stands on its own as more than an exercise in homage.

Shannon stars as Roy, a solemn, driven man ferrying his special son Alton (Jaeden Lieberher) across the country. Alton, the film carefully unveils, isn’t like other boys and displays a mixed cocktail of superhuman abilities that expand in scope as the plot sees fit. Roy’s friend Lucas (Joel Edgerton) is also along for the ride, providing tactical muscle on their quest. They’re followed closely by denizens of The Ranch, a mysterious cult led by Sam Shepard’s Calvin Meyer, who think the boy is a messiah and the allied government forces who think Alton is a weapon. Like Roy and Lucas, the film has to wage a war on two fronts, exploring truly unsettling themes of hope and faith through The Ranch subplot as well as executing frustratingly straightforward E.T. cosplay with the FBI/NSA chase.

The film’s most engrossing element is the narrative’s dedication to economy. As the particulars of Roy’s predicament unfold, a fair amount is left to the viewer’s imagination, with a lean and mean recounting of events leaving pregnant space to ponder the many implications of Alton’s existence. There’s a grounded feel to these early sequences of a ’70s Chevy speeding along the highway under cover of night that’s as thrilling as it is pitch perfect movie iconography. It feels at once an extension of our real world and a charming, drive-thru cinematic recreation. There’s a deliberate mixture of traditional genre world building blended with a rustic, indie sense of pace that continuously lulls you into a quiet, contemplative tone before blasting you with percussive explosions of action and violence.

Midnight Special’s first half walks this tightrope well, maintaining a sharp balance between stoking intellectual discourse on the cost of true belief while not drifting too far from the accepted tropes of this brand of sci-fi. There’s something genuinely frightening about the men from The Ranch and the obsessive verve with which they covet Alton. Lieberher portrays the gifted child with a blank-slate innocence, attacked on all sides from these lost men clinging to a fundamental misunderstanding of his true nature. The real horror settles in once Roy’s own personal zealotry begins to dovetail in terms of passion, showing a side of faith that’s equally, if not exceedingly, terrifying.

The sequences with the government provide some welcome levity, particularly with NSA agent Paul Sevier, played with gusto and heart by Adam Driver, here invoking the kind of presence Jeff Goldblum brought to Independence Day, or a more playful Truffaut in Close Encounters of The Third Kind. His quirky charm is the closest the movie comes to winking Spielberg fan service, but his presence is felt at exactly the point the film’s flirtation with dread veers towards unsightly consummation. Likewise, the introduction of Kirsten Dunst as Alton’s mother helps to balance out the fiercely masculine tenor of Roy’s quest to let in just the right amount of maternal sincerity. It’s through her scenes that we begin to see Alton as an actual person and not an adorable MacGuffin with glowing eyes.

Once Alton’s true nature and purpose are revealed, much of the film’s slow churning drive dissipates. This strengthens the emotional connection between Roy and Alton, giving Michael Shannon some of the most stirring displays of humanity he’s ever committed to celluloid, but it saps the film of its unique edge. Up until this turning point, Midnight Special is a throwback thriller with a distinct voice and challenging tone, but after, it devolves into a comforting, well-shot retread racing towards a conclusion so foregone as to be anticlimactic. The conclusion is so telegraphed that even the last ace up Nichols’ sleeve falls flat, despite being visually arresting, because it doesn’t answer or address any of the compelling questions the film has heretofore posed.

Really good science fiction uses genre storytelling to create extravagant explorations of real world concerns, which Midnight Special starts out performing with ease. Eventually, however, this ride is shown to have no meaningful or resonant destination to effectively put a bow on the scenes that precede it. The entire cast delivers strong work, but the aimless script doesn’t provide them with enough to cross the finish line.