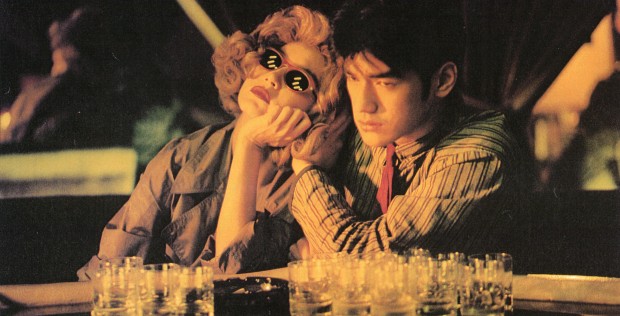 Chungking Express was Wong Kar-wai’s US breakthrough and it’s easy to see why.

In a 1995 interview, director Wong Kar-wai said to Cahiers du Cinéma, “There’s one thing that doesn’t ever change, and that’s the desire people have to communicate with others.” Wong’s films don’t always communicate effectively; his 1994 wuxia film Ashes of Time confuses even the director’s fans. But the movie he made during a two-month break from editing that failed genre exercise communicated his artistry with an almost instinctual glee that transcended language.

Chungking Express revealed an ephemeral magic in the most mundane of big city locations: a Hong Kong fast-food counter. The setting is thousands of miles away from the shores where American moviegoers first discovered it, but it seems perfectly familiar. These are the kinds of place where thousands of strangers pass by every day, most of them never to encounter each other. In this microcosm of Hong Kong, set three years before the handover to China, two thwarted love stories transpire.

In the first story, Cop 233 (Takeshi Kaneshiro) is an undercover officer who’s not ready to admit that his relationship with May, whom we never see, is over. He contrives an unusual test to determine when to let go: for 30 days, he goes to his neighborhood Circle K and buys a can of pineapple that expires on May 1, 1994. In the middle of this perishable consumer countdown, he falls for a mysterious woman in a blonde wig (Brigitte Lin), who happens to be a drug smuggler.

In the film’s second and more appealing narrative, a uniformed officer we know only as Cop 663 (Tony Leung) places an order at a fast food counter we see in the first story. He orders a chef salad for his girlfriend every day, but the shop owner suggests he get her something different. Unfortunately, after the cop brings her fish and chips, the choice in food makes her realize she has a choice in men, and she leaves him. But this lovelorn law enforcer has another choice in the form of new snack bar worker Faye (Faye Wong), who’s obsessed with the Mamas & the Papas hit “California Dreaming” and falls for the uniformed regular.

The movie is filled with small gestures that immerse us in a cinematic world filled not just with sound and vision, but smell. On a hot night at the shop, Faye turns a portable fan on her face as 663 walks away from the counter, as if luring him in with her scent. She wipes down a glass partition as Leung is on the other side, as if she’s caressing an image on the television. In one of the film’s most striking shots, the camera holds on a long shot of Faye at one end of the counter, yearning for 663 on the other end; crowds pass before them in a blur, but they remain still as if in a living tableau. It’s a poetic encapsulation of romance, and it’s also something of the film’s mission statement: if you could focus on two people in the middle of the passing crowd, what beauty would you see?

The story of Cop 233 and the cans of pineapple, reportedly handled by cinematographer Andy Lau, is shot at the breakneck, grainy pace of a crime thriller with the camera weaving in and out of spaces almost instinctually, as if involved in a dance with the film’s actors just to get out of their way. But the story of Cop 663, reportedly helmed by Wong’s regular cameraman Christopher Doyle, is more fluid, following its characters more gently.
The divide between the film’s two narratives seems abrupt at first, but it has been suggested that the stories take place at the same time. Both Faye Wong and Tony Leung make brief appearances in the first story, the former memorably walking out of a shop with a gigantic stuffed Garfield the Cat. It’s a cute pop culture reference, but the Monday-hating feline resonates with another Mamas & the Papas hit, which fits seamlessly with the film’s grand theme of time. The two narratives seem like back-to-back episodes of an unusual television show.

Chungking Express was Wong Kar-wai’s US breakthrough and it’s easy to see why: from its photogenic actors to its pop soundtrack and breezy visual style, the movie is a lighthearted thrill, visceral, romantic and fresh. Its characters may be fixated on the ravages of time: Cop 233’s obsession with expirations dates, Cop 663’s lamentations over a worn bar of soap and a frayed washcloth. But love transforms all, as we see when Faye sneaks into 663’s apartment, redecorating and switching out labels on the canned food in his pantry: when he eats a mislabeled can of sardines, it’s as if he was trying them for the first time. It’s the funniest part of the movie, and the most profound: she’s changing his taste buds, and his life. Despite familiar themes and images, Chungking Express doesn’t taste quite like any other movie; it’s as if the director had changed labels on the viewer and allowed us to discover something new.