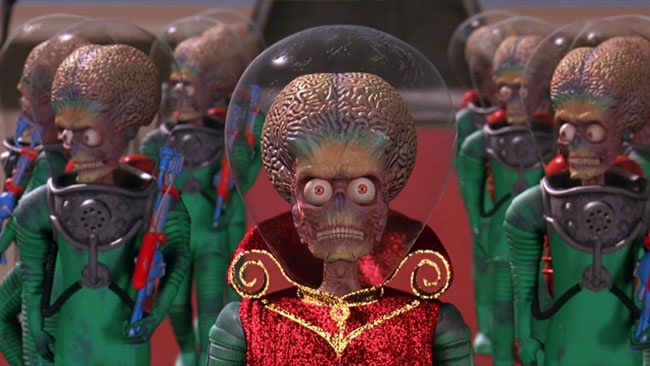 Mars Attacks! is left to duke it out with Planet of the Apes and Dark Shadows as Burton’s most forgettable effort.

Tim Burton should’ve seen the writing on the wall when Johnny Depp turned down a role in Mars Attacks!. Sure, by 1996, the forever-linked actor and director had only previously worked together twice (a number of collaborations that they would quadruple in the next two decades). But the duo was fresh off what remains one of Burton’s most critically-acclaimed films, Ed Wood. Perhaps Depp didn’t see the point in satirizing the sci-fi schlock the namesake figure of that 1994 film embraced so earnestly. Whatever the case, he was better off letting Michael J. Fox take that throwaway role as ray-gun fodder. Despite a modest modern-day cult following, Mars Attacks! bombed at the box office and pretty much turned out to be an embarrassment for everyone involved.

Culling the subject matter for the film from ‘60s era trading cards of the same name (minus the punctuation), Burton’s attempt at parodying B-movies with an absolutely bonkers roll call of A-listers presents an odd strategy. Typically, a parody is meant to confront a superiorly-regarded artifact and take it down a peg. Instead, Mars Attacks! deploys Hollywood elites in a farce that simply embodies the wooden acting and overall shabbiness of B-movie storytelling without much else to say. Originally, Burton wanted to utilize stop-motion animation for the amply-brained invading Martians. This would’ve neatly called back to both Beetlejuice and A Nightmare Before Christmas, while also paying homage to the work of Ray Harryhausen. In fact, in keeping with the B-movie aesthetic the film sought, Burton said he “wanted to make [the special effects] look as cheap and purposely fake-looking as possible.” Instead, after extensive workups, Industrial Light & Magic was tapped to use computer animation.

Though the big-eyed, skull-faced Martians do turn out to be one of the few legitimately fun aspects of this film (with effects that stand up pretty well today), doesn’t sophisticated visuals sort of defeat the purpose of the whole project? The chintzy effects are instead reserved for the impact of the Martians ray guns on human flesh—which rapidly and awkwardly vaporizes until nothing is left but red and green skeletons (Burton bizarrely intended this to coincide with the film’s Christmas season release). Early drafts of the script called for the Martians’ ray guns to have a far more grisly impact, including severed appendages, melting skin, shredding flesh, bodily explosions and enormous holes blown through torsos and heads. Instead, this was tempered to keep the film at a PG-13 rating, though Paul Newman would still turn down the role of the POTUS because he thought the script was too violent.

As for plot, the title says it all. There are intentionally clichéd family stories involving a pre-breakthrough Jack Black. The U.S. government (helmed by President Jack Nicholson and FLOTUS Glenn Close) reacts to the obvious Martian threat in inept ways. Nicholson also plays a second role as a hammy Vegas developer for some reason. Annette Bening plays his new-agey wife. Danny DeVito shows up and acts crass. Pam Grier pops in. Sarah Jessica Parker has her head grafted to a Chihuahua. NFL Hall of Famer Jim Brown kicks some ass. But Mars Attacks! is not a plot-oriented film. It’s all about references to low-budget sci-fi fare, while incorporating Gremlins-level humor to its backwards-quacking interplanetary enslavers—the Martians’ annoying vocalizations were literally created by reversing duck noises.

What is meant as a spoof simply comes off as tonal inconsistency. Despite being set in the ‘90s, the film uses ‘50s-era military vehicles to ramp up the camp. There’s a somewhat subtle reference to Dr. Strangelove’s famous (no fighting allowed) War Room, but it’s unclear what’s incisive about spoofing a spoof. The ray guns clearly call back to 1953’s The War of the Worlds, but that was another film already rife with satirical commentary, and the pyrotechnics and visual effects were actually quite remarkable for its time period. Many other gags are almost painful to watch, such as a binary gender joke that could be construed as subversively progressive for the time if not for a labored pause for laughs. Still, there are a few legitimately fun gimmicks amid the ruins of Mars Attacks!. First Lady Glenn Close gets absolutely crumpled by a falling chandelier, and the bodiless heads of Pierce Brosnan (reminiscent of The Brain That Wouldn’t Die) and Sarah Jessica Parker passionately kissing as they roll around on the floor is worth a chuckle.

Mars Attacks! bombed woefully upon release. Domestically, the film grossed barely over half of its $70 million budget. An A-list ensemble aping B-movie material for no obvious ends, in some ways, almost feels like bullying. At the very least it’s piling on, because nothing feels like homage as much as it does a disingenuous effort to cash in on the not-so-novel premise of being intentionally crappy. Roger Ebert would say it best in declaring that “Ed Wood himself could have told us what’s wrong with this movie: the makers felt superior to the material. To be funny, even schlock has to believe in itself.” While Burton has always been rather hit or miss (especially with re-imagined stories), 20 years on, Mars Attacks! is left to duke it out with Planet of the Apes and Dark Shadows as his most forgettable effort. Those ray guns might come in handy after all.