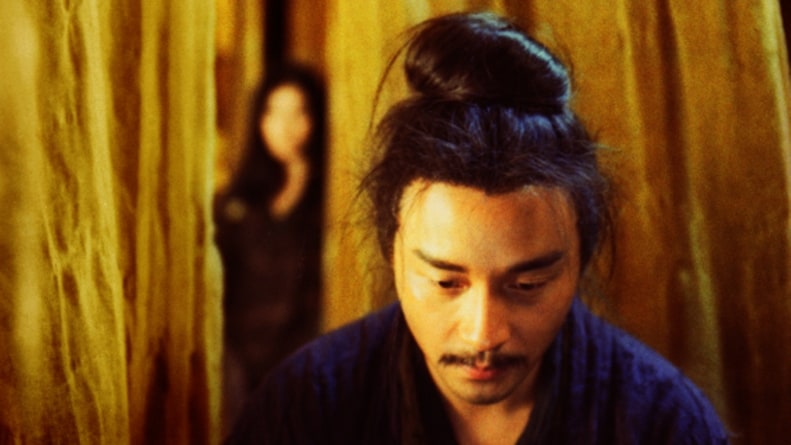 Ashes is an exceptional film and ought not be dismissed due to the director’s usual proclivity for genius.

As Pat Padua noted in last week’s Oeuvre entry, Wong Kar-Wai took a break in the editing of the 1994 film Ashes of Time to make Chungking Express, still one of the filmmaker’s most beloved works. Much like when Joel Coen and Ethan Coen paused during the writing of Miller’s Crossing to express their frustration through Barton Fink, the latter ultimately sucked up all the attention. Ashes of Time isn’t the masterpiece that Miller’s Crossing is, but it nevertheless deserves more consideration than it typically receives.

Part of the problem, of course, is due to the film’s distribution in ’94, the same year Chungking was released. Though it played in New York City, Ashes of Time never went to home video in the United States. In fact, the film is nigh impossible to get ahold of. The original elements were found in the late-2000’s to be deteriorating, at which point Wong took it upon himself to restore and recut the film and have it re-scored in order to preserve it for posterity (beyond the poor domestic home-video release). This version was released as Ashes of Time Redux in 2008, a perfect vantage point from which to re-consider the film, as it bridges the apparent gap between Wong’s more frenetic early work with the elegant, sometimes European art-house formalism of the films made in the 2000’s, revealing the careful sculpting that went into even his most fast-paced work.

But now is perhaps an even better time to take another look at Ashes of Time, with Wong’s most recent film, The Grandmaster (which also exists in multiple versions), being another idiosyncratic take on the wuxia genre, a classical but recently-revived genre of martial arts fiction. One aspect of the film that frustrates many is its complicated plot. The actual telling of the story isn’t an obstacle to comprehension; any given scene is quite clear in terms of characters and action. But the cat’s cradle of relationships that ties the film together—siblings and ex-lovers, foes and allies—is such a tangled morass that the viewer can easily lose track of the overall design.

Though based on “The Legend of the Condor Heroes,” the first part of a four dynasty-spanning trilogy by Jin Yong, Ashes bears little resemblance to its source. It does maintain the novel’s epic scale, but at a lean 93 minutes, the Redux version (as well as the original version, only slightly longer) has little breathing room. Tonally, this material is pitched somewhere between Shakespeare and a soap opera. Emotions are foregrounded, and characters’ hearts are filled with the searing pain of lost love or vengeance. One female character disguises herself as a man, and a magical bottle of wine that causes imbibers to forget their past is a key plot device early on. Multiple narrators relate their sections of the story. Even without a coherent sense of the plot—which can be attained with a second or third viewing—Wong’s usual theme of doomed romance is abundantly evident. One scene, in which a man and woman lie in bed, each imagining the other is somebody else, stands as one of the best of his career.

But as in Hou Hsiao-Hsien’s The Assassin and other recent interpretations of wuxia, the convoluted plot in Ashes of Time is secondary to the emotions of the characters and the spectacle of flying bodies against gorgeous landscapes. Shot by repeat-collaborator Christopher Doyle, Ashes evokes the barren Gobi Desert with harsh, washed-out oranges and stuttering frame rates while zoetrope-like shadows fill the interiors. Gestures are highly specific, and the score, featuring traditional Chinese instruments and an extended-techniques performance by Yo-Yo Ma, comes in full-force to underline pivotal moments. At times one could mistake this for parody, but Wong’s earnestness wins out in the end.

One of the most unusual and striking choices Wong makes with regard to the film’s genre is to shoot and edit the fight scenes—many of which take place toward the end of the film—in an impressionistic manner that obscures the action. Wong brought in Hong Kong legend Sammo Hung (Prodigal Son, Pedicab Driver) to choreograph the fights, but the intricacies of these sword battles are often vague. This may seem almost perverse, like forcing someone to look at the Mona Lisa through binoculars, but it speaks to Wong’s integrity as an artist. Rather than simply creating an effect with quick cuts and camera swishes, Wong abides by Ernest Hemingway’s famous “Iceberg Theory”—that a writer should only make the “tip” of the “iceberg” ( meaning action) visible while the majority remains submerged. This normally relates to how much information is revealed to the reader (or viewer), but in this case, there is actually a physical reality that’s being obscured, corresponding perfectly with Hemingway’s metaphor. In other words, the disorientation is grounded in the real.

I won’t make an argument for Ashes of Time as one of Wong’s best films; enjoyable as it is, one can easily let it go after subsequent viewings of his true masterpieces like Happy Together and especially 2046. But, by just about any other metric, Ashes is an exceptional film and ought not be dismissed due to the director’s usual proclivity for genius. Let us be thankful that it was saved.