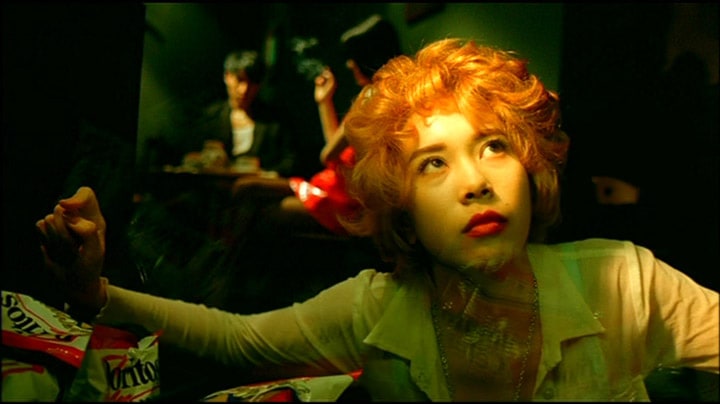 If love is fleeting, resolve to treasure the feeling of both having it and losing it.

Frequently cited as the film in which Wong Kar-wai parodies himself, Fallen Angels, released in 1995, shares more than a few structural, stylistic and narrative choices with Chungking Express. In fact it grew out of a storyline that was ultimately cut from that film. It’s the closest to a gangster film the director had come since As Tears Go By. But the crux of its message stakes a vital place in Wong’s oeuvre of films about unrequited love and alienation in a dizzying, bustling world.

As in Chungking Express, Wong interweaves two stories. Hired assassin Wong Chi-Ming (Leon Lai) rarely sees his partner (Michelle Reis), who is hopelessly in love with him. Mute prison escapee Ho Chi Moo (Takeshi Kaneshiro) it entangled with Charlie (Charlie Yeung), a perpetually sobbing girl still hung up on her ex. The latter carries on the wacky free-spiritedness that was so integral to Faye Wong’s character in Chungking, with Ho Chi Moo living a madcap slacker existence breaking into other people’s businesses at night and forcing unwilling customers to pay him (usually to rein in his insane behavior and leave them alone).

The two stories couldn’t be more dissimilar, and Wong employs distinctive style choices for each. His beloved blurred background shots that alienate his troubled protagonists naturally make appearances throughout, as do some jump cuts. Christopher Doyle once again handles the cinematography, but Wong Chi-Ming’s story is told in a series of dark, nearly chiaroscuro scenes that fight the urge to revert to slow-motion at every turn. The director’s languid R&B music cues further emphasize the cool noir aesthetic. The film’s many bloody shootout scenes alternate between frenetic camerawork and gratuitous slo-mo. Segments that feature Ho Chi Moo, however, exhibit much more visual stability. A consummate slacker, Ho’s complacency is driven home by relatively stagnant shots of him manning various food stalls or the handheld camera that tracks his teary interactions with Charlie.

Fallen Angels is also notable for its heavy use of voice-over narration (another Wong trademark), which allows viewers to go that much deeper into the characters’ psyches. Traditional dialogue is almost completely absent here, but Wong makes the decision work to his benefit in recounting these stories, with that vignette structure lending itself to an omniscient narrator. As a character, Ho Chi Moo requires such an exemption from dialogue. While voice-over narration is common in Wong’s films, it’s interesting that the awkwardness of Ho’s silence is strikingly, even glaringly, obvious in the scene when he first meets Charlie. We see him attempting to hand out flyers for God knows what business and mime what looks like drinks. He looks rightly insane. But he’s a convenient shoulder for Charlie to cry on. Sadly, that’s all he ever is to her.

As ever, the director infuses this film with a heavy dose of unrequited love, but Fallen Angels has the honor of ending on the best visual encapsulation of Wong’s philosophy on the nature of human intimacy. Wong Chi-Ming is perfectly aware that his partner has feelings for him, but the two separately conclude that, to function as efficient killers, “partners should rarely get emotionally involved with each other.” Like the director’s other protagonists, Wong surmises that relationships that don’t last are merely instances of people on prolonged stopovers, eventually to reach their final destinations. It’s a sentiment that speaks to Wong’s larger belief that, just as most relationships will end, every moment should be appreciated until that end.

Fallen Angels ends with Wong’s partner grabbing a ride home on Ho Chi Moo’s motorcycle, musing “I hadn’t ridden on a motorcycle in a long time. Actually, I hadn’t been that close to a man for a while. The road wasn’t that long, and I knew I’d be getting off soon. But at that moment I felt such warmth.” The camera drifts upward as a trail of Ho’s cigarette smoke dissipates into the Hong Kong night air. If love is fleeting, resolve to treasure the feeling of both having it and losing it.