April 17, 2021
Home Lists List Inconsequential The Most Romantic Films of the ’90s 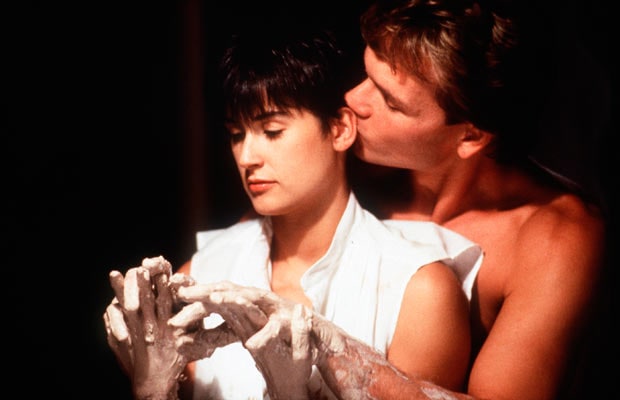 The Righteous Brothers, some clay and two beautiful lovers. All Ghost needed is that one famous sequence featuring Patrick Swayze and Demi Moore passionately loving one another while “Unchained Melody” played. But Ghost is more than that. It tells us that love can exist from beyond the grave, that even in the face of tragedy true love can crossover from this mortal coil to the darkness on the other side.

David Lynch may not be on anybody’s short list of most romantic directors. This crime thriller is populated with a typically Lynchian cast of bizarre characters, but it also boasts one of the sexiest soundtracks of the ‘90s. Any movie whose soundtrack gives the world Chris Isaak’s “Wicked Game” belongs in the pantheon of romantic road movies. 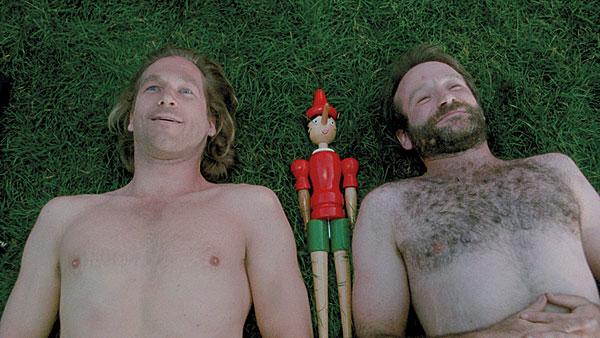 Part bromance and part redemption story, The Fisher King is also Terry Gilliam’s love letter to New York City. Just watch the final sequence where Jeff Bridges and Robin Williams lay naked in a Central Park field, the city’s romantic skyline dwarfing them. Fireworks shoot off in a fantasia, a celebration of a vibrant city, warts and all. Both men have found true love (not with one another) and even if it’s concrete jungle, New York is included in that festival of passion.

“Who could ever love a beast?” We like to imagine that love knows no superficial, physical bounds, but that’s simply not the case. It is in Disney’s Beauty and the Beast, however. For that, the movie earns big romance points, not to mention the wonderfully believable way Belle and the Beast’s evolving relationship is handled.

Ignoring the existence of Michael Mann’s director’s cut of The Last of the Mohicans, the theatrical release is, hands down, one of the most romantic movies ever made. Hawkeye (Daniel Day-Lewis) literally runs up a mountain to save Cora (Madeleine Stowe) from certain death at the hands of her Huron captors to the Clannad song “I Will Find You.” 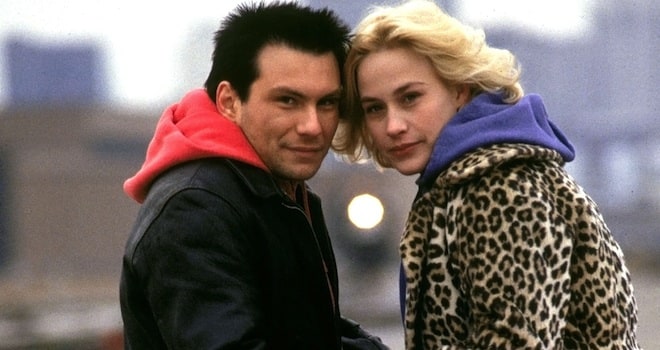 Love makes people do crazy things. Falling in love with a call girl named Alabama (Patricia Arquette) and running off with her pimp’s cocaine to live a life of luxury is pretty high on the list of behavior not recommended if you want to live much longer. Clarence (Christian Slater) also takes advice from a hallucination of Elvis Presley, so it’s not surprising. But Clarence and Alabama’s love isn’t based on money, and the ending is certainly the happiest of any movie penned by Quentin Tarantino.

Bill Murray isn’t the prototypical romantic lead, but in Groundhog Day he gets a virtual eternity to figure it out. Stuck in a time loop that forces him to endure his loathed Groundhog Day news reporting duties ad infinitum, cynical Pittsburgh weatherman Phil Connors (Murray) experiences the ultimate unrequited love when his endless efforts to woo his producer, Rita (Andie MacDowell), are not even remembered one day to the next. Phil escapes the time loop and wins Rita only when he learns to love humanity as well, making Groundhog Day a change-of-heart romantic-comedy worth revisiting again and again. 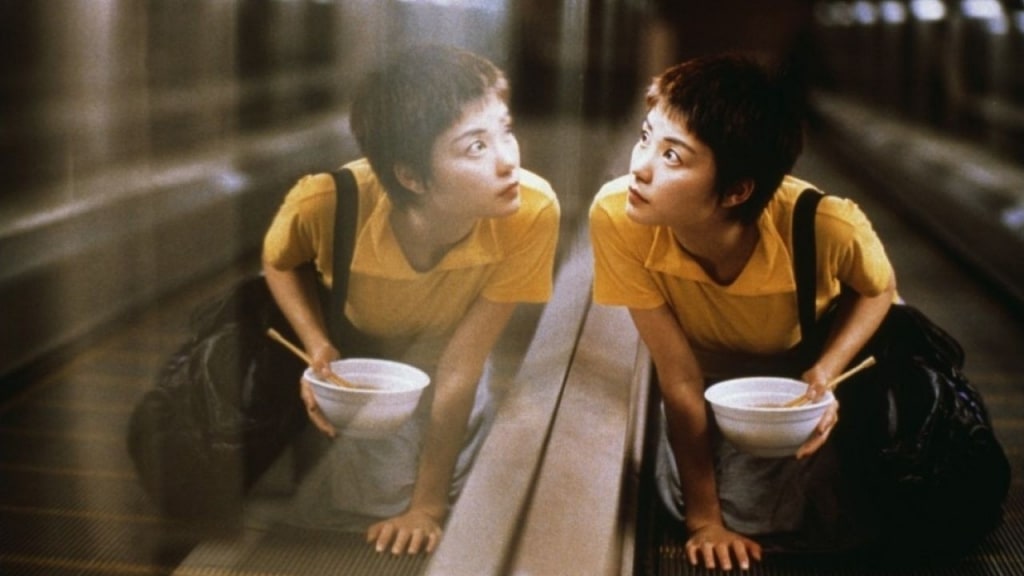 Chungking Express is a movie steeped in unrequited love, much like other Wong Kar-wai fare. Whether it’s Faye (Faye Wong) insinuating herself into the life of a lonely cop (Tony Leung Chiu-Wai) or He Qiwu (Takeshi Kaneshiro) wallowing in rejection, romance is an aspiration, and its pursuit is a catalyst for change and personal renewal. Their stories may not end in romantic bliss, but the takeaway is that intimate personal connections can come from the most innocuous of meetings. 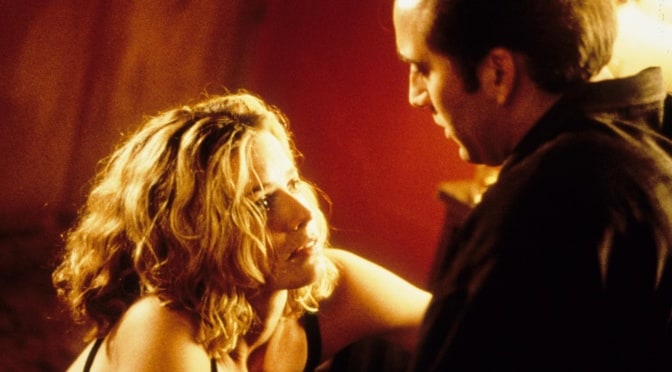 Some of the most romantic movies end in tragedy. Nicolas Cage’s character is determined to drink himself to death. Elisabeth Shue’s battered prostitute is there to help him transition from this world to the next. What spells true love? Keeping someone close out of fear or letting them go into the blackness and losing them?

An old truck sits at an intersection in the rain. The driver waits for the woman sitting with her husband in the vehicle behind him to jump out and run to him, continuing the torrid affair they had recently ceased. In that truck is a lifetime of adventure and passion. But is contentment and safety worth more? What is the correct choice? The decision has haunted viewers for more than 20 years. 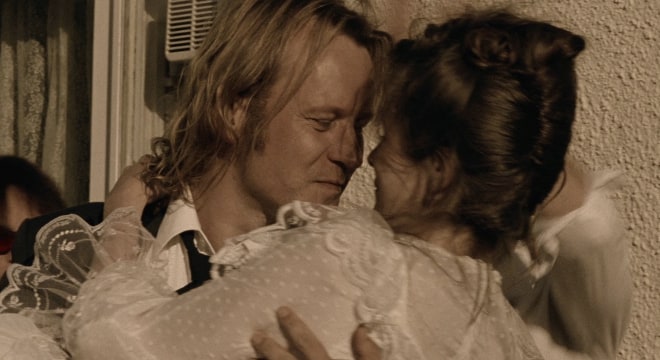 This is a love story in the grandest sense. Emily Watson’s Bess achieves self-actualization through a sexual awakening experienced at the very sight of Stellan Skarsgård’s Jan. Her genuine emotional attachment to Jan is tied directly to her involuntary physical longing. What she yearns for is to be fully enveloped by her lover, to forge an authentic and undeniable connection in every sense of the word. Such loss of self in the other is her liberation, and, though it ultimately results in her death, this is just what Bess achieves. What is more romantic than self-realization through love for another?

Claire Danes and Leo DiCaprio kiss at a costume party. She’s wearing angel wings. He’s dressed as a knight. It’s really hot. They kiss in a hallway, a swimming pool, a bed chamber and finally, a tomb, where these two star-crossed lovers were dumb enough to fall so in love that suicide was the only option. Let us salute our Elizabethan bonnets to these self-destructive teens, “For never was a story of more woe, than this is Juliet and her Romeo.”

“We live in a cynical world,” Tom Cruise says. His eyes are red. He’s addressing Renée Zellweger in an impromptu attempt to get her back. “I love you. You complete me.” She cuts him off. You know the line, and if you’re not at least a little touched, you must be heartless. I mean it. This schmaltz is golden. Cameron Crowe might seem like an ordinary, dad-type but he’s got the mushiest heart in Hollywood. In Jerry, the chemistry between Prince Cruise and then-undiscovered Zellweger is sweet, earnest and strangely unforgettable. It completes us.

As Good as It Gets is the last good movie James L. Brooks made and it functions like an opposite-day romcom. Jack Nicholson’s Melvin Udall is the antithesis of the protagonist you would expect. He’s old, insufferable and problematic as hell, but he’s charming enough to make an impression on Helen Hunt’s Carol. More reassuring than most romances, the film proves that even misanthropes deserve love.

Forget the iceberg, the doomed ship and the dead people (1,503 to be exact). Titanic is 193 minutes of sex. It starts with Leo’s loose blonde locks blowing in the breeze. Next, it’s Winslet’s bosom, concealed beneath a luxurious, brocaded dress which somehow promises to come off. Cue Céline Dion and add some of that James Cameron magic and you’ve got a 200 million dollar love story that’s like the best make-out session of your life. It’s sumptuous, over-the-top and totally thrilling (a.k.a. the best romance ever).

Quentin Tarantino’s best work, an adaptation of Elmore Leonard’s Rum Punch, isn’t principally a romance, but the unrequited attraction between the titular Jackie Brown (a career best Pam Grier) and her bail bondsman Max Cherry (Robert Forster) is so unique. Neither performer is in their ‘70s exploitation era prime, but they each bring the weight of their past roles to this slick crime thriller, bridging a chasm of regret to form this palpable connection. You’ll hear The Delfonics the way same again.

Before he was Batman, Ben Affleck was a schlubby stand-in for writer/director Kevin Smith’s allegedly autobiographical tale about falling for a woman whose sexual experience proved too daunting to accept. Often miscategorized as a movie about a guy dating a lesbian, Chasing Amy is really like a nerdy, ‘90s Woody Allen flick, characterized by lengthy, drawn-out conversations and splitting hairs over the gender divide. Joey Lauren Adams would never get a role as meaty as Alyssa Jones again, which is a shame, because her turn here is so iconic. 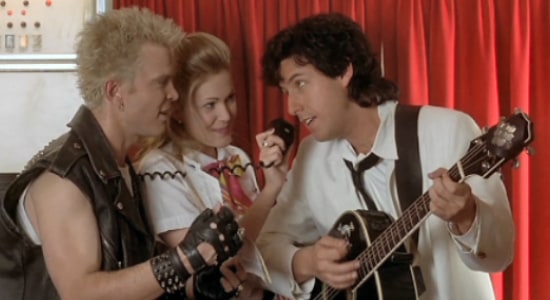 This pitch perfect ‘80s period piece is tied with another timeless romance (Punch Drunk Love) for being Adam Sandler’s best film, largely because it’s the most earnest. Sandler’s lovable loser routine works best when he’s paired with a game love interest who refuses to get overshadowed by his shtick (Drew Barrymore) and when the script is more concerned with character than dick jokes.

Is Out of Sight romantic? It is certainly one of the sexiest films of its era. It fills the frame with George Clooney at his most charismatic and Jennifer Lopez at her most electric. One cannot help but be seduced by the two of them as they work to seduce one another. The pivotal restaurant scene particularly stands out. Even the camera is enamored with them. Out of Sight is sharp, stylish and transgressive. It is set mostly at night and feels like something to be savored in secret. Its sex appeal is absolute.

While today’s online dating culture may be more frightening than romantic, You’ve Got Mail used the earliest iteration of falling in love by way of screen and keyboard and created a story worthy of breaking out a VHS player to watch almost 20 years later. With Kathleen Kelly (Meg Ryan) and Joe Fox (Tom Hanks) battling over their bookstore businesses in real life while simultaneously charming each other via AOL, the passion is enough to make one reconsider their aversion to Match.com. When Joe says, “Don’t cry, Shopgirl,” in the final scene he might as well passing a tissue to the audience.

Kidnapping might not exactly be a meet-cute, but it sure worked out well for Billy Brown (Vincent Gallo). Fresh out of prison, Billy nabs Layla (Christina Ricci) at her tap dance class so that he can convince her to pose as his wife to impress his Buffalo Bills-obsessed mother (Anjelica Huston) and aloof father (Ben Gazarra) who don’t even know (or care) where he’s been all this time. Billy is painfully repressed, the result of almost cartoonish family dysfunction. Layla immediately looks past his bristly persona and embraces his inner child in this film of twisted courtship and unexpected love. 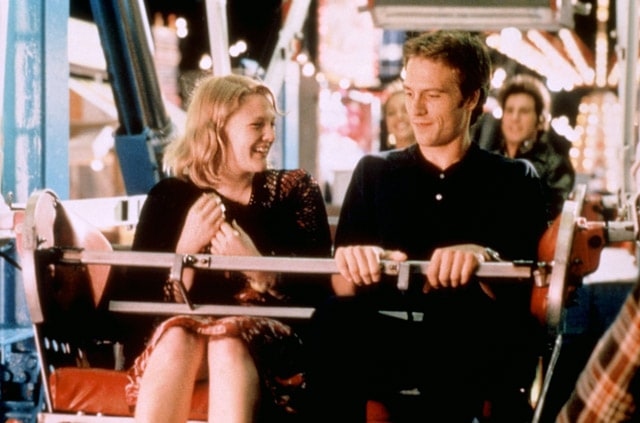 Never Been Kissed takes the hot-for-teacher trope and makes it palatable, placing Josie (Drew Barrymore) as an undercover reporter in Mr. Coulson’s (Michael Vartan) classroom. Sure, he may fall for her believing that she is actually seventeen. But Barrymore makes it near impossible not to root for the nerdy, endearing Josie to get her first real kiss, even if it is from her English teacher. Add all that wonderful “natural” lighting found pouring through the windows in Mr. Coulson’s classroom and a sappy Beach Boys song to accompany the kiss and you have yourself a prime setting for a bookish romance.