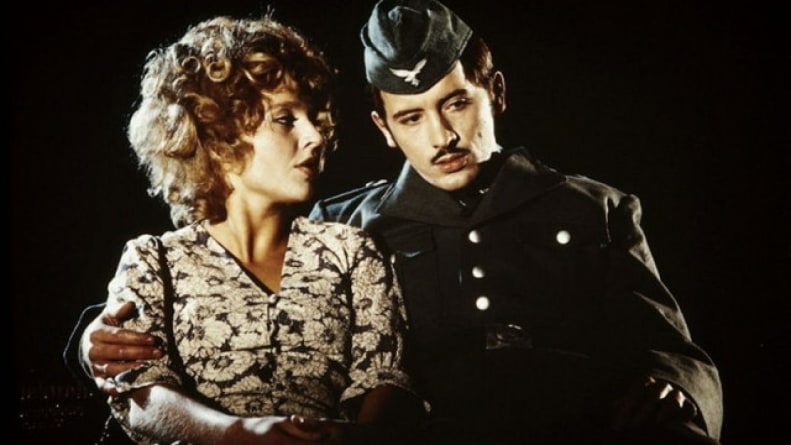 Pioneers in Ingolstadt will be a joyful, if not revelatory discovery for any Fassbinder fan who has yet to see it.

Rainer Werner Fassbinder left behind over 40 feature films when he died in 1982, so it’s understandable that some of them get overlooked. While Ali: Fear Eats the Soul and The Marriage of Maria Braun have entered the canon, masterworks such as Satan’s Brew and Mother Küsters Goes to Heaven are primarily the domain of Fassbinder completists. Still, Pioneers in Ingolstadt (1971), the final film made during Fassbinder’s avant-garde period, isn’t just overlooked—it’s looked at askance. Even leading Fassbinder scholar Thomas Elsaesser devotes just a single dismissive paragraph to it in his book Fassbinder’s Germany. Fassbinder took an unprecedented eight-month break after shooting Pioneers, and the common narrative is that he’d burned out his creative energy until discovering Douglas Sirk and moving into the next—and most highly regarded—phase of his career. This may be true to an extent, but it doesn’t mean the film is without value.

This first period of Fassbinder’s career is marked by the influence of Bertolt Brecht, and this finds its fullest expression in Pioneers in Ingolstadt, which is based on a play by Marieluise Fleißer, a close associate of Brecht’s. It is the most theatrical of Fassbinder’s early films (and the last to bear the “Antitheater” name), which is saying a lot when many of his preceding 10 films were based on plays and were extremely minimal in terms of staging and mise-en-scène. Indeed, Dietrich Lohmann is much more limited as a cinematographer than Michael Ballhaus, the virtuoso who joined forces with Fassbinder starting with The Merchant of Four Seasons; but Fassbinder’s compositional sense is nearly unparalleled anywhere in cinema, and even in the much-derided Pioneers, the simple camera set-ups and rigid blocking are unmistakably the product of a singular visual intelligence.

Furthermore, the wooden performances and deliberate anachronisms stem directly from Fassbinder’s Brechtian intentions. One of Brecht’s innovations was the verfremdungseffekt, or “alienation effect.” The idea is that the audience, instead of becoming emotionally involved in a story and its characters, were to be kept at a distance, in order to consider them intellectually. Jean-Luc Godard played with this idea in a number of ways, but Pioneers in Ingolstadt is an example par excellence of the alienation techniques of Brecht’s Epic Theatre.

Fleißer’s play, written in the 1920s, was revised soon after under the guidance of Brecht, and then again in the late ’60s. The film’s lack of period specificity makes it impossible for the viewer to see it as a historical piece. The uniforms the soldiers (or “pioneers”) wear are stripped of anything that might identify a time period, and the presence of Günther Kaufmann, a black man, goes far beyond the theatrical convention of colorblind casting. A scene in which two characters stroll along a road, affording a view of modern cars, could be written off as laziness, but is part and parcel with Fassbinder’s alienation techniques.

But to what end does Fassbinder apply these techniques? Admittedly, Pioneers doesn’t have the most compelling story, and its Marxist class analysis is schematic and superficial. The film depicts three overlapping social classes: the upper class, the working class and the soldier class, and hierarchies exist within each. For example, the pioneers—staying in Ingolstadt to construct a bridge—clash with their commanding officer (Klaus Löwitsch), and the working women resent Alma (Irm Hermann), who plays fast and loose with the amorous soldiers, relying on them for financial support. Fassbinder often conveys the differences between these groups visually; in the first scene, as the soldiers march into town, Alma and Berta (Hanna Schygulla), a housemaid, watch among a group in the street while her employer (Walter Sedlmayr) and his son (Rudolf Waldemar Brem) look down from their window. But much of the film is set in a public park at night, where the women of Ingolstadt—including the naive Berta, who’s looking for true love—have affairs with the soldiers. Fassbinder devises a lot of two-shots of characters sitting on benches with darkness filling the frame, making the set look like that in an experimental theatre production.

Maybe it’s a weak defense of the film (and perhaps it is only for diehard Fassbinder devotees), but if viewed as one brick in the house Fassbinder built—as all his films must be—it is absolutely unmissable. Its overt theatricality wouldn’t be matched until the grating Bremen Freedom; its visual dexterity, while contained, matches any of Fassbinder’s best efforts; and there is pleasure, as always, in seeing a small group of Fassbinder’s large stable of actors working together. Fassbinder fans are an obsessive bunch, and they often devour each and every last one of his films, even the absolute worst (Bremen Freedom, Querelle). Pioneers in Ingolstadt will be a joyful, if not revelatory discovery for any Fassbinder fan who has yet to see it.