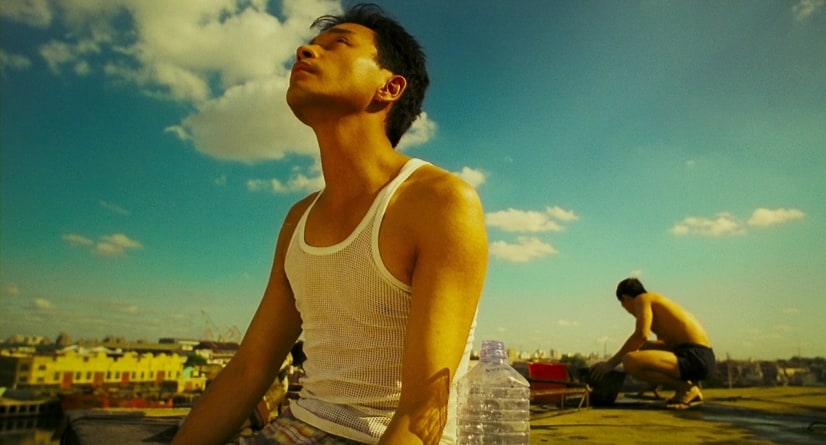 Happy Together is best described as transcendent.

In various ways, Wong Kar Wai’s Happy Together (1997) is a “transitional” film. When it was released, the Hong Kong director was in a state of egress, both stylistically and professionally. As the critic Jonathan Rosenbaum aptly notes in his review of the film, Wong had become somewhat ungrounded as a filmmaker. “Whether this happened between Days of Being Wild (1990) and Chungking Express (1994), during the two years it took to make Ashes of Time (1994), or between the latter two films and Fallen Angels (1995),” writes Rosenbaum, “Wong’s powerful organic flow…had atrophied into a slag heap of individual set pieces.” Perhaps seeking a new direction, Wong turned to a pair of characters similarly adrift. In Happy Together, dysfunctional couple Yiu-fai (Tony Leung) and Po-wing (Leslie Cheung) are once again resetting their relationship, traveling all the way from Hong Kong to “the end of the world” in Buenos Aires in hopes of finding themselves.

There, we watch the two men fall in and out of love with each other. They switch moods and outlooks seemingly without cause and certainly without warning. They express a constant desire for renewal, to start again. They’re difficult to nail down, and sometimes impossible to read, but you get the strong sense that they’re lost. Like the characters it follows, Happy Together is a film in search of a purpose, and it ultimately turns that very search into its sole purpose. Wong, one of the most instinctual filmmakers to ever live, turns virtually every shot into an investigation, and his ability to find and create beautiful images becomes almost unrestrained. If the film verges on self-parody, as some have claimed, it’s because the director is actively investigating what he values in his art and in himself. Happy Together is Wong at his most introspective.

Echoes of Wong’s previous work are felt throughout Happy Together. There are meta references to Ashes of Time and Chungking Express, and the director gives his usual stylistic flourishes extra layers of familiarity, like the fast-motion imagery of downtown Buenos Aires that openly recalls similar sequences in As Tears Go By (1988). Touches unique to the film abound, as well. Aided by cinematographer Christopher Doyle’s technical prowess, Wong unloads his aesthetic bag of tricks, including freeze-frames, color and texture shifts and digressive jump cuts. He doesn’t hold anything back, and to a degree, the film’s style seems to overwhelm every other aspect, creating a sense that if Wong just calmed the hell down, Yiu-fai and Po-wing might actually figure some stuff out.

But then that’s sort of the point. When the critic Shelly Kracier reviewed the film during the 1997 Toronto International Film Festival, she wrote, “The constant theme of Wong Kar-wai’s cinema is that the formal conditions of our experience have changed so radically that they compel us to live an entirely new kind of experience to fill them, to fulfill all of their promise and potential.” Like other Wong films, Happy Together utilizes multiple narrators, and chief among them is the director himself. It’s why his various stylistic quirks rarely feel like conceits or gimmicks; you get the sense that he’s conversing with his characters, as well as with the audience, and he’s using form and aesthetics as a sort of stage.

The idea is wistful, but it’s important to remember that Wong himself is an exceedingly wistful filmmaker, even if he occasionally masks his wistfulness with melancholy and stoicism. Happy Together is a sad and deeply nostalgic film, marked by the characters’ homesickness and deep sense of displacement, both literally and emotionally. The film’s nostalgia isn’t as explicit as the nostalgia found in In the Mood for Love or even something like The Grandmaster, but it is a dominant emotional current throughout. The audience never comes to fully understand just what the characters are nostalgic for, but that only heightens the sensation. Throughout his career, Wong’s most valuable gift has been his ability to tell us stories whose meanings and details evade us but whose feelings penetrate deeply.

There’s a German word for it: Sehnsucht. It can be translated as “yearning” or “pining,” but its emotional implications are tougher to convey. It’s a word for what it feels like to long for a place you’ve never been or an experience you’ve never had. Happy Together deals deeply in Sehnsucht, as Wong creates a formal space and emotional logic that might not exist in reality but seems completely tangible, erotic, sensational and heartbreaking on the screen. It’s the stuff of life, but it exists in a dream, and the best way to experience it, Wong argues, is through the cinema. Rather than “transitional,” perhaps Happy Together is best described as transcendent.